So I'm excited to tell my loyal readers that I have two opportunities for doing some first-hand investigation.

These sorts of things don't come along often, given that I live in a rather remote corner of the universe.  My house gives new meaning to the word "rural setting."  My nearest neighbors are cows.  I live, no lie, near the original "Podunk."  Yes, Podunk, New York is a real place, and it's just down the road.

Which means, of course, that I'm so rural I don't even live in Podunk. I live in the suburbs of Podunk.

So since hands-on inquiry of paranormal claims requires that there be people there to make the claims, it's not going to happen often around here.  And just in the last week, I have two opportunities, which, believe me, I'm gonna jump on.

The first came my way because of the peculiar experiences of a friend, who lives in the neighborhood on the other side of Podunk ("Podunk Heights").  Now, let me assure you right out of the starting gate that she is an eminently sensible person, down-to-earth, not prone to flights of fancy.  She and her husband bought a house a couple of years ago, and moved in with their two children, who are now three and five years of age.  And not long after they moved in, the children started to report strange stuff.

Both kids have said that they've been awakened in the middle of the night by "people."  Sometimes the people stare at them, sometimes they're walking around in or past the kids' bedroom... but sometimes the people actually make physical contact.  Just two nights ago, she tells me, her younger boy woke her up crying, and when she went to investigate, he said that someone had touched his neck and scared him.

Being a skeptic and a rationalist, my friend wondered if it could have been his blanket or pillow, or an edge of his pajama collar, or something like that.  She said to her son, "Was it a light touch, like something brushing your skin?"  And the little boy said, "No, it was a hand holding the back of my neck."

So at this point, my friend understandably freaked out a little.  She told me about it, since I'm sort of the local skeptic, and the suggestion arose that perhaps I could do a little bit of GhostBusting.  There are now apps you can download that do all of the paranormal investigation stuff -- detecting electromagnetic fields, making digital recordings of sounds (so as to pick up EVP -- electronic voice phenomena), and so on.  At first, she said, she was fairly reluctant to try this kind of thing because she was afraid of how she'd react if something showed up.  But given that her kids are having some kind of experience every week or so, she's decided that she may just give it a try.

So I might be called in to do some supernatural sleuthing.  My son, when he found out about this, was psyched, and says he'll be happy to join me.  This is a good thing, because despite being a skeptic, and virtually certain that we won't find anything, I'm also a great big wuss, so if there really was a ghostly manifestation, and I was alone in a dark house, I'd wet my pants and then have a stroke.  Having Nathan around will, one would hope, make this a less likely eventuality.

Now, allow me to reiterate; I have not gone all woo-woo.  One of the reasons my friend wants me to check this out is because we're both rationalists, and are pretty well convinced that the kids' experiences are the results of vivid dreams or night terrors, not hauntings by the Restless Spirits of the Dead.  Whatever happens, it'll be fun, and certainly worth reporting the results back here.


Not quite as close as Podunk is the little village of Newfield.  Newfield is about a half-hour's drive from my house, though, so it's still in the neighborhood, as it were.  And a friend of mine sent me a news story that tells of an encounter a couple of days ago between a Newfield man and Bigfoot.

The story comes from one John Swaney, who was out hiking with a friend in the Connecticut Hill area, west of Newfield, when they heard a terrifying sound.  Here's his account:


It was around 8.30 a.m., about an hour till daylight, an hour or an hour and a half.  We heard a noise... You could hear kind of a woosh!, woosh!, as if you are going through frozen grass.  That’s when we saw it, about 100 yards away, getting off the road and walking under a tree branch toward a thick patch of woods.

I could see the upper body, and as it was walking, it covered a lot of ground in between, you know, something that you and I would cover in two to three minutes.  This thing was enormous, with solid charcoal-black hair and four-foot-wide shoulders.

I could see like a shine to it, you could see the muscle mass to it.  Judging by the branches I saw it go under, and going back to that, it was at least 9-feet tall.  It had to duck down a little bit to bet under that branch.  The branch stood at 8 feet and 4 inches.  I never got a good look at the face, which is the most disappointing part of it.  I want to know what the face looks like.  I could see the cheek, the cheek was covered.

I was so scared that I dropped my hiking equipment, $200 worth, and left it behind.
I was too scared.  I was not about to go to look in the snow.  I just wanted out of there.

This is not the first time that a cryptid has been spotted in the area; the Connecticut Hill Monster has been reported off and on for the past couple of decades.  But this is the first recent sighting I've been aware of. 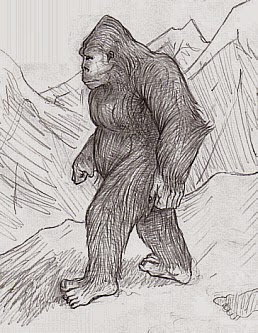 I've had this story sent my way twice, and one of the people who sent it to me is my pal John Sullivan, who does the wonderful weekly radio program Skeptical Sunday.  John is not only a skeptic, he's also a biologist, which makes him the kind of guy you want by your side in this kind of investigation.  Once again, we have the piss-your-pants-and-have-a-stroke potential of running into Bigfoot in the woods, so I'm hoping John and I can get together soon and have a look around.

So Podunk and environs turns out to be a happenin' place of late, affording me a not-to-be-missed opportunity to prove that I'm more than an Armchair Skeptic.  I'll definitely report here what happens during my ghost-hunting and squatch-seeking adventures.

Unless the results are positive, in which case my next-of-kin can take care of it.
Posted by Gordon Bonnet at 2:50 AM