Every once in a while, I'll run into an off-the-wall claim that admits of no particularly obvious explanation.  For example: have you heard about the town of Shingō, Japan, in Aomori Prefecture on the northern tip of the island of Honshu?  If you have, I'll bet it's for one reason:

It's where Jesus was buried.

There's a sign there that identifies the burial site: 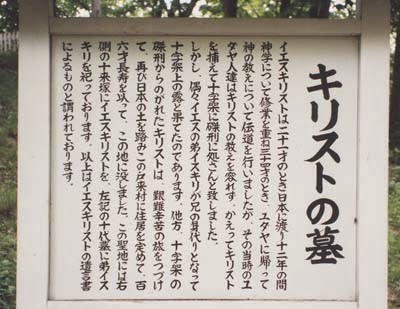 According to the claim, Jesus skipped town on the eve of the crucifixion, leaving his brother Isukiri to be tortured and executed in his place.  Isukiri makes no appearance in the bible, the people of Shingō admit; that's because he was intended to take Jesus's place right from the get-go, and needed to keep his identity secret.  The claim also helpfully explains the years of Jesus's life before his public ministry started, at age 30 or so.

He was in Japan, of course.

How he got to Japan from Israel is never really explained.  Last I looked, they're not all that close together, and in between lie such special attractions as the Himalayas, the Gobi Desert, and Siberia.  But despite all this, Jesus made the trip three times -- on the way out when he was a twenty-something, then back to Jerusalem when he started preaching, and then a final time to get out of what Pontius Pilate et al. had planned for him.

So while things didn't end so well for Isukiri, Jesus made out pretty well.  He married a local girl, became a rice farmer, fathered three children, and lived to the ripe old age of either 106 or 114, depending on who you believe.

And because he had progeny, some of his descendants still live there in Shingō.  The Sawaguchi family, specifically, claims descent from Jesus, something that they don't seem to think is all that amazing.  Jesus, they say, didn't perform any miracles once he arrived in Shingō.  He just settled down to be a nice guy and a solid citizen of the village.  Which takes some of the gravitas out of being a direct lineal descendant of the Son of God.

I find all of this pretty peculiar.  What could possibly be the origin of this story?  It seems to have started with Kyomaro Takenouchi, who in 1935 announced that he had found some ancient manuscripts that tell the whole story.  (They also, apparently, tell about Atlantis and the fact that humans are descended from aliens.  But another time for that, perhaps.)  There's an Association for the Study of the Takenouchi Documents, which explains them thusly:

The historical facts recorded in the Takenouchi Documents are extraordinary. Among them are the Sumera-Mikoto came to Earth from a higher world on Ameno-ukifune, the world government was located in Japan and the Sumera-Mikoto unified the world. The great holy masters of the world, Moses, Jesus, Mohammed, Shakyamuni Buddha, Confucius and Lao-Tsu were born from the five-colored races which branched off from the Japanese race and all went to Japan for study and training. These facts may seem absurd and contrary to our prevailing understanding of world history. However, the archaeological research of recent years has gradually revealed the true existence of ultra ancient civilizations which are all mentioned in the Takenouchi Documents.

Some serious ethnocentrism, here.  All the cool holy people came from Japan, or at least studied there.  Got it.

Of course, it's not like we can study the documents themselves.  The originals were confiscated by government officials during World War II, and subsequently destroyed in an air raid.  Which, of course, is simultaneously unfortunate for the skeptics and convenient for the true believers.  And it leaves the Association for the Study of the Takenouchi Documents free to say any damn thing they want to about them.

But there's more to it than just some probably spurious documents, and the tale seems to predate Takenouchi's "discovery."  What's more interesting is that not only do the people in Shingō mostly seem to accept the story as true, they participate in some curious rituals -- such as marking newborns' foreheads with black crosses, and sewing "Star of David-like patterns onto babies' clothing."  All, if you believe the tale, a cultural memory from 2,000 years ago.

Even so, I'm not buying it.  Cultural contamination, whether deliberate or unwitting, is simply too easy to do (consider two examples I've looked at here at Skeptophilia -- the cult of John Frum and the Sirius B story from the Dogon).  Which is more likely -- that Jesus Christ made three trips to and from Japan, on foot, or that in the late 19th or early 20th century some Christian guy from the West ended up in Shingō and got the whole crazy tale started?

In any case, it's made for a considerable tourist attraction. 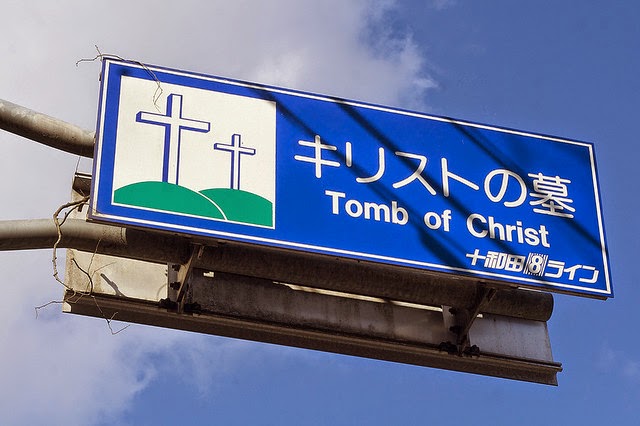 [image courtesy of photographer Jason Hill and the Creative Commons]

So that's our weird claim for the day.  Jesus in Japan, and the crucifixion of Isukiri, Jesus's less-known, and extremely unlucky, brother.  If I'm ever in Japan, I'll make a point of checking it out.  At least it's safer for tourists than visiting Jerusalem, these days.
Posted by Gordon Bonnet at 5:12 AM