I often wonder why humans, as a group, are so uncomfortable remaining in ignorance about something.

It's an inevitable condition if you study anything scientific.  Scientists are always pushing the edges of our knowledge, which means they have to be keenly aware of the fact that there are a lot of questions for which we simply don't have answers.  As astronomer Neil deGrasse Tyson says, "You can't be a scientist if you are uncomfortable with ignorance, because scientists live at the boundary between what is known and what is unknown in the universe. .. Scientists are always 'back at the drawing board.'  If you're not 'back at the drawing board,' you're not making discoveries.  You're not doing science.  You're doing something else."

The fact remains, however, that a lot of us don't like there to be gaps in our knowledge.  And this gives rise to the tendency to fill in those gaps with pseudoscience -- with nonsense "explanations" that give a mystical twist to the places science hasn't yet been able to elucidate.

As an example, consider the pineal gland.

I still recall finding out about the pineal gland when I was in high school biology class in the tenth grade.  We were going through the endocrine system, and our teacher, Ms. Miller, said, "There's this structure in the middle of your head called the pineal gland.  It's pretty peculiar -- everyone has one, but we have no idea what it does."  This, of course, piqued my curiosity.  How could there be a structure in our own bodies that no one could explain? 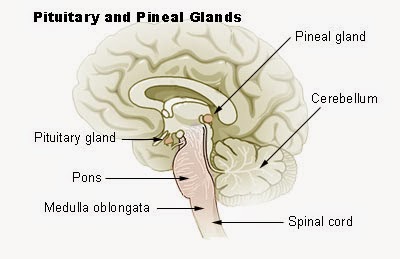 In the intervening thirty-odd years, we've progressed some, but there's still a lot we don't know about this little organ.  In the journal Neuroendocrinology, physiologists M. M. Macchi and J. N. Bruce are up front about this:


Descriptions of the pineal gland date back to antiquity, but its functions in humans are still poorly understood.  In both diurnal and nocturnal vertebrates, its main product, the hormone melatonin, is synthesized and released in rhythmic fashion, during the dark portion of the day-night cycle.  Melatonin production is controlled by an endogenous circadian timing system and is also suppressed by light.  In lower vertebrates, the pineal gland is photosensitive, and is the site of a self-sustaining circadian clock. In mammals, including humans, the gland has lost direct photosensitivity, but responds to light via a multi synaptic pathway...  Although humans are not considered photoperiodic, the occurrence of seasonal affective disorder (SAD) and its successful treatment with light suggest that they have retained some photoperiodic responsiveness.  In humans, exogenous melatonin has a soporific effect, but only when administered during the day or early evening, when endogenous levels are low...  A role for the pineal in human reproduction was initially hypothesized on the basis of clinical observations on the effects of pineal tumors on sexual development...  A rapidly expanding literature attests to the involvement of melatonin in immune function, with high levels promoting and low levels suppressing a number of immune system parameters.

Put simply; the pineal gland has roles in the sleep cycle, reproduction, and the immune system, but it is far from clear how it all works.

But these gaps in our understanding just cry out for someone to come and fill them with nonsense.  Which, unfortunately, is what has happened.  If you do a Google search for "pineal gland mysticism," you'll get thousands of hits, and have access to more absurd pseudoscience than you could get through in a year.  To look at only a single example, "10 Questions About the Pineal Gland That Add to the Mystery of Spirituality," from the site Truth Theory, we have the following crazy meanderings:


The pine cone shaped, pea-sized pineal gland, located in the center of the human brain, is an organ of tremendous interest these days. To many spiritual seekers it is the ‘seat of the soul‘ and the ‘third eye,’ the anatomical part of the human body that acts as our spiritual antennae, connecting us to the non-physical, spiritual planes of existence.

Right.  Because those "non-physical, spiritual planes of existence" have themselves been shown to exist.

Then, we have a list of questions we're supposed to consider.  These are only "questions" by virtue of ending with a question mark; they're intended to lead us to belief in the woo-woo claptrap that these people are peddling, and simultaneously to ignore whatever the actual scientific research says.  To wit:


Is the pineal gland the evolutionary remnant of a literal third mammalian eye that moved into the center of the brain and changed functions from gathering light to entraining rhythms in accordance with information gathered by the retina?

No, sorry.  No vertebrate has three eyes.  Next question.


Is there a connection between the spiritual promise of the pineal gland, which is shaped like a pine cone, and the Pigna, the colossal bronze pine cone statue of ancient Rome which now sits in a courtyard in the Vatican?

Yes.  It is the same connection between kidneys and kidney beans, i.e., they are shaped kind of alike.  The fact that there's a statue of a pine cone at the Vatican is weird, but irrelevant.  Nota bene: The Pope and the Dalai Lama both have a pineal gland.  So, presumably, did Mother Teresa, Confucius, Lao Tse, Jesus, Mohammed, and L. Ron Hubbard.  But given that so does Kim Kardashian, I'm guessing that this doesn't mean much, enlightenment-wise.


Why is the pineal gland the only organ in the human body that calcifies and solidifies with age?... Why is it that following the methods of pineal gland decalcification and cleansing often bring genuine results to people who are seeking heightened spiritual experience, and why do these practices often result in people being able to more easily remember dreams and lead them to feel more connected to ‘source?’

Well, first of all, your pineal gland is not the only structure in your bodies that calcifies with age.  Your cartilage does the same thing (well, some of it does); the process in the skeletal system is called "ossification," and is perfectly natural.  Woo-woos have long claimed that pineal gland calcification is caused by fluoride in tap water and toothpaste, because if you failed high school chemistry, you are apparently allowed to claim that calcium phosphate (the material that is deposited in organs that calcify) is the same thing as fluoride.

Oh, and we're not the only organisms that experience pineal gland calcification.  It's been observed in foxes, rats, and turkeys, and none of them as far as I know brush their teeth (or in the case of turkeys, their beaks).

On the other hand, maybe that's why you so seldom see enlightened turkeys.  I dunno.

And one more thing; pineal gland calcification is almost certainly irreversible, and harmless.  Don't waste your money on quack remedies that are supposed to scrub the crusty deposits from your pineal gland, because they are useless at best (like drinking vinegar) and toxic at worst (such as consuming neem oil, which is used as a pesticide and can cause nausea, vomiting, headaches, and seizures).

Of course, no article like this would be complete without a dig at the people who actually know what they're talking about:


However, to many scientists and rigid materialist thinkers, it is strictly an endocrine gland responsible for the secretion of the hormone melatonin, a substance which, among other things, aids in the regulation of our circadian rhythms.

Oh, those boring rigid materialists!  Always insisting that there be evidence for stuff!

The bottom line is: we still don't know a lot about the pineal gland, but that's no excuse to make shit up.  Let yourself not know something.  Better yet, read some actual scientific papers.  You'll learn stuff, which is cool.  In the long haul, it'll make you less likely to fall for absurd pseudoscientific nonsense of all sorts.  You might even turn into a "rigid materialist," which sounds way scarier than it actually is.
Posted by Gordon Bonnet at 2:56 AM