Someone really should talk to Ken Ham about how to do PR, because in the last year or so, he's really mucked things up.

First, we have the ongoing foolishness surrounding "Ark Encounter," his project to reconstruct Noah's Ark, at the scale of the original (as it were).  Ham is determined to have his employees sign a contract requiring them to espouse a belief in Christian fundamentalism, which is clearly against Kentucky state law given that he's receiving state tax breaks for the project.  The results:

So he's not really accomplishing much but wasting a lot of money and making what amounts to the International Museum of Credulity.

And earlier last year we had his ill-advised attempt to debate Bill Nye on the topic of creationism, which brought to mind the battle between King Arthur and the Black Knight in Monty Python and the Search for the Holy Grail.  I kept expecting Ham to shout, "I'm invincible!" and Nye to respond, "You're a loony."  Apparently even the Christians thought Ham got trounced, with the polls giving Nye the victory by a 9-1 margin. 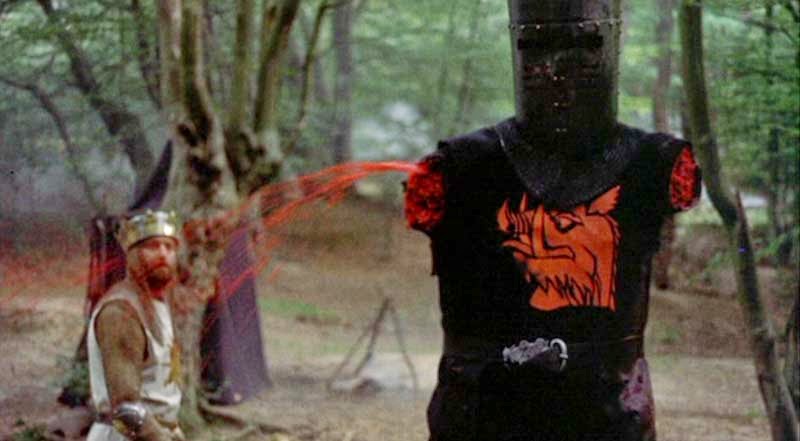 But far be it from Ken Ham to stop there.  He's the kind of guy who reaches rock bottom, and starts to dig.  Ham just wrote, over at his site Answers in Genesis, a post that would make me think he was engaging in an elaborate act of self-parody if I didn't know better.

In this post, he explains that we should stop searching for alien life, because even if it does exist, it's damned anyway.

I'm not making this up.  Ham writes:

The Bible, in sharp contrast to the secular worldview, teaches that earth was specially created, that it is unique and the focus of God’s attention (Isaiah 66:1 and Psalm 115:16). Life did not evolve but was specially created by God, as Genesis clearly teaches. Christians certainly shouldn’t expect alien life to be cropping up across the universe.

So we've started out well, here.  Forget what the silly old scientists say, let's rely on a book written by a bunch of superstitious Bronze Age nomads instead.  What do scientists know, anyway?  They have a "secular worldview," which is code, of course.  It means "wrong."

Then he gets to the meat of the post, to wit:

And I do believe there can’t be other intelligent beings in outer space because of the meaning of the gospel.  You see, the Bible makes it clear that Adam’s sin affected the whole universe.  This means that any aliens would also be affected by Adam’s sin, but because they are not Adam’s descendants, they can’t have salvation.  One day, the whole universe will be judged by fire, and there will be a new heavens and earth.  God’s Son stepped into history to be Jesus Christ, the “Godman,” to be our relative, and to be the perfect sacrifice for sin—the Savior of mankind.

Jesus did not become the “GodKlingon” or the “GodMartian”!  Only descendants of Adam can be saved.

So, let me get this straight.  There can't be aliens, because god wouldn't have created aliens and then allowed them to be damned because of someone else's actions (Adam and Eve eating the apple, etc.), and we know there was no GodKlingon because the bible says so.  But Ken, this raises a rather awkward question: isn't that actually what you're saying god is doing right here on Earth?  Adam and Eve ate the apple, and that results in everyone on Earth being damned for eternity?

I didn't eat the apple, for criminy's sake.  I don't even like apples.

So the whole thing boils down to humanity being damned because of one action by our alleged distant ancestors.  Unless, apparently, you accept that our sins are forgiven, because god sacrificed himself to himself to save us from himself.  Or something like that.

Ham then ends with a bang:

We need to start proclaiming the authority of God’s Word from the very first verse—even on the subject of alien life!

To boldly pray where no one has prayed before!

This latest salvo seems to elevate Ham from "buffoon" to "laughingstock."  I just cannot fathom how anyone, even the devout, can take this guy seriously any more.  He's done a big favor for us atheists, however; he's demonstrated that you can't accept biblical literalism without engaging in amazing amounts of pretzel logic, and ignoring not only cosmology, geology, and evolutionary biology, but practical considerations such as who the sons of Adam and Eve married, and how Noah got kangaroos back to Australia after the flood receded, not to mention where all the water went.

Myself, I would love it if intelligent alien life were discovered.  It's been a hope of mine ever since I was old enough to consider the question.  And now I have yet another reason to be excited about the work being done at SETI.  For one thing, it'd be fun to see Ken Ham have to eat his words.  For another, it'd be fun to have some aliens to keep me company down in hell.

Unless they're Vogons.  Their poetry really sucks.  To have to listen to that for all eternity would certainly be right up there with being Thrown Into The Fiery Furnace, enjoyment-wise.
Posted by Gordon Bonnet at 3:02 AM