Why is it that the people trying to "fix the education system" seem hell-bent on making it worse?

It's a mysterious phenomenon.  There is now a mountain of evidence that (for example) standardized test scores are unreliable measures of both student progress and teacher competence, and yet we are increasingly using exactly those metrics for gauging both.  In my home state of New York, 20% of my "final grade" as a teacher is mandated to come from high-stakes standardized tests (in my case, the Living Environment Regents Exam, which may be the most poorly-constructed exam I've ever seen).

So given that we've had incontrovertible evidence that it's a bad idea to put the futures of our students and the careers of our teachers in the hands of the corporations who are paid big bucks to write ineffective standardized tests, what do you think would make sense, as a next step?

If you went for option #2, all I can say is, you understand the system of educational oversight all too well.  This latest idiotic idea was proposed by New York Chancellor of Schools Merryl Tisch, who wants test scores to trump everything else, including the evaluations of teachers done by competent school administrators.

In Tisch's own words, she proposes to:

... (e)liminate the locally selected measures subcomponent, established through local collective bargaining. The data reveal that the locally-negotiated process for assigning points and setting targets in this subcomponent do not differentiate performance in terms of the composite ratings that teachers and principals receive. Instead, assign 40 percentage points to student growth on State assessments and other comparable measures of student growth – including performance-based assessments.

And what is her rationale for proposing this?  It is, she says, because too many teachers were rated as competent by the previous metric.  The number rated "ineffective," Tisch said, was simply too low.  In other words: if the metric says that most teachers are doing their jobs, then the metric has to be inaccurate.

She also proposes monetary incentives for "high-performing teachers" and "teachers taking leadership roles," thus pitting one teacher against another in terms of who gets the highest-performing classes.

Let me take my own situation as an example.  This year, I am teaching only one section of Regents Biology (which I steadfastly refuse to call "Living Environment," largely because the last "paradigm shift" we had in New York State was called "Raising the Bar," and they "raised the bar" in my course by renaming it, which was considered raising the bar because "Living Environment" has more letters than "Biology" does).  In our school, primarily because of staffing and financial issues, we have gone to a model of dealing with special-needs students called "co-teaching."  Co-teaching allows the district to put virtually all of the "classified" (i.e. special education) students together in one class, and then to assign a special education co-teacher to be in the classroom with the subject-area teacher.

This year, I got the "co-taught" class.  Half of my 24 students are "classified."  In this class, I have students who read on the fifth grade level.  I have students who have behavioral disabilities.  I have an autistic child who shuts down whenever things get stressful, which averages four days out of five.  I have ten students who have yet to pass a single quiz this year, despite extra help from myself and the co-teacher, and "modifications" (i.e., quizzes that have been adjusted to be easier to pass).

This is one of the classes on which I will be evaluated this year.  What do you think my chance of being rated "effective" is going to be?  If there was a monetary incentive this year, I'd be unwise to make advanced plans for spending it.

Don't get me wrong.  I love the kids in that class.  They are, by and large, sweet, cooperative, funny, and earnest.  My co-teacher is a wonderful educator, and we have a great working relationship.  But to call the two of us incompetent because we can't get this group of kids to pass the state assessment is to ignore the reality that we cannot treat teachers like factory workers, and kids like widgets that have to be made to a particular specification.

The ironic piece of all of this is how completely obvious this is to anyone who has spent any time in a public school, and how mysterious it all seems to the people in charge.  Merryl Tisch, for example, has in her career spent only seven years teaching children -- and these were years spent in wealthy private schools.  I would humbly suggest that perhaps, wild idea though it may be, we should have the people in charge of public education be individuals who have devoted their lives to teaching children, of all sorts of backgrounds, in public schools.

I would also humbly suggest that Ms. Tisch doesn't know what the hell she's doing.  Nor did our former Commissioner, John King, who oversaw both the APPR (Annual Professional Performance Review) and Common Core implementation disasters that have taken place in New York over the last couple of years.  But since in government, you can't screw something up badly enough to stop you from getting promoted, King is now going to work as a top assistant to U. S. Education Secretary Arne Duncan. 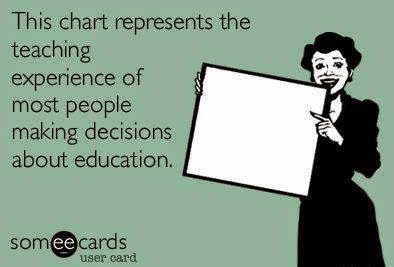 How have we gotten here, to treating teachers like untrustworthy assembly-line workers, and children like little cookie-cutter images?  It doesn't take being a teacher to see how absurd the latter is; anyone who has children of their own knows that they develop at different rates, excel at different things, have different problems, different stumbling blocks.  The idea that anyone could take a random group of tenth graders (for example), and get them to the same place at the same time, is moronic.

And the idea that if the kids aren't all at the same place at the same time by the end of the year, it's the teacher's fault, is somewhere beyond moronic, in that ethereal realm that there really isn't a word in the English language to describe.

I think the answer about how we got here is twofold.  First, people want a uniform product.  That 1950s-mentality, construction-line model is sunk deep into the American psyche.  And if we can't achieve it, we naturally look around for scapegoats.  Teachers are convenient in that regard, aren't they?

The second reason, though, is more pernicious, and it is, to state it bluntly, the almighty dollar.  It's financially expedient to blame the teachers, turn everything into numbers, and act as if those numbers mean something real.  By doing so, you (1) pretend that the problem is fixable without actually changing anything substantive; (2) frustrate the absolute hell out of experienced teachers, who then get out of the profession, saving districts money; (3) avoid considering solutions that might truly work, like reducing class sizes, creating classrooms with differentiated instruction to better meet the needs of children with different abilities and challenges, and allowing schools to beef up programs that encourage creativity, such as music and art.

Nope.  That's not the way, say policy wonks like Tisch.  Test the little buggers to a fare-thee-well, because that somehow will tell you what is really going on, both with the kids and with the teachers who are trying their best to teach them, despite larger classes, less funding, and more absurd busy-work from state agencies.  Reduce funding via state taxes, and simultaneously put a cap on local levies, thus forcing school boards into the Hobson's choice of cutting virtually the only thing they have control over, which is staffing.  (And guess what goes first?  The aforementioned "non-core" subjects like art and music.)

But the wonks keep rising to the top, and the teachers keep saying this sort of thing, and keep getting ignored.  To pay attention to us would be to admit that we're on the wrong course, and have been on the wrong course for some time.  Which would mean that our educational leaders have achieved a score of...

Of course, right.
Posted by Gordon Bonnet at 2:00 AM