The naked and the dead

There's a general rule that there is no belief so bizarre that people can't alter it to make it even weirder.  And a corollary of that is that when they do, it's often motivated by profit.

You're probably aware of all of the various ghost-hunting "reality" shows that have cropped up in the last few years.  I use the word "reality" advisedly, and only in the sense that the people doing the ghost hunting actually exist.  But given that these shows are now becoming a little clichéd, producers are casting around to try to find a concept to spice up the old chasing-after-troubled-spirits trope.

And they found one.  There's going to be a series wherein the ghost hunters pursue their quarry...

I'm not making this up.  It's called Naked and Afraid, and the idea is that somehow spirits will be more likely to show up if the people hunting them are "vulnerable."  Says casting agent Chrissy Glickman:


This show is not about putting a bad light, causing drama or making fun of the paranormal.  This idea was brought to our company after research on paranormal investigation teams in history doing it in the nude and we want to see if their reasoning for doing it in the nude really does get spirits to communicate easier.

Righty-o.  There's no part of this that has anything to do with attracting viewers because the people on the screen aren't wearing clothes, and because (face it) most folks like looking at naked people.  This is all about scientifically-sound research about the paranormal. 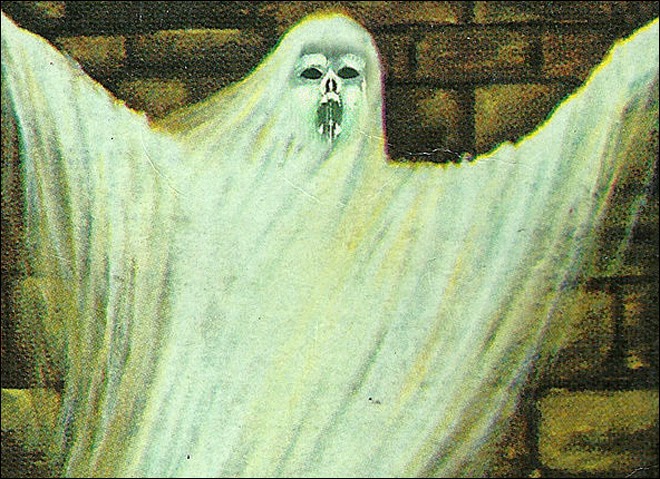 What if the ghost is clothed, and the investigators aren't?  How awkward would that be?  [image courtesy of the Wikimedia Commons]

Adding another amusing filigree to all of this is the response from the community of paranormal investigators.  They object to the whole idea, they say.  It's exploitative, salacious, and only about making money.  Which objections, of course, could be applied to 80% of the content currently on television.

But they're not going to take this lying down.  A group called "Professional Paranormal Investigators" has started an online petition to stop Naked and Afraid from airing.  The petition, which I post here with spelling and grammar verbatim, states:


Please help us to put a Stop to a new Paranormal Series that is set to be aired on a Major Cable Network by a LA based Production Company called Matador. The cast members would be doing the show in the Nude! There theory behind this is to see if a person would be more vulnerable to the spirit world if they are not wearing any clothing at all. All serious Paranormal Investigators know that regardless if you are wearing clothing or not the spirits will still communicate with you if they should decide to do so and it does not make you any more vulnerable than you already are if you are not wearing clothing. This production company is making a Mockery of Ghost Hunting! This in no way will benefit the paranormal community and it will not change peoples views of the seriousness and dedication that is put into this field by Professional Paranormal Investigators. Please help us to stop this from being aired by signing this petition and circulating this to as many people as possible the more signatures we get The Louder and Stronger Our Voices Will Become!!

So there you are, then.

I'm not sure how I feel about all of this, frankly.  My general opinion is that ghost hunting is pointless, given that there's been zero success thus far (in terms of scientifically admissible evidence, in any case; there are lots of anecdotal reports of communication).  I'm perfectly okay with someone having a pointless hobby, however, even if it's also a little odd; and in that regards, ghost hunting has an advantage over (for example) stamp collecting in that it at least gets you out of the house.  I also have no issues with people running around naked, although it's inadvisable at the moment where I live.  Running around naked in upstate New York in January is just asking to freeze off body parts that most of us are fairly attached to.

In any case, Naked and Afraid will almost certainly turn out to be one of those short-lived series that everyone has forgotten about in six months.  Because once you see episode one, what more can happen?  "Episode twelve: more naked people, and still no ghosts."

So my guess is that the whole thing, even if the petition fails, will turn out to be an, um, flash in the pan.
Posted by Gordon Bonnet at 2:51 AM