The right to criticize lunacy

At what point are you allowed to say, "That may be your religion, but it's completely insane," without being accused of crossing the lines of propriety?

Okay, I admit that it's not nice to do something deliberately that upsets people, but other than that, why should we place religious faith outside of the reach of criticism?  What if the "faith of others" is completely absurd?

For example, consider a story that appeared a couple of days ago in The Times of Israel, which describes a reporter who traveled in Algeria, asking people who they thought were responsible for the Charlie Hebdo massacre.  And apparently the response she got was:

The attacks were done by shape-shifting Jews. 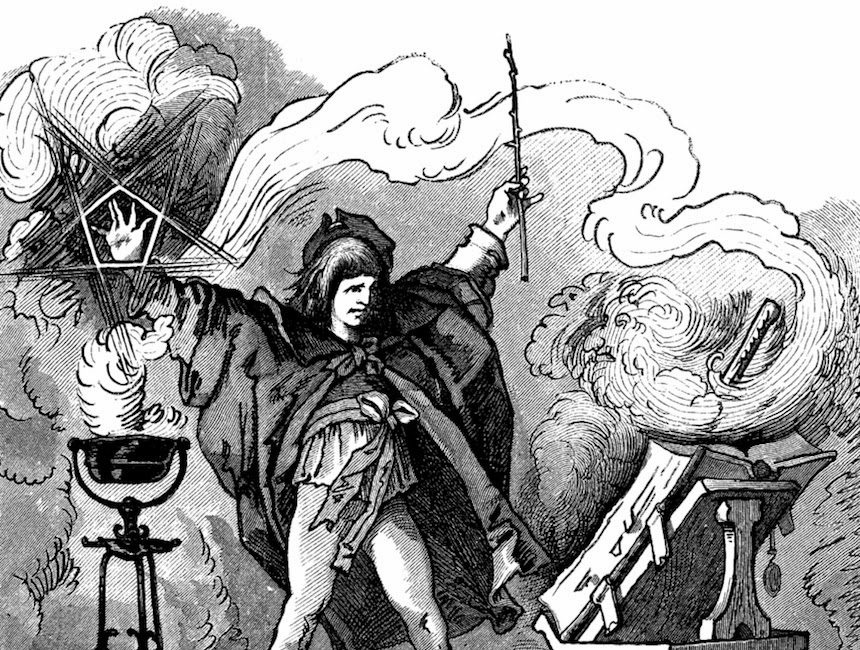 Illustration from Goethe's Werke (1882) [image courtesy of the Wikimedia Commons]

"Many Muslims in north Africa," Dana Kennedy said, "are of the opinion that Jews staged the series of terror incidents to make Muslims look bad... (and) that they weren’t just regular Jews that were doing this, but in fact but a race of magical shape-shifting Jews that were master manipulators that could be everywhere at the same time."

Oh, those wily, wily Jews.  Creating such convincing personae as Cherif and Said Kouachi (the gunmen responsible for the Charlie Hebdo attack, who shouted "Muhammad is avenged" after killing the twelve staff members) and Amedy Coulibaly (the self-proclaimed member of Islamic Jihad who killed a policewoman and four civilians in separate attacks, and who deliberately targeted Jews).

And their response to all of this is that the attacks were by Jews impersonating Muslim terrorists?  What, are the Jews also the ones who are beheading people in Syria right now?  Is it Jews who are responsible for flogging, hanging, or beheading people in public because they've been found guilty by a criminal justice system that would have seemed unfair to Tomás de Torquemada?

I dunno.  It seems to me as if the Muslims are making themselves look bad enough without any outside assistance, from the Jews or anyone else.

And to Pope Francis I would say: if you are not allowed to criticize ideas freely, then how are you supposed to combat ideas that are batshit insane?  Is anyone allowed to claim anything, free of repercussions, because it's under the aegis of faith?  How can he not see that treating "It's my religion" as a Get-Out-Of-Jail-Free card is tantamount to giving license to lunacy of all kinds?

So while Pope Francis has certainly met with my approval over some of his statements, that encourage dialogue and ecumenism rather than rancor and recrimination, I think this one is ridiculous.  We have to be able to point out the absurdity of beliefs.  Without that freedom, there is no filter for telling fact from fiction, reasonable claims from insanity.

I know I've said it before, but it's important enough that I'll reiterate: I'm all for treating people with compassion.  We all come to understanding by different roads and at different speeds, and most of us are striving to figure things out in whatever way we can.  But there is no such requirement that we treat beliefs as if they could have their feelings hurt by criticism.  Beliefs stand and fall by the same criteria as any other sort of claim; by their agreement with facts and evidence.  Without that standard for acceptance, you are adrift in a sea of wild conjecture, without a touchstone for reality.
Posted by Gordon Bonnet at 2:48 AM