Following hard on the heels of yesterday's post, about some Muslims in Algeria who claim that attacks by purported Islamic terrorists are actually being carried about by magical shape-shifting Jews, we have a second, competing claim, from over at the site Bibliotecapleyades:

Islam itself is a hoax, and Muhammad and the Qu'ran and the rest of it were inventions of some evil Jesuits in the Vatican.

I would like to tell you that this is a spoof site, but I'm 99% sure it isn't.  Here's how they begin their argument, if I can dignify it by that name:


A Jesuit cardinal named Augustine Bea showed [Alberto Rivera, a Jesuit priest working in the Vatican] how desperately the Roman Catholics wanted Jerusalem at the end of the third century. Because of its religious history and its strategic location, the Holy City was considered a priceless treasure.

A scheme had to be developed to make Jerusalem a Roman Catholic city. The great untapped source of manpower that could do this job was the children of Ishmael.

The poor Arabs fell victim to one of the most clever plans ever devised by the Powers of Darkness.

Augustine Bea, by the way, is quite real, and was a scholar in biblical archaeology as well as being a powerful Vatican insider (he was, for a time, confessor to Pope Pius XII).  But his biographical details mention nothing about his being part of a grand Muslim hoax conspiracy.  Not that they would, of course.  Because these things have to be kept top-secret, you know, so secret that no one would ever find out about them unless they Googled "Cardinal Bea Muslim hoax." 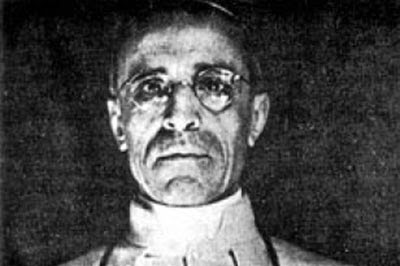 They go on to say:


Early Christians went everywhere with the gospel, setting up small churches, but they met heavy opposition.

Both the Jews and the Roman government persecuted the believers in Christ to stop their spread.

But the Jews rebelled against Rome, and in 70 A.D. Roman armies under General Titus smashed Jerusalem and destroyed the great Jewish temple which was the heart of Jewish worship - in fulfillment of Christ's prophecy in Matthew 24:2.

On this holy place, where the temple once stood, the Dome of the Rock Mosque stands today as Islam's second most holy place.

Sweeping changes were in the wind. Corruption, apathy, greed, cruelty, perversion, and rebellion were eating at the Roman Empire, and it was ready to collapse. The persecution against Christians was useless, as they continued to lay down their lives for the gospel of Christ.

The only way Satan could stop this thrust was to create a counterfeit "Christian" religion to destroy the work of God.

If this is true, Satan sure is a procrastinator, because between the destruction of the Temple and the founding of Islam was a little over 500 years.  You'd think that being the Prince of Darkness and Super-Evil Bad Guy and all, he'd have gotten right on that.

So anyhow, there are all sorts of writings, the author says, that show that Muhammad was basically a no-count Arab trader, and that the Muslim conquest of the Middle East was encouraged by the pope.  Why?  Who knows?


When Cardinal Bea shared this information with us in the Vatican, he said: "These writings are guarded because they contain information that links the Vatican to the creation of Islam."

Both sides have so much information on each other that, if exposed, it could create such a scandal that it would be a disaster for both religions.

In their "holy" book, the Koran, Christ is regarded as only a prophet. If the pope was his representative on Earth, then he also must be a prophet of God. This caused the followers of Muhammad to fear and respect the pope as another "holy man".

The pope moved quickly and issued bulls granting the Arab generals permission to invade and conquer the nations of North Africa.

From what I've read, the Arab generals didn't give a rat's ass what the pope did.  The pope granting them permission to conquer North Africa would be a little like a guy whose house is burning down saying, "Okay, okay, if you insist.  Go ahead, I give you permission to burn."

Anyhow, what earthly purpose would the Catholics have to conspire with the Muslims?  Apparently, it was to stop the missionary work of true Christians:

Cardinal Bea told us in Vatican briefings that both the Muslims and Roman Catholics agreed to block and destroy the efforts of their common enemy: Bible-believing Christian missionaries.

My question, non-historian that I am, is: what Christian missionaries were around back then besides the Catholics?  Okay, there were various weird sects, Arians, Monophysites, Docetists, Ebionites, and a whole bunch of others whose names escape me at the moment.  But they were mostly small and not very influential, and got the crap smote out of them at every turn by the Catholics for being heretics.  The point of this article, honestly, seems to be that American bible-toting Christian fundamentalist missionaries were being persecuted in the 7th century.

If you thought that a jump of 500 years between cause and effect was a lot, now we jump 1,300 years, all the way to the early 20th century.   Apparently, during the intervening years, Satan and the Vatican et al. must have been taking a long siesta.  But once the year 1910 rolled around, they were mad as hell and weren't gonna sit around and take it any more:


The next plan was to control Islam. In 1910, Portugal was going Socialistic. Red flags were appearing and the Catholic Church was facing a major problem. Increasing numbers were against the Church.

The Jesuits wanted Russia involved, and the location of this vision at Fatima could play a key part in pulling Islam to the Mother Church. In 1917, the Virgin appeared in Fatima. "The Mother of God" was a smashing success, playing to overflow crowds. As a result, the Socialists of Portugal suffered a major defeat.

Roman Catholics worldwide began praying for the conversion of Russia, and the Jesuits invented the novenas to Fatima, which they could perform throughout North Africa, spreading good public relations to the Muslim world.

The Arabs thought they were honoring the daughter of Muhammad, which is what the Jesuits wanted them to believe.

As a result of the vision of Fatima, Pope Pius XII ordered his Nazi army to crush Russia and the Orthodox religion, and make Russia Roman Catholic. A few years after he lost World War II, Pope Pius XII startled the world with his phony "dancing Sun" vision to keep Fatima in the news. It was great religious show biz and the world swallowed it.

Not surprisingly, Pope Pius was the only one to see this vision.

Because isn't that the way visions work?  If lots of people see something, it's not called a "vision," it's called "reality."

So anyway, there you have it.  The Vatican of the 7th century didn't like the depravity in Rome in the 1st century, so they invented Islam so as to stop Portugal from becoming socialist in the 20th century, resulting in Pope Pius XII sending the Nazis to conquer Russia.

Makes perfect sense.  All we need is to add some magical shape-shifting Jews, and we'll have all of the batshit insane bases covered.