Some days, being an optimist is a losing proposition.

In previous posts, I have outlined the evidence supporting the claim that hydrofracking is (1) extremely wasteful of water, (2) dangerous, (3) likely to result in contaminated groundwater, and (4) contributing to climate change.  Any one of these reasons should be sufficient to prohibit it, but pushed by corporate interests, fracking is going great guns despite multiple mishaps (some of them resulting in loss of life) and most recently, the discovery of fracking chemicals in drinking water in Pennsylvania.  (For a summary of the dangers of fracking, with specific examples, see my post from last December.)

So it's not to be wondered at that some communities have taken matters into their own hands, and outlawed fracking.  And for people who claim that this is just the NIMBY principle at work ("Not In My Back Yard") -- I would argue that this technology shouldn't be in anyone's back yard. 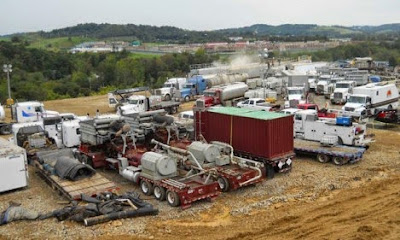 That's what the citizens of Denton, Texas did last year -- they voted in November to join a growing list of towns that have banned fracking within their boundaries.  But this week the state of Texas overrode that vote, by passing a resolution 24-7 that prevents communities from banning anything done by oil and gas companies.  The resolution is going to Governor Greg Abbott this week, who is expected to sign it into law.

"Oil and gas companies donated $5.5 million to the campaigns of legislators in the last elections," said Luke Metzger, director of Environment Texas.  "And clearly they got their money’s worth."

Supporters of the bill were, of course, elated, as were the oil and gas corporations.  Troy Fraser (R-Horseshoe Bay) said that the bill found "the common ground" between the energy industry and municipalities, which is true in the sense of a rabbit finding "common ground" with a wolf when it gets pinned to the ground and eaten.

"House Bill 40 enjoys widespread support because the legislation provides cities with authority to reasonably regulate surface level oil and gas activities, while affirming that regulation of oil and gas operations like fracking and production is under the exclusive jurisdiction of the state," said Todd Staples, president of the Texas Oil and Gas Association.  Which is mighty convenient, given that most of what the petroleum industry does is underground.


Read more here: http://www.star-telegram.com/news/business/barnett-shale/article20199849.html#storylink=cpy
Among the many things that appall me about this is the hypocrisy of the legislators who voted for the bill.  The yes votes come from a Senate that is 2/3 Republican, and the vote went largely along party lines. But isn't the Republican ideal that small government is the best?  Don't we always hear the quote from conservatives, sometimes attributed to Thomas Jefferson, that "the government that governs best is the one that governs least?"

Apparently this maxim only applies if you're talking about taxes and gun control, and not about communities exercising self-determination with regard to greedy corporations pushing their way in and ruining aquifers used for agriculture and drinking water.

Oh, and preventing public school biology teachers from teaching evolution, and limiting the rights of LGBT people to enjoy the same privileges we straight people take for granted.  Perfectly okay for the government to be huge and intrusive with regards to those issues.

But if a community decides -- by a popular vote, no less -- that it doesn't want fracking wells on its land, then the state of Texas steps in and says, "Sorry.  You can't do that."

Small government, my ass.  Apparently in Texas, the Republican rule has been changed to "Small government unless it's doing something that gets me votes or lines my wallet."

The whole thing reeks of corruption.  Metzger called it right; money talked, the hypocrites voted, and the corporations won.  And the citizens of towns like Denton lost, big time.  One can only hope that they'll challenge this ruling, and take that challenge as far as it can go.

And I also hope that whatever legal obstacles they set up are put in place quickly -- before the frackers come in and trash the place.
Posted by Gordon Bonnet at 2:46 AM