In 1633, Galileo Galilei was put on trial by the Inquisition in Rome for his claim that the Earth went around the Sun, not the other way around.

He had a nice body of evidence in his favor.  He had observed the phases of the planet Venus, had advanced a theory of oceanic tides that supported the movement of the Earth rather than the Sun, and had actually seen the four largest moons of Jupiter (now called the "Galilean moons" in his honor) circling their host planet.  He was able to show that all of the motions of the planets, as well as the apparent motions of the stars, were far more easily and simply explained by a heliocentric model than a geocentric one.

None of that mattered.  The powers-that-be had spoken, and religious dogma and orthodoxy won the day.  Galileo was found guilty of being "gravely suspect of heresy," and was put under house arrest for the remaining nine years of his life.  He was fortunate; only thirty years earlier, Giordano Bruno was burned at the stake for such heretical views.

Part of what saved Galileo, of course, was that he was bullied into recanting.  He was made to swear his adherence to the scriptural account, and to "abjure, curse, and detest" his criticism of the claim that the Earth was the motionless center of the universe.  His caving to their demands probably saved his life.  But legend has it that as he left the courtroom to begin serving his sentence, he muttered, "Eppur si muove"  -- "and yet, it moves." 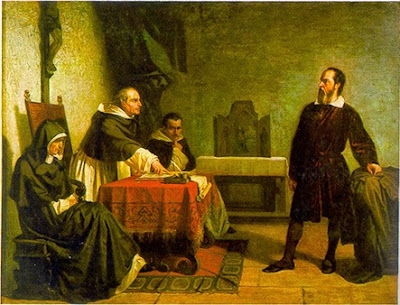 And that brings me to our modern-day version of the Inquisition, by which I mean the climate change deniers currently in charge of the House Committee on Space, Science, and Technology, chaired by Representative Lamar Smith of Texas, and containing such shining lights of scientific knowledge as Dana Rohrbacher (who called climate change "liberal claptrap").  The general tenor of the committee can best be judged by a statement from Representative Bill Posey of Florida, who claimed we shouldn't be worried, because during the "Age of the Dinosaurs" the temperature was 30° warmer than it is now, and it didn't seem to bother them any.  But cut the guy some slack; even if he apparently doesn't know that the dinosaurs were around for 200 million years, and that there's good geological evidence of temperature swings during that time that included at least one Ice Age, he's correct that there was a temperature high -- called the Cretaceous Thermal Maximum -- that occurred when there were dinosaurs.  Okay, the average temperature during the Cretaceous Thermal Maximum was only 5° higher than it is today, so he was off by a factor of six, but that's good enough for the Science Committee, right?

So my point is, we've allowed science research to be put into the hands of a committee largely made up of clowns who couldn't pass a 9th grade Earth Science class.  So what did we expect would happen?

What happened was precisely what the Inquisition did to the free-thinking gadflies of its time; they squashed dissent.  Just a couple of days ago came the announcement that the committee had slashed NASA's Earth Science Research budget by $323 million -- about 20% of its total budget.  The cuts weren't even announced until six days before the vote, giving the minority of members who actually get that scientific understanding comes from data and hard evidence little time for action.  The budget passed on a party-line vote.

Chairman Smith, when asked about the budget, responded only that "The Obama administration has consistently cut funding for... human space exploration programs, while increasing funding for the Earth Science Division by more than 63 percent."

But you see, Mr. Chairman, there's a good reason for that.  The scientific consensus is that we're approaching a tipping point with respect to the climate, despite what you and your cadre, and its counterpart in the Senate -- the Committee on the Environment, chaired by none other than Senator James "Snowball" Inhofe -- would have us believe.  Some people, including biologist and environmental scientist Tim Flannery, think we might already have passed that point.  (His book The Weather Makers is one of the best, most readable summaries of the mountain of evidence in favor of anthropogenic climate change; everyone should read it, but plan to be a little depressed afterwards.)

So we've put the foxes in charge of the henhouse, and we shouldn't be surprised that they are making chicken dinners.  NASA was given the message "toe the line, or else."  They basically said, "Up yours, Lamar," and continued to push for action on climate change, giving unequivocal support to the scientists who conduct the research and actually know what's going on.  The result?  NASA's budget for climate research gets cut to the bone -- and the House passed a bill that prohibits scientists from giving advice on their own research to the Environmental Protection Agency, while allowing corporate interests unfettered access to the EPA's advisory board.

But sooner or later, the Congress will find out what the Inquisition found out: you can't legislate away reality.  If they wanted to, they could pass a bill stating that the Moon was made of Wensleydale cheese, and it wouldn't make a damn bit of difference to its actual composition.  So while our leaders put their hands over their eyes and say "la-la-la-la-la, not listening," outside the world continues to warm, the climate continues to oscillate wildly, storms continue to strengthen, and the seas continue to rise.

Chairman Smith and his herd of science-deniers can vote away our ability to study climate change, but they can't make the warming itself go away.  All they can do is assure that we have less information, and will be less able to cope with the effects of climate change when they happen.

Eppur si muove.
Posted by Gordon Bonnet at 2:52 AM