One of the topics we discuss in my Critical Thinking class is when taking a stand on an ethical issue trumps law.

Civil disobedience, in other words, crossing the line into potential arrest and prosecution.

I ask this question because two days ago, I was arrested for being part of a blockade of Crestwood Midstream's natural gas and (proposed) liquefied petroleum gas storage facility alongside Seneca Lake.  As I have described in previous posts, the facility uses geologically unstable salt caverns for this storage, risking catastrophic failure that would result in environmental devastation of the region and almost certainly loss of life.  The plan is, to put it simply, reckless and dangerous, driven by the profit motive of an out-of-state corporation that could simply up stakes and move back to Texas if the unthinkable happens.

We, on the other hand, live here and would have to deal with the consequences. 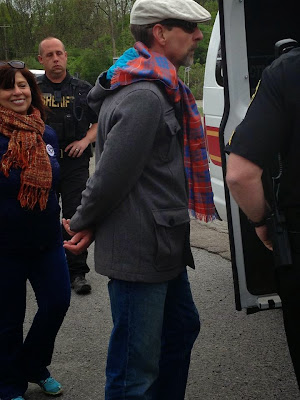 The fact that Crestwood's plan is wildly irresponsible is not just fanciful or alarmist.  Dr. Robert Howarth, professor of ecology and environmental biology at Cornell University, had the following cautionary words:


The stakes are high.  Industry and government march blithely ahead, ignoring the growing risks of extreme energy development: deep offshore oil and gas, Arctic oil and gas, tar sands, shale gas… and the risky storage of methane and propane proposed for the salt caverns below us here.  We hit 400 ppm carbon dioxide this winter, for the first time in the past few million years; and another greenhouse gas -- methane -- is also at its highest level in the last several million years.  We are near the point of no return, where a much warmer Earth will be with us for the next several thousand years.

Schneising et al. showed in 2011 that the methane in the atmosphere is largely from shale gas and shale oil drilling.  The methane signature they found from this human activity is so large that it was visible from data obtained from satellites.  And methane has a hundred-fold higher impact on global temperature than carbon dioxide does -- making this enterprise even more foolhardy.

So the impact of what Crestwood is doing here goes far beyond the local damage that a catastrophic mishap would cause.  Simply put, the fossil fuels need to stay in the ground.

And it's not as if there aren't solutions, solutions that could be put in place now if there was the will and the farsightedness to do so.  Howarth writes:


We already have the ability to make the switch to electric vehicles, and electric heat pumps for heating and cooling.  Their efficiencies are far greater than gasoline and diesel driven vehicles, or furnaces and water heaters than run on natural gas or fuel oil.  This would result in a 30% reduction in total use of energy, just from this transformation.  And that electricity should come from renewable sources.  Crestwood is placing our lives and our homes at risk, and moving us closer to global ecological disaster, because of a determination to keep using an energy source that should have been phased out decades ago.

Switching to energy primarily from wind and from solar has a lower cost today than using fossil fuels, if the health costs of fossil fuels are considered.  In NY, there are 4,000 deaths each year from air pollution caused by fossil fuels, at a cost of $33 billion per year.

Making entire state free of fossil fuels costs $570 Billion. The cost savings from reduced illness and death from fossil fuels over the next fifteen years is enough to pay for the entire cost of the transition to renewables.

The "natural gas is about jobs" argument is equally specious.  Crestwood's projection of the number of jobs created for locals is outweighed fivefold by the jobs available in renewable energy in our region.  Joe Sliker, president of Renovus Solar Energy, said:


The solar industry complements the existing, thriving, and growing winery and tourism industries.  Solar is cleaner, safer, and a more prosperous path forth for families and even for all of the Crestwood employees.

So, I'm here today for all of the good men and women who risk their lives every single day for their jobs.  I'm here for the welders, the pipe fitters, the electricians, the truckers, and all of the hard working people who go to work every day to provide for their families.  I'm here for those people who lay their lives on the line every morning when they wake up, for those people whose hands bleed while they work, and for the families that love and worry about them.

I'm here to offer them a choice.  I'm here to tell them that we don't have to support a dangerous facility and risk our lives and the lives of our loved ones in order to have good paying jobs.

I'm here to offer all of those people a better job.  Today.  Right now.  Our Renovus HR manager is here with a stack of applications.  Come talk to us.

Solar is rapidly expanding and Renovus is a thriving regional business. In contrast to the eight to ten permanent jobs promised by the gas storage facility, Renovus has added over 50 new permanent jobs just in the past year.

Add it all up.  Crestwood Midstream, and other companies like them, put the lives and livelihood of ordinary people at risk for one reason; to boost their profits and pay their stockholders.  The alternatives are real and affordable and viable.  What is being proposed amounts to reckless endangerment, yet our local and state governments refuse to step in and stop it.

So it was time for me to act.

I know that my arrest, by itself, will have little effect.  I'll appear at court, and likely face a fine, and that will be that.  But the symbolism of people who are willing to risk prosecution for a worthy cause has a far greater reach than that; it is the actions of individuals that make the difference.  And that means all of us who know enough to care about what is happening.  As the amazing Australian singer/songwriter Judy Small put it in her song about social activism, "One Voice in the Crowd," "In the end it's all the same; the buck stops where you are."  (Listen to the whole song at the link below.)


So it's not about the futility of a few people standing up to the actions of a huge corporation.  It's about doing the right thing, and as Kenyan environmentalist Wangari Maathai put it, "Keeping our feeling of empowerment ahead of our feeling of despair."  It's about being willing to put yourself at risk, because the alternative is to accept blindly a far worse risk, one whose consequences may still be felt a thousand years from now.

We all need to act, and the time is now.

To support what is happening here, please "like" the We Are Seneca Lake Facebook page, write your congressperson and/or Governor Andrew Cuomo (here's his contact information), and share this post around.  This message needs to move, and quickly.
Posted by Gordon Bonnet at 2:39 AM