Punching yet another hole in our sense that humans are at their core a logical, rational species, filmmaker Errol Morris has done an elegant experiment that shows that our perceptions of the truth value of a statement are influenced...

Morris conspired with The New York Times to run a part of David Deutsch's The Beginning of Infinity that looks at the Earth's likelihood of having its habitability destroyed by an asteroid collision.  (Deutsch's conclusion: not very likely.)  Afterwards, the readers were invited to take a survey entitled, "Are You an Optimist or a Pessimist?" which ostensibly measured the degree of pollyanna-ism in the reader, but was really set up to see to what extent readers bought Deutsch's argument that humanity has no real cause to worry.

The variable was the font that the passage was written in.  He used six: Baskerville, Helvetica, Georgia, Comic Sans, Trebuchet, and Computer Modern. 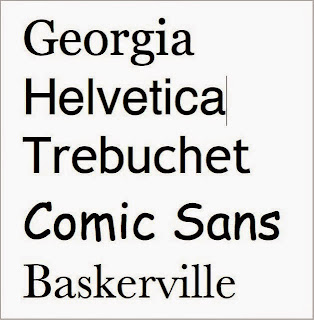 40,000 people responded.  And the results were as fascinating as they were puzzling; Baskerville had a 5-person-out-of-a-thousand edge over the next highest (Helvetica), which may not seem like much, but which statisticians analyzing the experiment have declared is statistically significant.  Cornell University psychologist David Dunning, who helped design the experiment, said:


(The score spread is) small, but it’s about a 1% to 2% difference — 1.5% to be exact, which may seem small but to me is rather large.  You are collecting these data in an uncontrolled environment (who knows, for example just how each person’s computer is rendering each font, how large the font is, is it on an iPad or iPhone, laptop or desktop), are their kids breaking furniture in the background, etc.  So to see any difference is impressive.  Many online marketers would kill for a 2% advantage either in more clicks or more clicks leading to sales.

The whole thing is a little disturbing, frankly -- that our perceptions of the truth are so malleable that they could be influenced by a little thing by what font it's set in.  Morris writes:


Truth is not typeface dependent, but a typeface can subtly influence us to believe that a sentence is true.  Could it swing an election?  Induce us to buy a new dinette set?  Change some of our most deeply held and cherished beliefs?  Indeed, we may be at the mercy of typefaces in ways that we are only dimly beginning to recognize.  An effect — subtle, almost indiscernible, but irrefutably there.

Morris was interviewed about his experiment, and was asked a particularly trenchant question: When people read this for the first time, how do you hope that will change their own perception of the world?  Morris responded:


I'm not really sure. I'm not even sure what exactly to make of the results, in truth.  Everything I do—everything I write about and everything I make movies about—is about the distance between the world and us.  We think the world is just given to us, that there's no slack in the system, but there is.  Everything I do is about the slack of the system: the difference between reality and our perception of reality.  So in the sense that this essay lets us further reflect on the world around us, and even makes us paranoid about the slack in the system, then I think it's a good and valuable thing.

And I certainly agree.  Anything that makes us aware of our own biases, and the faults in our logic and perceptual systems, is all to the good.  We need to realize how inaccurate our minds are, if for no other reason, to reinforce how important science is as a tool for improving our knowledge.  Science, relying as it does on human minds for data analysis and interpretation, is far from perfect itself; but as a protocol for understanding, it's the best thing we've got.  Without it, we have no way to winnow out the truth from our own flawed assumptions.

So watch for more and more articles and advertisements appearing in Baskerville, because you just know that the media is going to jump on this study.  And I hope that this once and for all stops people from using Comic Sans, because I can't see that font without thinking of Garfield, and heaven knows that's not a good thing.