The Shroud of Turin is still an object of reverence for the devout.  Purportedly the burial cloth of Jesus, it shows the front and back of a man who has the injuries one would expect from a crucifixion.  The problem is, there was a peer-reviewed study that appeared in Nature all the way back in 1989 that used cotton fibers from the shroud to establish an age by carbon-14 dating -- and pretty conclusively showed that the cloth was made between 1260 and 1390.  In other words, a good twelve centuries too recent to be the cloth Jesus was wrapped in when he was put in the tomb.  The study was replicated, performed in several different labs, and any possible source of skew ruled out.

So it would have appeared that this was case closed.  The Shroud of Turin is a medieval fake.

But of course, nothing is ever case closed when it comes to true believers.  Joseph G. Marino and M. Sue Benford wrote a paper in 2000 claiming that the date was inaccurate because the sample used in the 1989 study had come from a more recent repaired area.  That contention, and others like it, were taken apart piece by piece in a study in 2005.  Then only a month ago, forensic scientists Matteo Borrini and Luigi Garlaschelli published research that showed that the pattern of blood stains shown on the shroud was inconsistent with any reasonable pattern that would form if a man was killed by crucifixion, wrapped, and placed prone (either face up or face downward) on a solid surface.

Which is what makes the latest from the people who venerate the Shroud of Turin even funnier.  Because some specialists in facial reconstruction and computer forensics in Italy have taken the image of the face on the shroud, and used digital analysis to come up with what Jesus looked like when he was alive -- then reverse-aged the image to see what Jesus looked like as a child.

So without further ado, here he is... the Christ child: 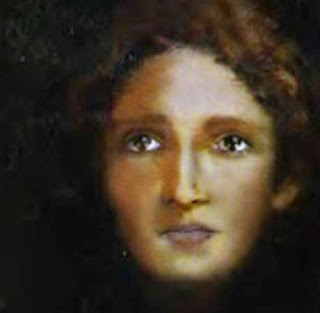 Now, have I made this adequately clear?  The Shroud of Turin isn't really the burial cloth of Jesus.  It was the work of some medieval dudes based on what they thought Jesus looked like, 1,200 years after the fact.  Even the gospels themselves weren't contemporary eyewitness accounts; most scholars believe that the earliest gospel, that of Mark, was written in about 70 C.E., or nearly forty years after Jesus died.  Add to that the fact that there is still a considerable debate in academia over whether Jesus existed at all -- or if, perhaps, he was a composite figure, put together from several historical individuals along with characteristics from mythological personages such as the Egyptian god Osiris.  New Testament scholar Robert MacNair Price writes, "There might have been a historical Jesus, but unless someone discovers his diary or his skeleton, we'll never know."

So what the Italian forensic scientists have done is take an image from a faked artifact, made by people who lived twelve centuries after the fact, of a guy who is only known from writings that were done four decades or more after he died, and who may not have existed in the first place... and reverse-aged the image to see what that person looked like as a boy.

How far removed from reality can you get?  It's as if I took a poorly-rendered drawing of Ian McKellen, reverse-aged it, and decided that was what the real Gandalf looked like in his youth in Valinor.

So anyhow.  The whole thing is harmless enough if it amuses them, I suppose, although you have to wonder what they thought they were accomplishing by all of this.  And once again, we have a group of people whose devotion to an object seems to have rendered them incapable of understanding what's meant by the term "reliable evidence."

Just as well, I suppose, because the kid's sneery expression actually reminds me not so much of the Holy Child as of Joffrey from Game of Thrones: 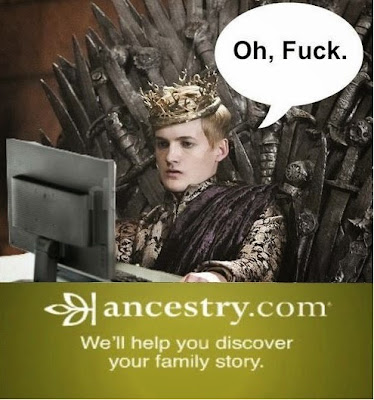 But heaven knows, Joffrey certainly didn't need any more ideas about his divinity.  So maybe it's better if we don't give that point any further attention.
Posted by Gordon Bonnet at 3:01 AM