Rape and pedophilia are two of the most unforgivable crimes.  From the horrific emotional scars they leave in the victims, to the complete disconnect from anything remotely close to human empathy in the perpetrator's mind, attacks of this sort turn my stomach so quickly that I can barely stand to read news stories that cover cases of rape or child molestation.

It is why I have, up to now, avoided dealing with the whole debacle surrounding Josh Duggar, and the allegations that when he was a teenager, he molested five little girls, including his younger sisters.  It seemed to me that the police were dealing with it, and the backlash against the hyper-Christian, ostensibly ultra-pure family would take care of itself.

The Duggars have been the darlings of the Christian Right for some time; their TLC show 19 Kids and Counting was held up as an example of how good Christian families should behave.  Everything was about traditional family values and going to church and dedicating your life to Jesus.  When the allegations surfaced, it was a devastating blow; the "reality show" was cancelled, and Josh Duggar resigned his position as a lobbyist with the Family Research Council, an organization that raises money and support for conservative causes.

Which is as it should be.  You get accused of something like this, you retreat in disarray.  So far, nothing much to comment, unless you count exclamations of disgust.

But then the support for Josh Duggar began to surface.  His family came out on his side, which was unsurprising until you think about the fact that some of the alleged victims are his sisters.  Josh's parents, Jim Bob and Michelle Duggar, said, "Back twelve years ago our family went through one of the most difficult times of our lives.  When Josh was a young teenager, he made some very bad mistakes, and we were shocked.  We had tried to teach him right from wrong.  That dark and difficult time caused us to seek God like never before."

Which, you'd think, would include getting his victims some counseling from professionals trained to help molestation victims, something that there's no indication ever happened.  Josh, on the other hand, was told what could happen to him if he did it again, and was sent to "stay with an acquaintance and do manual labor."  Apparently, in their eyes, this did the trick; Josh Duggar said he's patched it all up with Jesus. "I asked Christ to forgive me and come into my life," he said.  "In my life today, I am so very thankful for God's grace, mercy and redemption."

So far, still not something that's all that surprising.  In this worldview, if you apologize to god, you're just hunky-dory no matter what you did.  When this happened, I still thought, "Nope.  Not going there."

But then Mike Huckabee got involved. 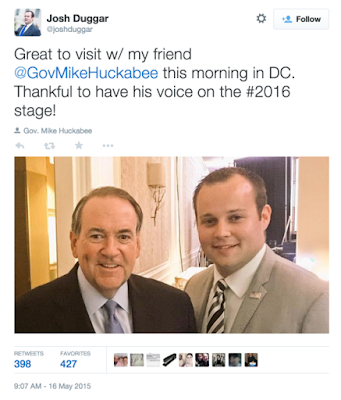 Huckabee, a contender for the Republican nomination for president, has been vitriolic in his stance against LGBT rights.  In a speech just last month sponsored by the Family Research Council, Huckabee said that legalizing gay marriage would lead to Christians being arrested for their beliefs:


If the courts rule that people have a civil right not only to be a homosexual but a civil right to have a homosexual marriage, then a homosexual couple coming to a pastor who believes in biblical marriage who says ‘I can’t perform that wedding’ will now be breaking the law.  It’s not just saying, ‘I’m sorry you have a preference.’  No, you will be breaking the law subject to civil for sure and possible criminal penalties for violating the law….  If you do practice biblical convictions and you carry them out and you do what you’ve been led by the spirit of God to do, your behavior will be criminal... Christian convictions are under attack as never before.  Not just in our lifetime, but ever before in the history of this great nation.  We are moving rapidly towards the criminalization of Christianity.

And this same man, who has over and over again claimed that marriage between two same-sex people in a committed relationship is an abomination, has come out unequivocally in support of Josh Duggar:


The reason that the law protects disclosure of many actions on the part of a minor is that the society has traditionally understood something that today’s blood-thirsty media does not understand — that being a minor means that one’s judgement is not mature.  No one needs to defend Josh’s actions as a teenager, but the fact that he confessed his sins to those he harmed, sought help, and has gone forward to live a responsible and circumspect life as an adult is testament to his family’s authenticity and humility... (F)ollowing Christ is not a declaration of our perfection, but of HIS perfection.   It is precisely because we are all sinners that we need His grace and His forgiveness.  We have been blessed to receive God's love and we would do no less than to extend our love and support for our friends.  In fact, it is in times like this that real friends show up and stand up.  Today, Janet and I want to show up and stand up for our friends.  Let others run from them. We will run to them with our support.

Then, there's the fact that when the story about Josh Duggar hit the media, Judge Stacy Zimmerman ordered that the file on the allegations be destroyed.  No reason was given, and Springdale Police Department spokesperson Scott Lewis said that this was unusual -- that records of this kind are typically kept indefinitely.  But the situation becomes a little clearer when you add to that the fact that when Huckabee was the governor of Arkansas, he twice appointed Zimmerman to serve on influential committees, and that she gives prominent mention of her ties to Huckabee on her re-election website.

Gotta stick together, you know.  Can't have any nasty allegations stinking up the party of the pure of heart.

The whole thing has such a nauseating smell of hypocrisy that I barely know where to begin.  The man who in his stump speeches has been all about "traditional family values" rushes in to support an accused pedophile, while simultaneously expressing revulsion toward consenting adults who happen to be attracted to members of the same sex.  The fact that the Duggar family is "saved" somehow puts them outside of the realm of criticism; the media that has brought to light these charges is "blood-thirsty," and Josh himself is "responsible and circumspect" because he "confessed his sins."

So let's make sure that a judge orders the documents destroyed, and pretend the whole incident never happened.

I think that it's the self-righteousness that bothers me the most.  Even the mealy-mouthed "we're not perfect" declarations by the Duggars, and by Huckabee about them, smacks of "but because we're saved, we're going to heaven no matter what, so we're still better than you godless scum."  They've set themselves as paragons; just the fact that they felt the need to have a "reality show" about their family speaks volumes.

Yes, I know, I'm not perfect myself.  I've done bad things, things that I very much wish I could go back and undo.  I've tried to make amends when I could, and (most importantly) tried not to repeat my mistakes.

The difference is, I know that the times I've fallen short morally can't be fixed by apologizing to some invisible Sky God.  Forgiveness comes from the people you've hurt, not from Jesus.

Nor, incidentally, from Mike Huckabee.
Posted by Gordon Bonnet at 3:54 AM