Someone I know posted a cartoon on social media a couple of days ago.  It had a pissed-off looking old woman on it, and the caption was, "It's 'One Nation Under God," or bite my ass and leave."

I've always been a little mystified about the fervor with which some people demand that those words be in the Pledge of Allegiance.  The same fervor is invoked when anyone mentions taking "In God We Trust" off our currency.  Besides the fact of marginalizing people in this country who are not religious -- a number that by recent polls now amounts to one in five -- these statements also imply that Buddhists, Muslims, Sikhs, and members of other religions who do not worship the Judaeo-Christian god have no place here.

More to the point, however, I've never heard a cogent argument for why those phrases should be part of our statement of allegiance to our country, or on our money.  In the first case, you're expecting people either to recite a statement in public that is, for them, a lie, or else refuse (or at least refuse to say that line) and invite censure.  But even more mystifying is the statement of faith on currency.  What happened to "The love of money is the root of all evil" (1 Timothy 6:10) and "Render unto Caesar those things that are Caesar's, and unto God those things that are God's" (Mark 12:17)?  It seems to me a little odd to put a religious statement on something that the bible repeatedly derides as bad.  (Remember "It is easier for a camel to pass through the eye of a needle than a rich man to enter the kingdom of heaven?") 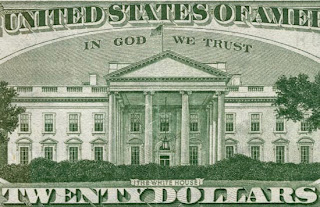 Be that as it may, every so often you hear vitriolic attacks launched against people who, like me, would like that language removed, not because we object to other Americans believing in any god they want to, but because the implication that we all have to believe that way is exclusionary.  You can pray anywhere you like; contrary to popular belief, you are free to pray in public schools, as long as (1) those prayers don't interfere with what's going on in the classroom, (2) you're not requiring anyone else to pray along with you, and (3) such prayer is not school-sponsored.  (I'm guessing there's a lot of praying going on immediately prior to my final exam, for example.)  Why the demand that there be public, government-endorsed language that seems to exist only to make a good quarter of American citizens feel that they aren't welcome in their own country?

As more and more people recognize that such statements are not only disrespectful but unnecessary, the people who want to keep them where they are become more and more desperate.  Take, for example, what religious writer Jessilyn Justice had to say last week about her views and those of radio talk show host Paul McGuire. Apparently, Justice and McGuire think we have to keep "In God We Trust" on the dollar bill, because otherwise we're going to initiate the End Times:

"The world system is a control system that is both spiritual and economic," McGuire said at the Prophecy in the News conference.  "Money is all about captivity, slavery and control.  That is its essential purpose.  It's [sic] essential purpose is not an economic instrument of exchange.  It's about control and the occult and spirituality."

McGuire points to one of the founding theories of atheism, Darwin's theory of evolution, and Space Odyssey co-author Arthur C. Clarke to connect atheism, money and the occult: Science is magic. To remove God from the money would allow the occult to take over.

McGuire says the dollar bill is bursting with blatantly occult symbols, meaning the United States economic system is based on magic and sorcery opposed to logic and principles.

The answer?  To keep God in money, McGuire says, which could mean leaving Him on the bills, as well.

Well, first of all, Arthur C. Clarke didn't say "Science is magic," he said, "Magic is science we haven't understood yet," which is kind of the opposite.  And second, I don't think having "In God We Trust" on our currency has had much effect in keeping money from being about manipulation, power, and control.  If that's why the phrase is there, it's not working.

But third, something I've found puzzling is why a lot of the Christians go on and on warning us about preventing the End Times.  You'd think they'd be knocking themselves out to encourage us atheists to do stuff to bring the End Times on, because don't they believe that the first thing that will happen is that all of the holy people will be assumed bodily into heaven?  Meaning that after that, they won't have to deal with all of the annoying people who don't believe exactly like they do?  You'd think they'd be saying, "Go ahead.  Take "One Nation Under God" out of the pledge.  See what happens next.  Ha ha ha."

But they don't.  Most of the stuff I've read is all about making sure that individuals and governments do everything they can to prevent the End Times, which is a little peculiar if you really believe that you're going to get your eternal reward in heaven and all the bad guys are going to get their just deserts.

Almost sounds as if they aren't completely convinced that stuff is true, either.

So the bottom line is, unless you believe in some sort of occult magical significance of the words, there's no good reason to keep statements of religious faith in the Pledge of Allegiance and printed on our money.  But given that McGuire was right about one thing -- this isn't about logic and principles -- I'm expecting that change isn't going to happen any time soon.
Posted by Gordon Bonnet at 2:58 AM