I was discussing with a friend a couple of days ago the devastating floods that have hit Texas, caused by an aberrant weather pattern that is showing no signs of going away any time soon.

"Given that there are so many climate change deniers in Texas," my friend asked, "what do you think they'll blame it on?"

"Oh, I dunno," I responded.  "Probably gay people and President Obama, I'd guess."

You know, there are times I'd rather not be right. Flooding in Houston [image courtesy of the Wikimedia Commons]


If God is judging Texas, it’s because of the witchcraft and sodomy that we’ve allowed to run rampant...  [T]he places that are underwater [are] are overrun with witchcraft and sodomy.  If you go into those areas, you can just see it...  Houston has a whole area that is like Sodom and Gomorrah.  It even has a sodomite mayor.

What I'm wondering is how god could design a flood that would only hit witches and gay people.  I mean, it's not like there's any way to stop flood waters from wiping out pretty much anyone in their path, so unless god in his Infinite Wisdom and Mysterious Ways induced all of the sodomites and witchcraft practitioners to build their houses on low ground, he's pretty much smiting everyone at the moment.

But you'll be relieved to know that there's not just sex and witchcraft behind the floods, there's also the looming, sinister, evil, all-powerful figure of...

Why would President Obama send floods to Texas, you might ask?  Is it just because Texas is conservative?  Because if that's it, he should be flooding most of the southeastern United States.  There has to be more to it, right?

Of course, right.  Obama is flooding Texas because they caught on to what he was doing regarding Jade Helm 15.

For those of you who have not been keeping up with the latest conspiracy theories, Jade Helm 15 is a set of military maneuvers taking place in Texas that were a front for a government takeover of the state that was so top-secret that the Army announced what they were intending to do three months early.  That's how sneaky these guys are.  "I have an idea!  Let's confuse and confound them by telling them all our plans!  They'll be so baffled by this ploy that when we follow through with them, they'll be caught completely unawares!"

So apparently Obama got mad that the Texans were on to his cunning plot, and weren't just cooperating and letting him and his thugs declare martial law and herd everyone into FEMA Death Camps conveniently disguised as WalMarts.  He got so mad, in fact, that he used his super-powerful weather weapons to teach Texas a lesson.  Says writer Susan Duclos:


As I'm looking through breakingnews [sic] headlines, and seeing the continuous references to the extreme weather so concentrated over TX, and coupled with the continuous chemtrailing that happens throughout the US, I can't help but think that what is going on right now as part of the Jade Helm "exercize" [sic], could not actually be the domestic roll out of weather warfare on an agressive [sic] scale. We know they can control the weather to at least some degree. We know that the chemtrailing over CA and in the Pacific moddifies [sic] the jet stream to both keep CA dry and to force that precipitation east towards TX and other southern states.  We know that Jade Helm is "pretending" that TX is a hostile enemy that must be engaged.  The millitary is already rolling out across the state as part of this "drill".  Why then, is it not reasonable to assume that as part of this "mock civil war drill" that they would not practice using the tools that they have in their arsenal?


Let me just recommend, Ms. Duclos, that you not only use your computer's function called "spell check," that you consult a dictionary and look up the definition of the word "reasonable." 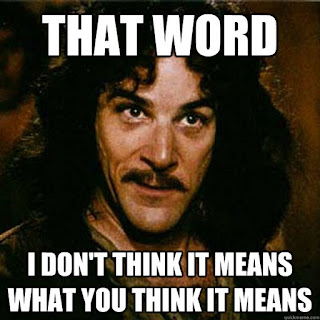 So there you have it: this isn't a weather event, it's either a punishment by god for gay sex and witchcraft, or it's the result of a weather weapon wielded by Barack "Professor Evil" Obama.  Myself, I just hope that the rains stop, because there's been enough devastation and death already.  And also so that these loons will shut up and go back to their previous hobby, which is probably pulling on the straps of their straitjackets with their teeth.
Posted by Gordon Bonnet at 2:54 AM