The battle over the LSEA just took another weird turn.

The LSEA is the Louisiana Science Education Act, a 2008 law that introduces "teach the controversy" and "academic freedom" provisions into state science education guidelines as a way of levering in creationism, intelligent design, climate change denialism, and other loony anti-scientific ideas that are currently in vogue with the powers that be.  Every year there's a push to have the law repealed, and every year it fails to achieve the requisite number of votes, despite the trenchant comment by science education activist Zach Kopplin, "We don't give teachers the academic freedom to teach that 1 + 1 = 3."

In 2013, the defense of the law reached a new height of bizarre desperation, with State Senator Elbert Guillory saying that the LSEA protected multicultural approaches by allowing science teachers to tell their classes about witch doctors.  (I swear I'm not making this up; the entire quote is in the link provided.)  And this year, Guillory made another baffling statement in defense of the LSEA, this time from the standpoint of historical precedent:


There was a time, sir, when scientists thought that the world was flat.  And if you get to the end of it, you’d fall off.  There was another time when scientists thought that the sun revolved around the world.  And they always thought to ensure that anyone who disagreed with their science was a heretic.  People were burned for not believing that the world was flat.  People were really badly treated.  My point, sir, is that not everyone knows everything.  And in a school, there should be an open exchange of ideas.  Knowledge only grows when people can talk about [sic], and have this intellectual back-and-forth, and discourse, with all ideas on the table.  To restrict ideas is against knowledge and against education.

Okay, where do I start?

First, I think you're confusing "scientists" with "religious leaders."  There has never been a Scientific Inquisition, wherein anyone who disbelieves in the Law of Gravity is found guilty of heresy and burned at the stake.  You are free to disbelieve in science all you like, in fact; this doesn't make you a heretic, it makes you an idiot.

It was scientists who disproved the flat Earth and geocentric models, actually; Eratosthenes accomplished the first, all the way back in the third century B.C.E., and Nicolaus Copernicus the second with his De Revolutionibus Orbium Coelestium in 1543.  Any serious opposition to these ideas came from organized religion, which by and large taught that knowledge comes from the bible and from divine revelation, not from experimentation and logic.

Then there's Guillory's claim that we're somehow stifling knowledge by telling biology teachers that they can't teach their students creationism.  "An open exchange of ideas," Guillory says, is critical.  On the surface, he's right; we do need to be able to talk about all ideas, and that's how our knowledge grows, and wrong ideas are winnowed out.

It's that last piece that's missing from Guillory's statement, and therein lies the problem.  Because if creationism and climate change denialism are "put on the table" for honest discussion, it becomes abundantly clear that there's not a shred of evidence in favor of either one.  What Guillory seems to want is not that all ideas are considered, but that all ideas are accepted.

So a geology teacher is supposed to "put on the table" the claim that the Earth's mantle isn't made of liquified rock, but of cherry pie filling?  And that the crust is actually made of graham crackers?

Just in the interest of "intellectual back-and-forth," you understand. 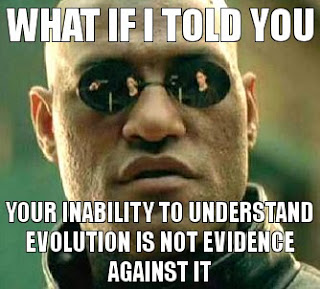 None of that apparently mattered, as the repeal-the-LSEA measure failed again, having been killed in committee on a 4-3 vote.  The reality-denying CherryPieologists won the day.

I live in hope, however, that the tide is turning, however slowly, and that eventually we'll have educational oversight by people who trust scientific research over the philosophical meanderings of a bunch of Bronze-Age sheepherders.

But as Aragorn said, "That day is not today."
Posted by Gordon Bonnet at 4:00 AM