For the past seven years, we've heard over and over that President Obama is planning on taking away our guns, outlawing Christianity, rounding True Americans up into FEMA- run death camps, and establishing a fascist dictatorship.

I think if my American readers will take a moment to look around them, they can confirm for themselves that none of this has happened.

You would think that a zero-percent success rate at predicting the future would induce some of the loonies who have been spouting this nonsense to reconsider their arguments.  You would think that if, after seven years, there's been no sign of a Liberal Gestapo forming, people would say, "Wow.  I guess I was wrong about all of that.  What a goober I am."

New from the "No, really!  Listen!  This time it's real!" department, we have the contention that Jade Helm 15, a military operation in the southwestern United States, is a cover for the impending takeover of Texas.

Why Texas?  Well, insofar as you can ask any kind of logical question about this claim, apparently Texans think that it's because they're the last bastion of patriotism, and Obama wants to shut 'em down.  Or something like that.  Bastrop, Texas resident Bob Wells summarized the idea thusly:


It’s the same thing that happened in Nazi Germany: You get the people used to the troops on the street, the appearance of uniformed troops and the militarization of the police.  They’re gathering intelligence.  That’s what they’re doing.  And they’re moving logistics in place for martial law.  That’s my feeling.  Now, I could be wrong.  I hope I am wrong.  I hope I’m a 'conspiracy theorist.'

The unspoken punch line, of course, was "But I'm not."  And all of this is despite the efforts of military leaders to quell the panic.  Lt. Col. Mark Lastoria was sent in to a public meeting to clarify what was going on and answer any questions, and he was met with this sign: 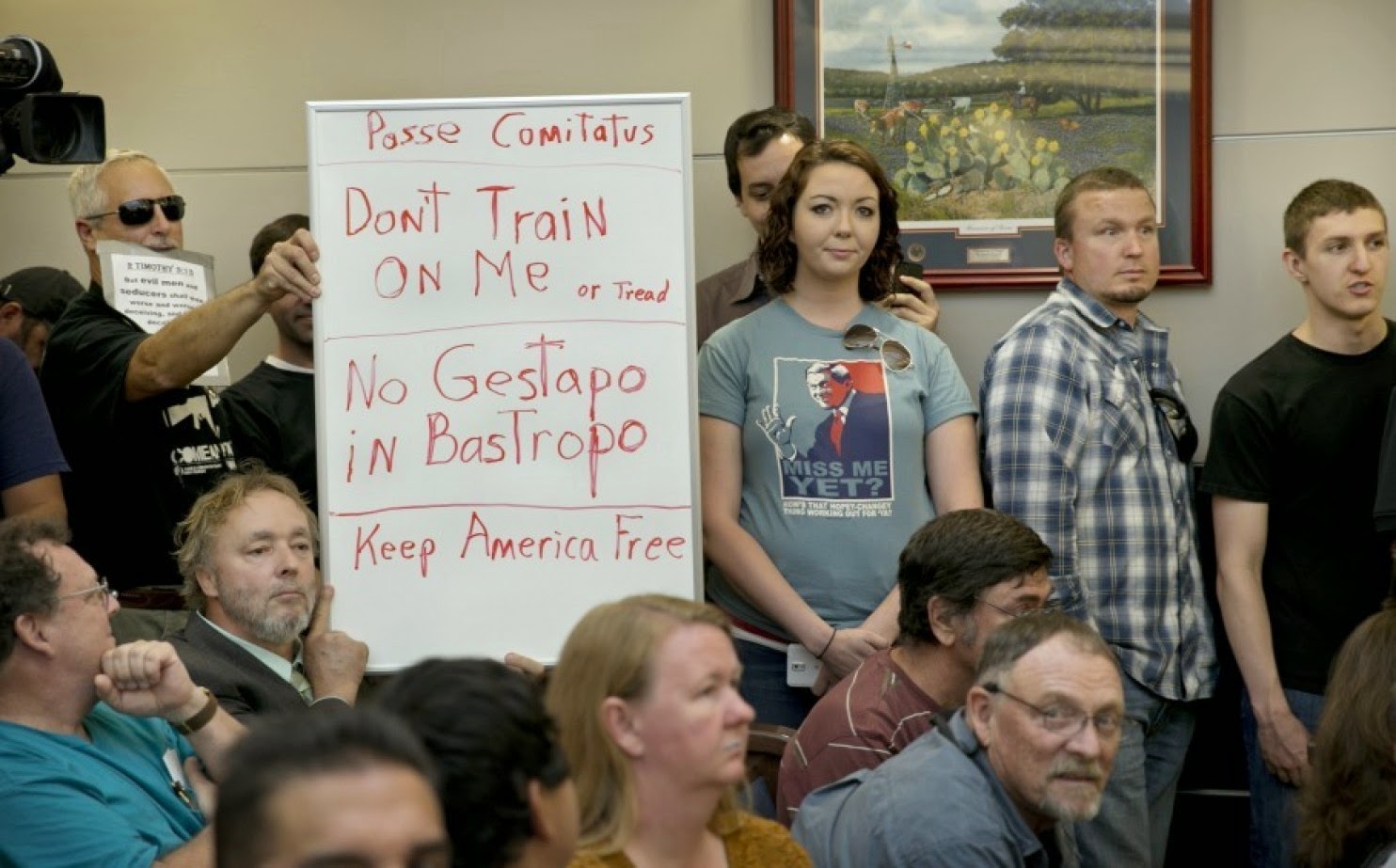 [image courtesy of photographer Jay Janner and the Austin American-Statesman]

Lastoria soldiered on despite the crazy-talk.  No, there wouldn't be soldiers running around gunning down innocent civilians.  The whole thing was pre-planned to take place in remote areas, and they'd made a map available of where the operation was occurring.  Soldiers participating in the activity would be wearing orange armbands, so that anyone who saw them would know who they were and what they were doing.

The whole thing, Lastoria said, was to train soldiers in how to work in hostile areas.  They were not implying that Texas was a hostile area.

Although he may well have changed his mind on that point after the meeting.

And of course, such a claim wouldn't be complete without Alex Jones fanning the flames.  Jones, who amazingly enough is still on the air even though he (1) has been batting zero, prediction-wise, for decades, and (2) apparently has three-quarters of a pound of LaffyTaffy where most of us have a brain, opined thusly on his broadcast InfoWars:


[Some] eerie footage out of Fort Lauderdale shows troops conducting a martial law-style drill under the cover of night training to intern citizens.  The secretive drill directly dovetails with the Jade Helm military exercises, in which 1,200 special forces troops will descend on ten US states for domestic training...  I happen to have met the governor when he was attorney general years ago. I happen to know, somewhat, his chief of staff. I happen to know multiple billionaires that know the governor very well and have had dinner with him and he’s stayed at their house, and they tell me he knows exactly what’s going on...  Texas is listed as a hostile sector. Of course we are. We're here defending the republic.

And apparently this ties into a claim that they're using abandon Wal-Mart stores as operational headquarters.

Oh, and people have seen said Wal-Marts being filled with empty coffins, for when the military launches their actual plan and starts slaughtering people.

You know, I'm perfectly willing to believe that our government has sponsored some pretty shady deals, and I'm sure that we don't know 5% of what is actually going on.  Fine.  But if there really was some kind of super-secret plan to stage a military takeover of Texas as a means for establishing a dictatorship in the United States, do you really think that:

And you'd also think that after years of claiming that the United States was going to go down in flames, and being wrong every time, that no one would be listening to Alex Jones any more.

But the way these things work is that the people who rant about them think, afterwards, when nothing untoward happened, that it was only their bravery and selflessness in speaking up that stopped the evil government from succeeding in their evil plans.  You can almost hear the government leaders saying, "Drat!  We'd have gotten away with it, too, if it hadn't been for you meddling kids and your stupid dog!"