One of the most frustrating things about the country I live in is the extent to which money drives policy.

So often, it doesn't matter if you're right; all that matters is whether you have enough cash to sway the people making the decisions.  Questions of justice, fairness, even of truth and falsity, are superseded by whoever can buy the most influence.

Every so often, though, someone will try to change that.  It's an uphill battle, of course.  Trying to reduce the influence of wealthy people is hard, because the people who want things to stay this way are... wealthy.  They've bought themselves into power, and will buy their way into remaining in power if they possibly can.

One of the worst aspects of this is the SLAPP -- strategic lawsuits against public participation.  SLAPPs are suits initiated by rich people or corporations for one reason only; to tie up their less well-heeled opponents in protracted, expensive legal battles.  The ones filing the SLAPP couldn't care less if they win.  Winning isn't the point.

Bankrupting their enemies is. 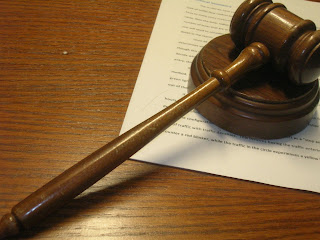 [image courtesy of photographer Brian Turner and the Wikimedia Commons]

The two most commons sorts of SLAPPs are those filed by industry against environmental organizations, and those by charlatans against their critics.  The cost for the legal feels to defend oneself against a frivolous lawsuit is astronomical, and it's often easier to cave in -- to stop the environmental activism, or withdraw the criticisms, than it is to pursue the defense in the courts.

Dr. Steven Novella, for example, has been dragged for several years through the ordeal of defending himself from a libel suit by Andrew Wakefield, author of the discredited study that linked vaccination to autism.  In spite of the fact that Wakefield's study was withdrawn by The Lancet as "utterly false," and Wakefield's devastating smackdown in 2010 by the British General Medical Board (Wakefield was convicted by the board of three dozen charges, including having acted "dishonestly and irresponsibly" in his published research), he has still pursued a vindictive lawsuit against Novella, who has been one of his most outspoken critics.  Novella writes:


What I learned when I became the target of a SLAPP suit (that is still ongoing) is that anyone with money can take away your free speech at will. It works like this: if you express an opinion publicly that someone else doesn’t like because it is critical of them, their beliefs, their business, etc. then they can hire a lawyer and send you a cease and desist letter. You are now faced with a dilemma – take down your blog, article, podcast, video, or whatever and allow your free speech to be suppressed, or potentially face tens and perhaps hundreds of thousands of dollars in legal fees.

Except for those few states with effective anti-SLAPP laws (California, Washington, Oregon, Nevada, Texas and the District of Columbia – Florida just passed one which has not yet gone into effect), if you refuse to remove your free speech and you get sued, then expect to spend large sums of money and years of your life defending your rights. Here’s the thing – even if the case against you has zero merit and no chance of winning in the end, the lawsuit is a financial game of chicken. There is no way to shut the case down early. There is no bar for meritless cases.

The net effect of this is that if someone has money they can shut down your free speech at will. This, of course, has a chilling effect on free speech that can go way beyond the one instance of speech being targeted.

A similar case is that of Harvard medical researcher Dr. Pieter Cohen and three other scientists who are being sued by Hi-Tech Pharmaceuticals, Inc., for a scholarly paper they wrote regarding a supplement that may contain biologically significant doses of an amphetamine isomer.  Cohen et al. wrote:


Consumers of Acacia rigidula supplements may be exposed to pharmacological dosages of an amphetamine isomer that lacks evidence of safety in humans. The FDA should immediately warn consumers about BMPEA and take aggressive enforcement action to eliminate BMPEA in dietary supplements.

Hi-Tech has sued the researchers for a total of $200 million in compensatory and punitive damages for libel and slander.

Both the environmental and the free speech aspects of this practice are profoundly distressing to me.  The idea that rich corporations are driving our environmental policy and squelching the ability of scientists and writers to criticize, or even bring to light, what is going on, is something that should raise red flags for anyone who values the truth and fair play.  The implications cut deep; even as a blogger, I've had my worries about pissing someone off, and getting sued.  I can't afford the legal fees -- so whether I was in the right or in the wrong, such a lawsuit would have the effect of shutting me down pretty much instantaneously.

There's a hope, though; Representative Blake Farenthold (R-TX) has introduced a bill into congress called the SPEAK FREE Act, which would have the effect of establishing a procedural mechanism for dismissing frivolous lawsuits rather than pursuing them at the expense of the defendants.  The defendant has the right to file a motion showing "that the claim at issue arises from an oral or written statement or other expression by the defendant made in connection with an official proceeding or about a matter of public concern."  It then falls back on the plaintiff to demonstrate that his/her case has merit.  If that cannot be established, the case is summarily dismissed, and the court costs are borne by the plaintiff.

In other words, this acts as an anti-SLAPP law.  It takes nothing away from legitimate libel and slander suits; it simply makes it far harder for wealthy individuals or corporations to pursue frivolous lawsuits that have, as their sole aim, bankrupting the people they're attacking.

I strongly urge you to support this legislation.  You can find out ways to make your voice heard here.

So as disheartening as our Money-Talks system of government can be, here in the United States, it's encouraging that sometimes people stand up.  It happened only a couple of weeks ago, with the unprecedented slapdown of billionaire Harold Hamm, CEO of the petrochemical corporation Continental Resources, Inc.  Hamm had demanded that the University of Oklahoma fire scientists who were researching the connection between hydrofracking and earthquakes, reminding the administrators along the way of the huge amount of financial support he'd given the university.

The effort backfired.  An email from Larry Grillot, Dean of the College of Earth and Energy, was made public, and it said in part, "Mr. Hamm is very upset at some of the earthquake reporting to the point that he would like to see select OGS staff dismissed."  Grillot came down on the side of the scientists, saying, "Foremost for us is academic freedom," and politely told Hamm to shove off.

This announcement was tempered, however, by the passage immediately afterwards of two bills in the Oklahoma state congress that makes it illegal for community governments to ban fracking.  So the news, as always, was a mixed bag.

But the University's stance, and the anti-SLAPP bill, are both important steps toward reducing the influence that money has on policy.  We have a long way to go before our government can be called anything but a plutocracy; but we should all support any movement in the right direction.

Posted by Gordon Bonnet at 2:25 AM