The cost of scientific ignorance

Arrogance (n.) -- having or showing the insulting attitude of people who believe they are better, smarter, or more important than other people; exaggerating one's own worth in an overbearing manner.

There.  Just thought I'd clear that up, right at the outset.  Because evidently Jeb Bush needs to consult Webster's before he starts throwing the word around. 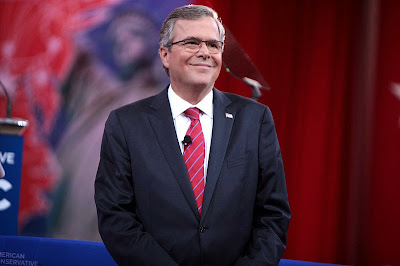 The subject comes up because of a campaign stop in New Hampshire that the presidential hopeful made earlier this week, in which he brought up the topic of climate change.  He was specifically responding to President Obama's comment that climate change was a national security risk -- something just about every climate scientist in the world would agree with, given its projected effects on sea level, storm intensity, and shifts in rainfall.

Bush, however, disagreed.   "If the president thinks this is the gravest threat to our national security," he told the crowd, "it seems like he would say, 'let's expand LNG (liquefied natural gas) as fast as we can to get it into the hands of higher carbon-intense economies like China and other places. Let's figure out ways to use compressed natural gas for replacing importing diesel fuel, which has a higher carbon footprint,'"

This conveniently ignores the role that methane itself has in climate change.  It is true that natural gas produces less carbon dioxide, both per pound of fuel and per kilowatt-hour of energy, than coal does; however, leaked natural gas from fracking is already outweighing any savings in the carbon budget that would be accrued from switching from coal to gas.  In a paper from last October by Schneising et al., the authors write:


In the past decade, there has been a massive growth in the horizontal drilling and hydraulic fracturing of shale gas and tight oil reservoirs to exploit formerly inaccessible or unprofitable energy resources in rock formations with low permeability.  In North America, these unconventional domestic sources of natural gas and oil provide an opportunity to achieve energy self-sufficiency and to reduce greenhouse gas emissions when displacing coal as a source of energy in power plants.  However, fugitive [i.e., accidental/unreported] methane emissions in the production process may counter the benefit over coal with respect to climate change and therefore need to be well quantified.  Here we demonstrate that positive methane anomalies associated with the oil and gas industries can be detected from space and that corresponding regional emissions can be constrained using satellite observations... calling immediate climate benefit into question and indicating that current inventories likely underestimate the fugitive emissions.

But then, Bush goes even further, accusing the scientists who have brought such data to light "arrogant:"

Governor Bush, let me clarify some of the "convolution" for you; speaking with authority about a topic on which you are an expert is not arrogance.  Arrogance is when you exaggerate your knowledge for the purposes of self-aggrandizement.  (Cf. the above definition.)  And ignoring the evidence, and stating that the science is "unclear" when it is not, is one of two things; if it's done unwittingly, it's called "ignorance;" if it's done deliberately so as to placate voters and tell them what they want to hear even though you know it is untrue, it's called either "pandering" or "lying outright," depending upon how harsh you want to be.

And of course, it is exactly this sort of thinking that is why the House passed a bill last year forbidding scientists to give expert testimony on their own research.  Can't have those arrogant scientists tooting their own horns, dontchaknow.  Gotta make sure we're only taking advice from reg'lar folk.

You know, folk who don't know what they're talking about.

I don't know how we got here, in a place where being knowledgeable about a field makes you arrogant, and being an expert on a topic makes you biased.  The politicians, I think, have largely forgotten that in science we're talking about facts and evidence, not opinions and beliefs.

Put succinctly, stating that the data support a causal connection between fossil fuel use and climate change is not arrogant.

It's simply true.
Posted by Gordon Bonnet at 2:59 AM