The problem with Seymour

A few months ago, I made the point that the fallacy called appeal to authority is not as simple as it sounds.

On the surface, it's about not trusting authorities and public figures simply because they're well-known names.  You can convince anyone of anything, seemingly, if you append the words "Albert Einstein said so" after your claim; it's the reason I fight every year in my intro neuroscience class with the spurious claim that humans use only 10% of their brains.  You see this idea attributed to Einstein all the time -- although it's unlikely that he ever said such a thing, adding "apocryphal quotes" as another layer of fallacy to this claim, and the claim itself is demonstrably false.

The problem is, of course, there are some areas where Einstein was an expert.  Adding "Einstein said so" to a discussion of general relativity is pretty persuasive, given that relativity has passed every scientific test it's been put through.  But notice the difference; we're not accepting relativity because a respect physicist thought it was true.  Said respected physicist's ideas still had to be vetted, retested, and peer-reviewed.  It's the vindication of his theories that conferred credibility on his name, not the other way around.

The situation becomes even blurrier when you have someone whose work in a particular field starts out valid and evidence-based, and then at some point veers off into wild speculation.  This is the core of the problem with an appeal to authority; someone having one or two right ideas in the past is no insurance against his/her being wildly wrong later.

This is the situation we find ourselves in with Seymour Hersh.  Hersh is a Pulitzer Prize-winning investigative journalist whose work on exposing the truth about the My Lai Massacre and the torture of prisoners of war by American soldiers at Abu Ghraib was groundbreaking.  His dogged determination to get at the facts, even at the cost of embarrassing the American government and damaging the reputation of the U.S. overseas, earned him a well-deserved name as one of the giants of journalism. 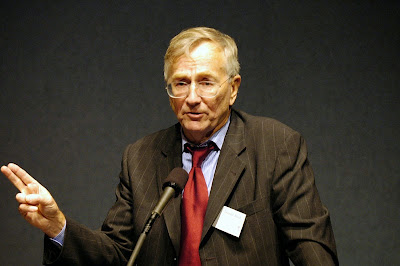 The problem is, Hersh seems to have gone badly off the rails lately.  His latest piece, which he's pursuing with the tenacity of a bloodhound, is about the claim that the public version of the death of Osama bin Laden is a complete fabrication -- that the United States had captured bin Laden all the way back in 2006, and with help from the Saudis was using him as leverage against al Qaeda.  When his usefulness began to wane, they had him killed and then faked a raid against his compound in Abbottabad, then made public the story of the brave soldiers who'd risked their lives to take down a wanted terrorist.

The problem is, as is described in more detail in an article in Vox, the claim is supported by little in the way of evidence.  Hersh's two sources admittedly have no direct knowledge of what happened.  The story itself is fraught with self-contradictions and inconsistencies.  And then, to make matters worse, Hersh has recently begun to claim that the United States government has been infiltrated by members of Opus Dei (a Roman Catholic spiritual organization made famous, or infamous, by The DaVinci Code), that the chemical weapons attacks in Syria were "false flags" staged by the Turkish government, and that the U.S. is training Iranian terrorists in Nevada.

None of these, apparently, have any evidential support beyond "an anonymous source told me."  Hersh, seemingly, has slipped from being a hard-hitting investigative reporter to a wild-eyed conspiracy theorist.

He's not backing down, however.  He granted an interview to Slate in which he reiterated everything he's said.  He seems to spend equal time during the interview defending himself without introducing any further facts, and disparaging the interviewer, journalist Isaac Chotiner.  "What difference does it make what the fuck I think about journalism?" Hersh asked Chotiner.  "I don’t think much of the journalism that I see.  If you think I write stories where it is all right to just be good enough, are you kidding?  You think I have a cavalier attitude on throwing stuff out?  Are you kidding?  I am not cavalier about what I do for a living."

And only a moment earlier, when asked a question he didn't like, he said to Chotiner, "Oh poor you, you don’t know anything.  It is amazing you can speak the God’s English."

This is a vivid, and rather sad, example of why a person's reputation isn't sufficient to establish the veracity of their claims.  No one -- including both Albert Einstein and Seymour Hersh -- have the right to rest on their laurels, to expect people to believe something just because they've appended their name to it.

Claims stand or fall on the basis of one thing; the evidence.  And what Hersh has brought forth thus far is of such poor quality that about the only one he's convincing is Alex Jones.
Posted by Gordon Bonnet at 3:50 AM