I have lived through the deaths of people I was close to -- family members, friends, colleagues.  You can't spend 54 years on this Earth without having this experience.  And death can be many things -- peaceful, frightening, a release from suffering, the devastating tragedy of a life lost too young.

Fear of death is pretty much universal, and it's the unknown aspect of it that terrifies most people.  Will there be an afterlife, or just... nothing?  If there is an afterlife, what will it be like?  Despite the similarities between many near-death experiences, the cultural imaginings of the afterlife vary tremendously, from the benign to the horrifying.  And, of course, some afterlives are benign for some (the true believers) and horrifying for everyone else (nonbelievers and devotees of other religions).  So I think it's safest to say that no one has the slightest idea what, if anything, we'll experience after we die.

This explains why the search for immortality has been around for a long, long time.  There are scientific approaches -- usually involving the protection of the telomeres, end-caps on the chromosomes that shorten with the years and seem to have a role in age-related illnesses.  And, of course, there are the legends of people who supposedly achieved immortality by magical means, including the Comte de St.-Germain, Nicolas Flamel, and... Keanu Reeves.

So I suppose it's no surprise that there are people who want to cheat death using technology.  And a company called Paranormal Games claims that they are taking the first steps down this road with a virtual-reality software called Project Elysium, that supposedly can make an interactive 3-D computer model of a deceased love one.

The company hasn't released how it plans to accomplish this -- the software is an entrant in the Oculus VR Jam 2015 contest, where it is rumored to be a favorite for the grand prize.  Presumably the bereaved would provide photographs of the dearly departed, along with other personal details, perhaps even voice recordings, if such are available.  Project Elysium has provided screenshots of people being turned into virtual-reality characters, like the one below: 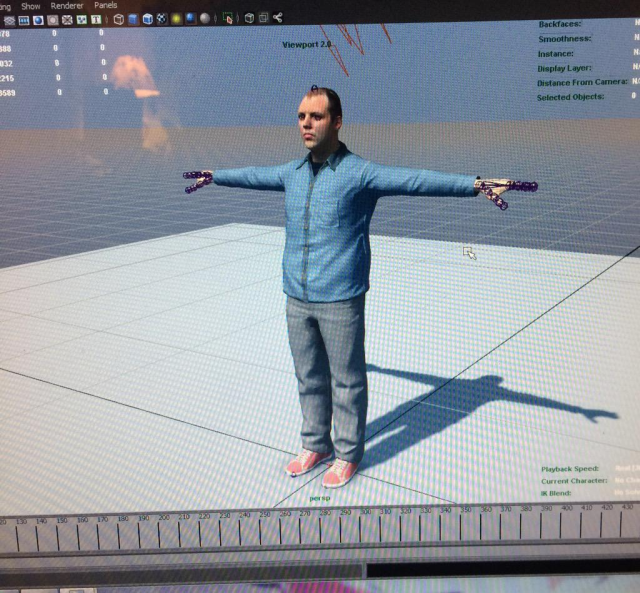 The company will be releasing promotional videos as early as next week.

Now, it stands to reason that any such facsimiles of real people, especially if they are created from still images, will be pretty rudimentary.  At first.  But as we've seen over and over, once something becomes technologically possible, it becomes sophisticated and streamlined fast.  (Consider how digital music storage and retrieval has changed, from the days of CDs to now, when you can have thousands of songs stored on a device smaller than a matchbox.)  Even if Project Elysium is not very authentic-looking at first, all it has to do is demonstrate that software designers can make it work on some level.

After that, it'll be off to the races.

My general sense is that this crosses some kind of ethical line.  I'm not entirely sure why, other than the "it just ain't right" arguments that devolve pretty quickly into the naturalistic fallacy.  Especially given my atheism, and my hunch that after I die there'll be nothing of my consciousness, why would I care if my wife made an interactive computer model of me to talk to?  If it gives her solace, what's the harm?

I think one consideration is that by doing so, we're not really cheating death.  The virtual-reality model inside the computer isn't me, any more than a photograph or a video clip is.  But suppose we really go off the deep end, here, and consider what it would be like if someone really could emulate the human brain in a machine -- and not just a random brain, but yours?

There's at least a theoretical possibility that you could have a computerized personality that would be completely authentic, with your thoughts, memories, sense of humor, and emotions.  But even given my opinions on the topic of religion and the existence of the soul, there's a part of me that simply rebels at this idea.  Such a creation might look and act like me, but it wouldn't be me.  It might be a convincing facsimile, but that's about it.

But what about the Turing test?  Devised by Alan Turing, the idea of the Turing test for artificial intelligence is that because we don't have direct access to what any other sentient being is experiencing -- each of us is locked inside his/her own skull -- the only way to evaluate whether something is intelligent is the way it acts.  The sensory experience of the brain is a black box.  So if scientists made a Virtual Gordon, who acted on the computer screen in a completely authentic Gordonesque manner, would it not only be intelligent and alive, but... me?

In that way, some form of you might achieve immortality, as long as there was a computer there to host you.

This is moving into some seriously sketchy territory for most of us.  It's not that I'm eager to die; I tend to agree with my dad, who when he was asked what he wanted written on his gravestone, responded, "He's not here yet."  But as hard as it is to lose someone you love, this strikes me as a cheat, a way to deny reality, closing your eyes to part of what it means to be human.

So when I die, let me go.  Give me a Viking funeral -- put me on my canoe, set it on fire, and launch it out into the ocean.  Then my friends and family need to throw a huge party in my honor, with lots of music and dancing and good red wine and drunken debauchery.  And I think I want my epitaph to be the one I created for one of my fictional characters, also a science nerd and a staunch atheist:  "Onward into the next great mystery."

For me, that will be enough.
Posted by Gordon Bonnet at 3:00 AM