A visit to the holy construction site

Is it just me, or is Ken Ham sounding a little... desperate these days?

I suppose it's understandable.  Just last year his discriminatory hiring practices lost him $18 million in tax write-offs for his Ark Encounter project, and that's gotta sting.  He's challenged the decision in court, but seems unlikely to win given that he has made a practice of only employing fundamentalist Christians like himself, and the project's website states right up front, "The purpose of the Ark Encounter is to point people to the only means of salvation from sin, the Lord Jesus Christ, who also is the only God-appointed way to escape eternal destruction."

So not much wiggle-room there.  And with the funds drying up, Ham has to start being a little creative with revenue-producing strategies, or the Ark is likely to founder on the rocks and sink. 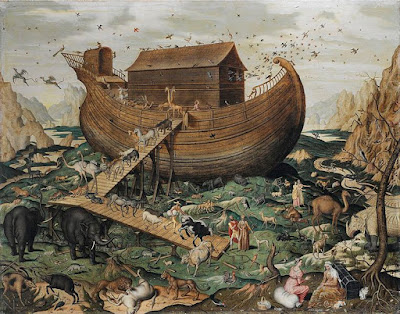 So now, Answers in Genesis, Ham's website, is promoting a new money-maker -- you can visit the site where the Ark Encounter is going to be for only $20 a head ($10 if you're a member of the Creation Museum).  Here's how it's described:


Visitors will have the thrill of witnessing firsthand the historic construction of Noah’s Ark, being built according to the biblical proportions described in Scripture. Our guests will safely observe the Ark from a viewing spot just outside the actual hard-hat area.  It will be their once-in-a-lifetime opportunity to see an Ark being built, which will become the largest timber-frame building in the world...

From this vantage point, Ark visitors will be able to watch the crews assemble the support towers this month, and over the next few months see the placement of lumber and timbers in sections called bents (or “ribs”) on the Ark foundation.

Who could resist that?  $20 a person to see a construction site!  People must be elbowing each other out of the way to be the first for a vacation opportunity like that.  Can't you just hear the conversation in the car?


"Daddy, when are we gonna get there?"

"Yeah!  I can't wait to see the concrete posts!  And the steel I-beams!  And piles of dirt!  This is gonna be the best vacation ever!  I'm so glad we cancelled our plans to go to Disneyland!"

*Dad grins at his son proudly*

So, yeah.  Thrill-a-minute.  I bet they'll make nearly $20 off of this promotion.

You know, what gets me most about all of this is that Ham et al. are spending millions of dollars, employing a crew of hundreds of workers, and taking years to accomplish building an Ark in order to prove that a five-hundred-year-old man and his three sons did the same thing using only hand tools and the materials available in the Middle East in the Bronze Age, like "pitch" and "gopher wood."  Whatever the hell "gopher wood" is.  But you have to wonder if Noah ran into the same sorts of problems that Ham has:


"Hey!  I'll let you see the pile of lumber that we're building the Ark from if you'll give me twenty shekels!  Another ten and you can come visit the kangaroos we just brought back from Australia!  For only fifty, you can be a Gold Star Donor and have your name inscribed on one of the timbers!  For a hundred, I'll... hey, wait, where are you all going?  Get back here!  I mean it!...  I hope you like drowning!  Bastards!"

So that's the latest from the Forty Days And Forty Nights crowd.  The sad part is that there are a good many people with more money than sense who are backing the project, so I'm guessing that Ham will eventually build the thing and pronounce it a triumph for the biblical literalist viewpoint.  He certainly seems determined to keep going -- come hell or high water.
Posted by Gordon Bonnet at 2:45 AM