"Channeling" is a practice that goes back millennia.  The idea that a powerful being could take over a human's body, use it as a vehicle, and thereby dispense wisdom upon the rest of us slobs has a history that extends from the Oracle of Delphi and the Witch of Endor, through the divine visions of Hildegard von Bingen and Joan of Arc, to the spiritualist mediums of the 19th century and more recent New Age channels like Jane Roberts and J. Z. Knight.

A curious current case is that of Darryl Anka, who claims to channel an alien being named "Bashar" from the planet "Essassani."  Anka goes into a trance, and then speaks in a peculiar, stilted voice (evidently that's the accent people have, over on Essassani), and gives us enlightened messages such as the following:


There is only the understanding of the thing that needs to be taught to every child on the planet, and that is the knowledge that every single individual on this planet is already powerful as he or she needs to be to create any reality desired, without having to hurt yourself, or anyone else, to get it.  That’s how powerful you are.

Whoo.  That's one deep message, right there.  Which, of course, is my problem with all of these people; you never really get any specifics.  The ones who claim to channel people from the past (like J. Z. Knight) dodge any questions about the culture and languages spoken by the people from 25,000 years ago, labeling these things as "unimportant."  People like Anka/Bashar can't give us any information about the technology on this purportedly advanced planet, only tell us useful things like "you're already as powerful as you need to be."

Me, I'd rather blueprints for a working warp drive, holodeck, tricorder, replicator, and phaser than I would vacuous messages about how much inner power I have at my disposal.  But maybe I'm just too shallow for enlightened beings like "Bashar." 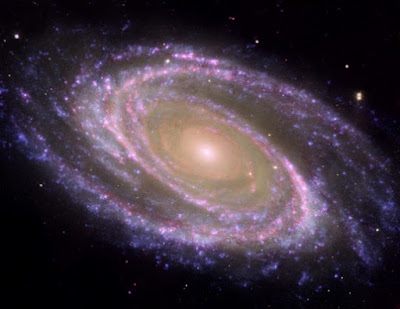 Add that to the fact that Bashar claims to come from "300 light years in the future," thereby demonstrating that a super-advanced alien doesn't know the difference between a measure of distance and a measure of time, and I think we have a pretty good case that Anka's pulling a fast one on us.

Fortunately, there are a lot of people who agree with me.  Skeptoid did a piece on him that's nothing short of scathing.  Here's what they have to say about him over at Generally Thinking, along with a video clip so you can see for yourself what a middle-aged bald guy looks like when he's channeling an alien from the future.  Hell, they even shot him down over at Above Top Secret, and that takes some doing.  Bashar, however, was undaunted, and fired back with a video series called "Debunking the Debunkers."

So he sure showed us.

But now Anka/Bashar has taken it one step further.  He's filed a bunch of grievances against users of Tumblr under the Digital Millennium Copyright Act, a law that protects the intellectual property of individuals distributed electronically, claiming that hundreds of images and gifs are actually Bashar's...

The evidence provided was as follows:


The claim is that my work is in fact copyrighted by “Bashar channeled by Darryl Anka.”  What?  I looked it up.  Darryl Anka believes that he is channeling information from a space alien from the future named Bashar that lives on a planet called Essassani via telepathy.

What exactly is the legal basis for their claim? Maybe it has something to do with “&nbsp;” ?  Is that some kind of alien code?  Or did Tumblr just auto copy and paste the email they got including stray HTML garbage characters?

Now, are you ready for the punchline of all of this?

Tumblr complied with Bashar's request and took down the images and gifs.

Yes, you got it; a man who many believe to be either a swindler or a lunatic, who channels a platitude-spewing alien spirit from "300 light years in the future," is successfully launching a copyright infringement claim against people who have posted their own work, stating that it actually belongs to "Bashar."

I'm trying to think of something to say other than "What the actual fuck?", and failing entirely.

On the other hand, maybe Anka is on to something.  So allow me to make an announcement:

I am channeling an alien spirit, too.  His name is Gleebnorg, and he comes from the planet Thwonk in the third spiral arm of the Andromeda Galaxy.  And Gleebnorg is here to say that he gave Bill Gates the idea for Microsoft back in 1975, and is coming back to demand halvsies.  I mean, fair is fair.

Oh, and Gleebnorg says to tell you all that you're beautiful spirits, and have everything you need in your life to be happy.  More than you need, in fact, so you can unload some of the excess in his direction.

He takes cash, check, or electronic transfer.  Have a nice day.