Back in 1956, a trio of social psychologists, Leon Festinger, Henry Riecken, and Stanley Schachter, wrote a book whose premise still kind of blows my mind, almost sixty years later.

Called When Prophecy Fails: A Social and Psychological Study of a Modern Group That Predicted the Destruction of the World, the book chronicles the apocalyptic prophecies of one Dorothy Martin (in the book, under the alias of Marian Keech), who claimed that she was in telepathic communication with an alien civilization on the planet Clarion.  Her contact informed her that the Earth was going to be destroyed in a huge flood on December 21, 1954, but that the Clarionites were dispatching a spaceship to rescue Martin/Keech and a small group of true believers.

On the fateful day, Martin/Keech and her followers met in her house to await the cataclysm and subsequent rescue.  As midnight approached, they became more and more fearful -- "sitting in stunned silence," as the book describes it.  An hour before the fatal moment, Martin/Keech informs them that she's had a further communiqué that they can only be rescued if they have no metallic objects on their persons -- so off come jewelry, belts, watches, even bras with metal clasps and pants with metal snaps or zippers.  When 12:05 rolls around, and there has been neither flood nor spaceship, someone decides to check a different clock -- because, of course, the clock that says 12:05 has to be wrong.  They find one that says 11:55... so hallelujah!  The prophecy might still be true!

By 4:00 AM, though, even the most devout believers have to admit that something's wrong.  Martin/Keech is devastated, and begins to cry.  But 45 minutes later, she straightens up, and says, "Wait!  I'm getting another message!"  Using "automatic writing," the contact on the planet Clarion informs the true adherents that because of their devotion, the catastrophe has been cancelled.  In the words of Festinger et al.: "The little group, sitting all night long, had spread so much light that God had saved the world from destruction."

So far from losing their faith in Martin/Keech, the failure of the prophecy actually increased her followers' strength of belief.  They were so galvanized that they started a widespread publicity campaign to pass along the message.  In fact, Martin/Keech was apparently so encouraged by the whole thing that she founded the Association of Sananda and Sanat Kumara, a group devoted to religious and spiritual messages from contact with alien civilizations.  She called herself "Sister Thedra" and managed the Association until her death at the age of 90 in 1992 -- but the Association itself is still in existence, and has hundreds, possibly thousands, of members.

What is apparent from this, and other prophecies like it (think of Harold Camping and his forecasting of the End Times a couple of years ago), is that the self-styled prophets actually believe what they're saying.  In other words, they're not liars or charlatans; they're actually delusional.  And since making wacko claims is de facto what delusional people do, that part is hardly surprising.  What still baffles me, though, is that they convince others -- and that those others continue to believe, even after the prophets of doom are proven wrong, again and again. 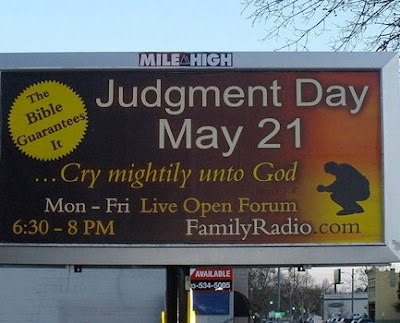 Because we have a new date to worry about.  Don't know if you've heard about it yet.  It's September 13, 2015, and we're already seeing the usual gamut of Signs and Portents that always prefaces the end of the world.  According to an anonymous author over at the site WorldTruth, we're in for some seriously bad shit -- starting with the destruction of the Hoover Dam on September 13 in an "Antichrist Birthing Ritual," with the consequent terrible flood and destruction and death.

And that's only for starters.

How do we know this, you might ask?  Well, it has to do with secret messages on the $50 bill, a conspiracy by Mercedes-Benz/Daimler automobile company, the Georgia Guidestones, the "Jubilee Year," drums, The Economist magazine, the movies Cloud Atlas and Evan Almighty, the San Andreas Fault, and confetti.  It's really quite entertaining, and I highly recommend taking a look.

So we have yet another replay on the way of the Harold Camping nonsense, the Martin/Keech episode described in When Prophecy Fails, and countless others.  In fact, Wikipedia lists 164 times that there have been failed prophecies of the end of the world, going back to Jewish zealot Simon bar Giora and the Essenes, a messianic cult in the First Century C.E., who predicted that the messiah was going to arrive, initiate the End Times, and along the way kick the Romans' asses.  The whole thing more or less came to nothing, as one might expect.  Simon bar Giora was captured, brought back to Rome, and executed by being thrown off a cliff.  The Essenes were pretty well wiped out once Jerusalem fell in 70 C.E.

...  although the Rosicrucians claim that their secret society (so secret, in fact, that there's a Wikipedia article on them) claim direct mystical descent from the Essenes.  So I suppose even the earliest apocalyptic prophecies are still with us, lo unto this very day.

Be that as it may, I don't think you have a lot to worry about, come September 13.  I'm planning on business as usual, which is honestly kind of disappointing, because that's the first week of the new school year, and I'm sure we'd all appreciate something to liven things up at that point.  I don't wish catastrophic floods on anyone, but one or two Apocalyptic Horsepersons could be kind of entertaining.  More interesting, at least, than biochemical functional groups, which is what we'll be studying at that point.
Posted by Gordon Bonnet at 2:33 AM