We're all biased.  It's inevitable.  Even the most clear-headed and rational of us has opinions, judgments, political leanings.  We can't help but jump to conclusions with little evidence, now and again.  I distinctly recall one student who signed up for my intro-to-neuroscience class a while back, whose appearance made me think "Trouble" -- multiple piercings, longish hair, t-shirts for bands whose names alone were barely school-appropriate -- and who turned out to be one of my best, most interested, most intellectually passionate students that year.  (To my credit, I figured out my mistake after one class session with him.)

So we can't escape bias, but the key is to keep the light shining on them.  And I'm going to propose a test that can be applied in just about any situation to determine whether you are coming to a logical, evidence-based conclusion, or whether you're falling for your own unconsidered predilections.

Take, for example, the story that hit the news a couple of days ago about the young Muslim woman who had an unpleasant experience aboard a United Airlines flight.  Tahera Ahmad, director of Interfaith Engagement for Northwestern University, was being served by the flight attendant, and asked for an unopened can of diet soda, and was refused.  She didn't want an opened can, citing reasons of hygiene, but the flight attendant allegedly said, "Sorry, I just can't give you an unopened can, so no Diet Coke for you."

When Ahmad understandably objected to this rather peculiar policy, not to mention its unequal application, a nearby passenger shouted at her, "You Muslim, you need to shut the fuck up -- you know you would use it as a weapon, so shut the fuck up!"

And no one stood up for her.

The experience left Ahmad in tears from humiliation, as most of us would be in her situation. 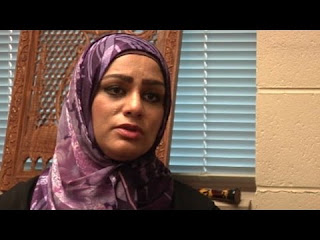 Now, I don't mean to go into the details of what happened; according to United Airlines, they are now "investigating the situation."  And honestly, at the moment, we have only Ahmad's account of the incident.  But what interests me more is the reaction of people who have written about Ahmad's experience -- because a great many of them have questioned its veracity.

"I find it hard to believe," one woman wrote, "that someone could be treated this way in full view and hearing of dozens of passengers and the flight crew, and no one put a stop to it.  This doesn't have the ring of truth.  It seems more like something she'd make up, one of those invented stories of discrimination that allow her to get undeserved sympathy.  I bet when the airlines investigates, they'll find that none of this happened."

As far as the woman's claim that it's unimaginable that someone wouldn't have intervened on Ahmad's behalf, I hardly need to point out that there have been many documented cases of actual physical violence -- assault or rape -- that have occurred in full view of passersby, none of whom chose to get involved.  But if you read the commenter's objections, and thought, "Yeah, she has a point...", I want you to do a little thought experiment for me.

What if we changed things around?  What if, instead of a young Muslim woman in a headscarf being taunted and humiliated by people who are more than likely white American Christians, it had been a young white American Christian woman on Saudia Airlines, who had asked some innocent question and had been ridiculed and jeered at by a bunch of Muslim men?  Would you have questioned her story then?  Is your outrage the same?

Because if not, you are biased.

We know nothing about Tahera Ahmad except for her gender, occupation, and religion.  The leap to the conclusion that she might have made the whole thing up in a ploy for appearing oppressed was made on the basis of nothing but the above, because we have no other evidence to go on.  And I would argue that it's likely that the sole reason for skepticism was her religion.  (For another vitriolic attack on Ahmad based explicitly on her religion, check out this post at The Conservative Treehouse.)  If you questioned Ahmad's story, and would not have questioned the story of our hypothetical young Christian woman, you are making the judgment that a Muslim is more likely to lie than a Christian -- in effect, making a pronouncement about the ethics of 1.57 billion people, or 23% of the world's population.

Now, I'm not saying that I like Islam as an ideology.  I'm no apologist for religion in general, as regular readers of this blog know all too well.  I don't need to point out that there have been horrific things done by Muslims, in the name of Islam.  What I am saying is that to make an assumption that all billion-and-a-half Muslims in the world are equally kind, ethical, and compassionate, or equally dangerous, violent, and threatening, is patently ridiculous -- and worse, it's lazy thinking.

The same standard applies in politics.  Consider the response by Fox News regarding allegations that former Speaker of the House Dennis Hastert had sexual contact with a male student while he was a high school teacher.  Knowing nothing more than what's been released about the case, Fox has already cast Hastert as the victim.

Commentator Brit Hume said on Sunday, "There’s, evidently, a blackmailer, extortionist… and all indications seem to be no charges will be brought against the person who was blackmailing the former speaker."  And if that wasn't enough, Geraldo Rivera spoke up with a similar view, when he tweeted, "Sex misconduct from yrs ago was gross but Speaker Hastert is now a victim who should be given pass in exchange for testimony vs blackmailer."

But let's do the little flip-around again.  Suppose that the allegations of homosexual contact with a minor had been levied against a prominent liberal Democrat.  What do you think Fox News's response would have been?

Makes it clearer, doesn't it?

As I said in the beginning, it's not like we all don't jump to unwarranted conclusions sometimes.  But our willingness to stay there, not to consider the reason for our leap, is troubling.  The world is not a simple place, and people seldom do things for one single, unambiguous reason.  Deciding that a woman claiming discriminatory treatment is lying solely because she's a Muslim, and that Dennis Hastert is an innocent victim of blackmail solely because he's a prominent Republican, is not only biased, it's simplistic foolishness.

And to accept those conclusions without examining them is the epitome of intellectual and ethical laziness.
Posted by Gordon Bonnet at 2:53 AM