Borley Rectory, and the problem with anecdote

There's a reason skeptics have a problem with anecdotal evidence and eyewitness testimony.

It's not that that it's impossible that you saw a ghost, or Bigfoot, or an extraterrestrial spacecraft.  What we're saying is that we need more than your assurance that you did.  Not only do we have the potential for outright lies and hoaxes -- some of them very subtle and clever -- we have the fact that the human sensory apparatus more or less sucks.

To put not too fine a point on it.

I mean, it works well enough.  It keeps us sufficiently aware of our surroundings to stay alive.  But we're easily tricked, we miss things, we misinterpret what we see and hear.  As astronomer Neil deGrasse Tyson put it, "The human perceptual system is rife with all sorts of ways of getting it wrong."

As an illustration, let's consider one of the most famous "haunted house" stories in the world -- the infamous Borley Rectory, of Borley, Essex, England.

Borley Rectory always shows up on those websites with names like, "Ten Most Terrifying Real Ghost Stories!", usually somewhere near the top of the list.  So here are the bare bones of the story, just in case you don't know it.

Borley Rectory was built in 1862 by Reverend Henry Dawson Ellis Bull, Rector of Borley Parish.  He designed the building to replace an earlier rectory that had burned down in 1841, and also to accommodate his wife and family of fourteen children, which indicates that Reverend Bull put a lot of stock in the "be fruitful and multiply" thing from the Book of Genesis.

Be that as it may, the parish was certainly steeped in history.  The parish church is thought to date to the 12th century, and the town was the site of Borley Hall, the ancestral seat of the Waldegrave family.  But here's where truth starts twisting in with fabrication; because the additional claim that the rectory had been built on the site of an old Benedictine monastery appears to have no basis in reality.

Which means that the tale that is the basis of the haunting also is of dubious provenance.  Because the story goes that a monk in the (almost certainly non-existent) monastery was having an affair with a nun from a nearby convent.  They made plans to elope, and had in fact arranged a coach driven by a friend of the monk's in order to get away, but the plan was discovered.

Sexual indiscretion by the clergy was a major no-no back then.  The coachman was beheaded, the monk hanged, and the nun bricked up in a wall inside the convent.

Except... none of them existed, remember?  Because there's no evidence there ever was a monastery on the rectory grounds.

But that didn't stop the tale from growing.  Here's one account of what Reverend Bull et al. saw:


On July 28th, 1900, three Bull daughters reportedly saw a figure on a path, which later became known as the "Nuns Walk", to the rear of the rectory. They were joined by a fourth sister to help greet the stranger, but the apparition disappeared. Harry also told of seeing the nun, together with the phantom coach in which she had eloped.

She was also seen wandering the grounds around the Rectory, in and out of the bushes, dressed in grey. There are reports of the Monk and Nun passing across the grounds. Several people said they observed "A lady in grey cloak" and "A gentleman with a sort of bald head, dressed in a long black gown."

Once the story of the haunting began to spread, others reported seeing spectral nuns and monks.  But that's not all.  A later rector of the parish, one Lionel Foyster, moved in in 1930 with his wife Marianne, and they began to experience poltergeist activity in addition to the continuing presence of ghostly figures loping about.  Marianne began to receive messages written on walls and scraps of paper, such as the following: 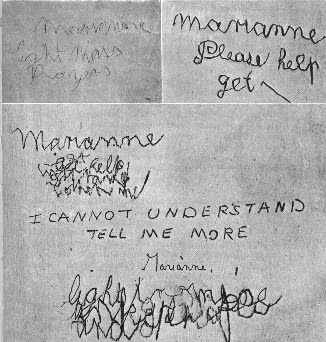 Both of the Foysters reported having peculiar experiences:


During the first year of their tenancy, Lionel described many unexplained happenings including; bell ringing, the appearance of Harry Bull [son of the first rector of Borley], glass objects appearing out of nowhere and being dashed to the floor, books appearing, and many items being thrown, including pebbles and an iron. After an attempt at exorcism, Marianne was thrown out of bed several times.

The Foysters eventually moved out, apparently because of Lionel Foyster's declining health, and afterwards no one could be found who was willing to live in the rectory, almost certainly because of its reputation.

And then Harry Price got involved.

Price was a psychic investigator of significant fame, who had founded the National Laboratory of Psychic Research as a rival to the more reputable Society for Psychical Research.  Price himself was a strange mixture of skeptic and sketchy.  He was instrumental in unmasking outright hoaxers such as Helen Duncan, who used cheesecloth and paper soaked in egg white to simulate "ectoplasm."  But his investigation of Borley Rectory, leading to the publication of a book by Price in 1940, was unequivocally in support of its having been haunted -- despite a stinging critique by researchers for the SPR who said that Price himself was a trained conjuror (which was true), and had "salted the mine" by faking some of the evidence from Borley, in collusion with Marianne Foyster, who "was actively engaged in fraudulently creating [haunted] phenomena."

Price, of course, denied any such thing, but further inquiries by the SPR left his role in the alleged haunting in serious question.  And the matter came to an unexpected close when the rectory burned in 1939 because of an accident with an oil lamp.

The remnants of the building were demolished in 1944.  But people still visit the site, and the adjacent cemetery, and still report ghostly appearances, lo unto this very day.

See what I mean about anecdote?  We have a story that started out with a most-likely-false claim of three executions on the rectory grounds, followed by what many believe was an outright hoax perpetrated by Harry Price and Marianne Foyster.  Blend that together with overactive imaginations, and the rather dubious quality of the human perceptual systems, and you have a mishmash out of which any kernel of truth -- if there is one there -- becomes impossible to discern.

So is Borley haunted?  The most honest answer is "there's no way to know for sure," with a strong corollary of "... but probably not."  There's nothing here that any unbiased individual would consider hard evidence, just tall tale piled upon unsubstantiated claim, mixed with "I heard that people saw ghosts there."

If this is "one of the best-authenticated haunted sites in Britain," as one website claimed, we've got some serious problems.

To return to my initial point, it's not that I'm saying that any of the claims of the paranormal are impossible.  What I'm saying is that thus far, no evidence I've seen has been convincing, at least not to someone who wasn't already convinced.  But despite all that, I'm hoping to visit Borley this summer.  My wife and I are spending two weeks in England in August, and I'm going to try to convince my wife to pop in to say hi to the spectral monks and nuns.  I'll definitely report back with anything we happen to see.

Not that it should make a difference.  Because eyewitness testimony is still subject to all of the caveats I've mentioned -- even if it comes from yours truly.

Posted by Gordon Bonnet at 3:14 AM