Today I am off to the wedding of one of my oldest and dearest friends (and long-standing partner-in-crime), who is finally able to marry her sweetheart because same-sex marriage recently became legal in the state of Florida.  Their happy day is a tribute to the hard work of people who have worked tirelessly to make sure that love receives official recognition -- regardless of the genders of the people involved. 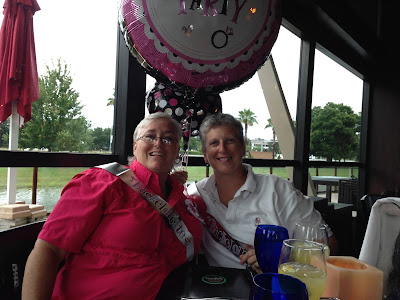 But of course, such a sea change in attitudes, not to mention laws, is not going to be met with universal support.  Just as alterations in our culture regarding women's rights and racial equality did not occur rapidly (and you might add, with complete accuracy, that they still haven't changed as much as they need to), our stance toward LGBT individuals still has a tremendously long way to go.

And such objections haven't just come from loudmouthed bigots such as Pat Robertson, Franklin Graham, and Mike Huckabee.  Ordinary folks have decided for some reason to make this issue their cause célèbre.  Take, for example, the couple in Australia who are threatening to divorce if same-sex marriage is legalized.

Nick and Sarah Jensen, whose statement got them their fifteen minutes of fame on the cover of the Canberra City News, made a fairly unequivocal statement regarding their beliefs:


My wife and I just celebrated our 10-year anniversary. But later this year, we may be getting a divorce.

The decision to divorce is not one we’ve taken lightly.  And certainly, it’s not one that many will readily understand.  And that’s because it’s not a traditional divorce.

Our view is that marriage is a fundamental order of creation.  Part of God’s human history.  Marriage is the union of a man and a woman before a community in the sight of God.  And marriage of any couple is important to God regardless of whether that couple recognises God’s involvement or authority in it.

If our federal parliament votes to change the timeless and organic definition of marriage later on this year, it will have moved against the fundamental and foundational building block of Australian society and, indeed, human culture everywhere.

Indeed, it raises a red flag when a government decides it is not content only having sovereignty over land, taxes and the military — but ‘words’ themselves.

This is why we are willing to divorce.  By changing the definition of marriage, ‘marriage’ will, in years to come, have an altogether different sense and purpose.

And if Australia does legalize same-sex marriage, and the Jensens do go through with their divorce, my guess is that the response by the public will be:

Because you know what?  No one gets to step in and tell the Jensens what they are allowed to do regarding their own marriage.  That's not what LGBT people want to do to the Jensens; it's what the Jensens want to do LGBT people.  It is, in fact, kind of the whole point.  If two consenting adults want to marry -- regardless of who they are -- they should be allowed to.  If they want to divorce -- for whatever reason -- they should be allowed to.  No one should have the right to limit two adults' public expression, and recognition, of love, except the two adults themselves.

It's also a little funny that the Jensens are objecting to someone changing the "timeless and organic definition of marriage" as it comes from the bible, when the various biblical laws regarding marriage weren't exactly what most people come up with when they think of "traditional marriage."  To quote an op-ed piece by biblical scholars Robert Cargill, Hector Avalos, and Kenneth Atkinson that appeared in the Altoona Herald:


In fact, there were a variety of unions and family configurations that were permissible in the cultures that produced the Bible, and these ranged from monogamy (Titus 1:6) to those where rape victims were forced to marry their rapist (Deuteronomy 22:28-29) and to those Levirate marriage commands obligating a man to marry his brother’s widow regardless of the living brother’s marital status(Deuteronomy 25:5-10; Genesis 38; Ruth 2-4).  Others insisted that celibacy was the preferred option (1 Corinthians 7:8; 28)...  In fact, during a discussion of marriage in Matthew 19:12, Jesus even encourages those who can to castrate themselves “for the kingdom” and live a life of celibacy... [And] Ezra 10:2-11 forbids interracial marriage and orders those people of God who already had foreign wives to divorce them immediately.

So not only are the Jensens objecting on biblical grounds to something that isn't even clearly defined in the bible itself, inadvertently, what the Jensens are doing is highlighting exactly the reason why same-sex marriage needs to be legalized.  The Jensens' choice to divorce only exists because they already have a right that is being denied to others.  And giving LGBT individuals the right to marry no more alters the Jensens' marriage than giving African Americans the right to vote altered the voting rights of privileged whites.

But enough of the negative stuff.  Today is for celebrating the small steps.  And to my two dear friends Wendy and Renee, I wish love, prosperity, and a long and happy marriage. 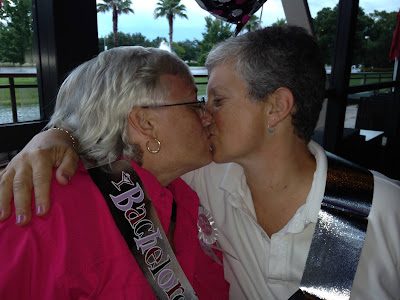 Posted by Gordon Bonnet at 4:37 AM