I'm sure that most of you know by now that in a landmark 5-4 decision, the United States Supreme Court made same-sex marriage legal across the nation.

When I got up this morning, I noticed a few things that bear mention.

I find the last-mentioned especially amusing, given that Canada legalized same-sex marriage in 2005.  If you people are looking for a place to move, a country where religion trumps the rule of law, homosexuality is a punishable offense, and everyone is expected to run their lives by the precepts of a holy book, I think Syria or Iraq might fit the bill better than Canada. 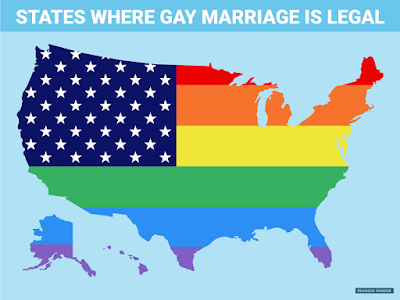 What gets me most about all of these people is that they're not just content to live their lives by their own religious precepts; they expect everyone else to follow those precepts, too.  Not satisfied with simply practicing their own religion to the best of their ability, they demand that the entire country has to do so as well.

It's not that hard.  If you want to marry someone of the same gender, do so.  If you don't, then don't.

Or would be, except for the likes of Glenn Beck, who thinks that giving people rights they've been denied amounts to persecuting everyone else.  Beck, who really needs to up the dosage on his anti-psychotic meds, had the following to say:


Persecution is coming. If this goes through, persecution is coming.  I mean serious prosecution.  Mark my words. …  If gay marriage goes through the Supreme Court and gay marriage becomes fine and they can put teeth in it, so now they can go after the churches, 50 percent of our churches will fall away, meaning the congregations.  Within five years, the congregations, 50 percent of the congregants will fall away from their church because they won’t be able to take the persecution.

Further, he says that there are tens of thousands of ministers who are going to face martyrdom because of the decision:


The number in the Black Robe Regiment [a group of conservative Christians Beck likes to talk about] is about 70,000 now.  The number that I think will walk through a wall of fire, you know, and possible death, is anywhere between 17,000 and 10,000.  That is an extraordinary number of people that are willing to lay it all down on the table and willing to go to jail or go to death because they serve God and not man.

Because that's likely.  I think the Black Robe Regiment is going to be pretty frustrated over the next few months, wandering around looking in vain for someone to kill them:

Guy at wedding reception (puzzled):  "Why would I do that?  This is a celebration.  Here, have some cake."

Black Robe dude (triumphantly):  "I thought so.  This cake is poisoned, isn't it?"

Black Robe dude:  "So you're not going to murder me for my beliefs?"

Beck, of course, wasn't the only one.  Franklin Graham, Billy Graham's less compassionate son, was grim yesterday evening.  "I pray God will spare America from His judgment," Graham said.  "Though, by our actions as a nation, we give Him less and less reason to do so."

Mike Huckabee, of course, was considerably more verbose in his reaction, not to mention considerably less coherent:


The Supreme Court has spoken with a very divided voice on something only the Supreme Being can do-redefine marriage.  I will not acquiesce to an imperial court any more than our Founders acquiesced to an imperial British monarch. We must resist and reject judicial tyranny, not retreat.

This ruling is not about marriage equality, it's about marriage redefinition.  This irrational, unconstitutional rejection of the expressed will of the people in over 30 states will prove to be one of the court's most disastrous decisions, and they have had many.  The only outcome worse than this flawed, failed decision would be for the President and Congress, two co-equal branches of government, to surrender in the face of this out-of-control act of unconstitutional, judicial tyranny.

The Supreme Court can no more repeal the laws of nature and nature's God on marriage than it can the law of gravity.  Under our Constitution, the court cannot write a law, even though some cowardly politicians will wave the white flag and accept it without realizing that they are failing their sworn duty to reject abuses from the court.  If accepted by Congress and this President, this decision will be a serious blow to religious liberty, which is the heart of the First Amendment.

Right.  Because that's what the Supreme Court is supposed to be doing; passing "god's law."

But no one was more butthurt than Justice Antonin Scalia, who said in his dissent, "Who ever thought that intimacy and spirituality [whatever that means] were freedoms?" he wrote.  "And if intimacy is, one would think that Freedom of Intimacy is abridged rather than expanded by marriage.  Ask the nearest hippie."

And the result was not what Scalia hoped, which was for people to sit up and amazement and say, "Good heavens, you're right!"  Instead, #AskTheNearestHippie has become a trending hashtag on Twitter, along with a brilliant new Twitter account to follow... @TheNearestHippie.

Because, Justice Scalia, mocking a ridiculous statement is a freedom.  It's called freedom of speech.

But despite all of this, the lion's share of the responses I saw yesterday were positive.  Facebook positively erupted in rainbows.  Even a conservative buddy of mine posted, "Let gays get married.  Let the rednecks have their guns.  Let atheists be atheists, and let Christians be Christians.  Because America is about freedom.  Freedom to live how you please, and be happy with your life.  So smoke a bowl, shoot your guns, cuss a lot, praise Jesus, and wish those two fellas next door a happy honeymoon."

To which I responded, "Amen, brother."

So there you are.  The law of the land.  And to my LGBT friends and their allies who have fought this battle for decades, I can only say: