Back in 2012, the spells-and-charms crowd got their knickers in a twist over a decision by eBay to discontinue the selling of "paranormal services."

Even skeptics gave the policy change a wry eye, because although they prohibited the sale of spell-casting, they continued to allow the sale of spell books, crystal balls, amulets, and so on.  So the whole thing had more to do with potential wrangling over the return policy than it did with critical thinking, or frankly, with reality.

And just this week, another company has followed suit, putting in place a different curious double standard.  Etsy has declared a change in policy that prohibits the sale of items with purported magical powers.  The policy states:


In general, services are not allowed to be listed or sold on Etsy. There are a few exceptions noted below that are allowed as they produce a new, tangible, physical item.... Any metaphysical service that promises or suggests it will effect a physical change (e.g., weight loss) or other outcome (e.g., love, revenge) is not allowed, even if it delivers a tangible item.

Already, purveyors of crystals and candles for spells have been told that they can't sell their magical wares.  And vendors of such stuff are pretty pissed off.  One wrote:


The entire point of buying stones/herbs/oils is for their metaphysical effects in my community!  If I can't list these correspondences, then why would any witch/pagan buy them from my shop?  Witches and Pagans want to buy stones from people with knowledge about their magickal properties.

Righty-o.  Magick.  Which is, of course, different from magic.  I'm sure you can hear the significance of that final "k." 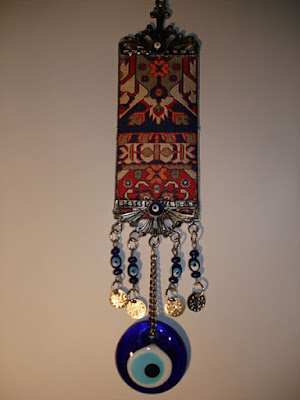 [image courtesy of photographer Thierry Baubet and the Wikimedia Commons]

Now, you may be wondering why a rationalist like myself isn't fist-pumping and saying "right on, Etsy!"  Seems like I'd be behind this 100%, doesn't it?  But I have to admit to some hesitation, because the new policy disallows goods that claim to have magical powers...

... while continuing to allow goods that claim to have Christian magical powers.

For example, take a look at the page for this St. Christopher medal, that can be yours for only $10, and which states the following:


This is a beautiful St. Christopher pendant that will look wonderful on your favorite necklace and will comfort you knowing that the Patron Saint of Safe Travels is taking care of your safety.  The medal measures 1" x 1" and reads "Saint Christopher Protect Us".  Backside is blank.  Chain is not included.

Okay, can someone explain to me how this is any different than selling an amethyst crystal whose quantum vibrational frequencies are supposed to bring you success in the romance department?  And making it clear that this wasn't just an oversight, consider what happened to one vendor of magic... um, magick:

They're also basically the same thing in the sense that neither one works.  But of course, adding that to the policy would put Etsy directly in the firing line of Fox News, who are always casting about for more ammunition for their "war on Christianity" trope that they flog every single night.  So you can understand why the Etsy Board of Directors are taking a pass on this one.

But even so, I'm finding myself in the awkward position of siding with the witches.  Until someone can show me how a rosary is any different from a magic wand, I find it hard to defend selling one and prohibiting the other on the basis of its being a "tangible object... suggest(ing) a physical change or other outcome."

Anyhow, if you're selling your mystical charms and potions via Etsy, you might want to think about moving to a different outlet.  Or, conversely, you could simply cast a spell on the Board of Directors and get them to change their policy.  That'd sure show them.
Posted by Gordon Bonnet at 2:57 AM