Something I find really peculiar is the selectiveness with which people apply the tenets of their own religion.

Take, for example, staunch Catholic and Republican presidential contender Rick Santorum, who last month opined that Pope Francis was out of his depth to speak on climate change:


He’s someone who is as committed to the nuclear family as I am.  I’m a huge fan of his and his focus on making sure that we have a healthier society.

I understand and I sympathize and I support completely the pope’s call for us to do more to create opportunities for people to be able to rise in society, and to care for the poor.  [But] the church has gotten it wrong a few times on science, and I think that we probably are better off leaving science to the scientists.

I think when we get involved with controversial political and scientific theories, then I think the church is probably not as forceful and credible.  And I’ve said this to the bishops many times when they get involved in agriculture policy or things like that, that are really outside of the scope of what the church’s main message is.

Some people have responded with comments like, "Don't you people think the pope is infallible?"  Now, even an atheist like myself knows that the official church policy is that the pope only invokes papal infallibility when he is "speaking ex cathedra;" in the words of Catholic Encyclopedia author P. J. Toner, "When, in the exercise of his office as shepherd and teacher of all Christians, in virtue of his supreme apostolic authority, he defines a doctrine concerning faith or morals to be held by the whole Church."  But shouldn't his word still carry weight, even when he's not claiming to be infallible?

I mean, he is the pope, right? 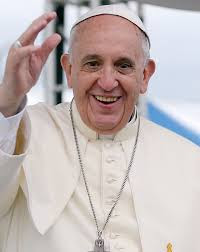 And as far as Santorum claiming that we should "leave science to the scientists" -- well, it's not like the politicians are scientists, either.  Hell, they don't even listen to the scientists.  So what it seems like is that the policy is "people speaking with authority should be believed as long as it's politically expedient and I already agreed with their position."

Even more striking are the comments this week from Catholic League President Bill Donohue, who said that Catholics don't have to follow the pope's call to environmental stewardship because God has no specific opinions thereof:

The pope has the authority to speak on matters of faith and morals. Once you get beyond that, can you speak to other issues?  Of course you can speak to other issue, but I don’t care whether it’s Pope Francis or his predecessors or his successors some day, once you get outside the domain of faith and morals, be careful.  Be careful and be careful particularly when you get into the weeds and get very specific.

The problem is, the more specific you get [on issues like climate change], Catholics will scratch their heads and say he's a very nice man.

His encyclical on climate change will come out later this month, and he's going to speak to the UN, so we'll see more at that time.  And Catholics will offer him respect, but in terms of accepting what he has to say as guiding their thoughts, no, it’s not going to happen.  We know, for example, that even on issues as the death penalty, for example, or on gun control or on helping the poor, there’s a lot of different issues where Catholics can disagree on.  When it comes to things that are non-negotiable -- I'll give you two quick ones, abortion and euthanasia -- it's not my opinion, it's in the catechism, it says that these are intrinsically evil.  No one has ever said that air pollution is intrinsically evil.  So, people need to get up to speed on this.

So, basically, god is vehemently against the killing of one person at a time, but has no problem with the killing of lots of people at the same time -- such as in Beijing, where the estimates are that over 400,000 people die yearly from the effects of air pollution?

Of course, that's not the only place where the "word of god" kind of misses the boat.  Interesting how there are all sorts of commandments about worshiping god, and honoring your mother and father, and all that sort of thing, but never once does the bible say, "Slavery is bad.  It's immoral to claim that you own another human being."  No prohibitions against rape, either.  No, we're just given rules regarding how badly we can beat our slaves (Exodus 21:20-21) and rules requiring a rapist to marry his victim "and never divorce her as long as he lives" (Deuteronomy 22:28-29).

What Donohue and his ilk are doing is the usual; cherry-picking what they like from the bible and the catechism and the pope's declarations, and ignoring the rest.  So once again, what it sounds like is that we have someone who's making god in his own image.  Abortion and euthanasia -- which, allow me to point out, weren't mentioned in the bible, either -- are "non-negotiable," but the pope's commentary on climate change is nothing more than the musings of "a very nice man."  So take your own opinions and political biases and put those in the mouth of god, and dismiss anything else.

The whole thing reminds me of a joke my dad used to tell.  A fire-and-brimstone preacher was intoning to his congregation a litany of the evils they needed to avoid in order to escape being sent to hell.  Old Mrs. Jones, sitting in the front pew, was listening with rapt attention and great appreciation.

"And who can argue," the preacher thundered, "about the evils of strong drink?  Liquor is the devil's own brew!  Every sip scorching its way down your throat should remind you of the hellfire waiting for you!"  And Mrs. Jones took a pinch of snuff, and said, "Aaaaaaamen, Brother!"

"And immorality of the flesh!" the preacher continued.  "Fornicating and thinking lustful thoughts may make you burn inside, but that is nothing to the burning your body will experience in the fiery furnace!"  And Mrs. Jones took a pinch of snuff, and again said, "Aaaaaaamen!"

"And evil rock music, all that hootin' and hollerin' and chantin' of unholy words!  You must close your ears, brothers and sisters!"  Another pinch of snuff for Mrs. Jones, and a rolling, "Aaaaaamen!"

Then the preacher said, "And the horrors of the use of that evil weed, straight from the pits of hell... the evil scourge of tobacco..."

And Mrs. Jones said, "Wouldn't you know it?  He's stopped preachin' and started meddlin.'"
Posted by Gordon Bonnet at 2:39 AM