Message for you, sir!

It's an occupational hazard as a blogger that occasionally you get hate mail. 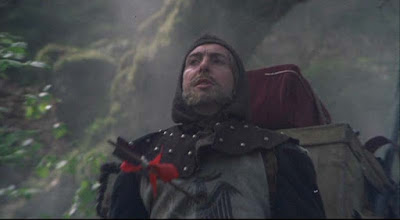 I was thinking about this because I got not one but two emails yesterday informing me that I'm going to hell.  I suppose that's natural enough, too, given my criticisms of religion, but two in one day did seem a bit much.  The first one was succinct enough -- it was in response to a post from earlier this year, in which I described a guy's claims that Bigfoot and the Loch Ness Monster et al. were signs of the End Times, as hath been prophesied by the scriptures.  Here's what I was told, regarding that post:


Scoffers will come in the last days, walking according to their own lusts, and saying, "Where is the promise of His coming?"  For since the fathers fell asleep, all things continue as they were from the beginning of creation. (2 Peter 3: 3-4)

To be fair, the person who made the comment is the guy who is made the original claim about El Chupacabra being mentioned in the Book of Revelation, so it's understandable that he'd more or less tell me to fuck off.  But it is the first time in my life that anyone has accused me of walking lustfully.

The second was more detailed, if only marginally more coherent, and was in response to a post I did two years ago about the "Quwave Defender," a device that costs hundreds of dollars and is supposed to protect you from "psychotronic manipulation" by the government.  I know from experience that the conspiracy theorists tend to be even touchier than the religious folks, so when you combine the two you get a mixture that makes nitroglycerin look like KoolAid.  Here's what the commenter told me about my opinions apropos of the Quwave Defender:


If someone such as Mr. Skepticism comes "just happens" to come across a site like Quwave and doesn't bother to research Targeted Individual harassment, etc., obviously the writer is guilty of the crime and spreading disinformation.  Entering the phrase, "targeted individuals in the usa" returns 54 million !!! results.  The overwhelming amount of information that is out there on this atrocity is incomprehensible in light of the fact the Mr. Skepticism and his partners in crime continue to get away with their sinister motives.  Don't worry, Mr. Skepticism, your crime ring will reign free....for a while.  Eventually it will fall like a house of cards, you can count on it. Then you will be homeless, hungy [sic], jobless, friendless, and dying...like all your victims.  Then you get to go to hell and be tortured far more terrifying and obscene than what all of you did to innocent victims in your lifetime.

So she sure told me.  It does cross my mind, however, that saying you get "54 million results" from a Google search is no indicator of whether what you're searching for makes sense.  Just for fun, I did a Google search for "magic alien weasel," and got 618,000 hits, which is considerably smaller than 54 million, but still pretty impressive for something that doesn't, technically, exist.  It also netted the following photograph: 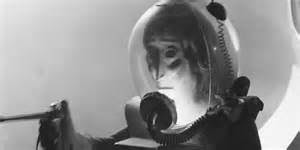 So I was curious, in that game of free-association way that internet searches frequently exhibit, to find out where the photo came from.  Turns out it's from a movie I'd never heard of called The Man from Planet X, a 60s-era B-grade science fiction flick which sounds pretty amazing.  But better yet, the search turned up the photo because it had been used in a blog called A Writer's Universe, which at a glance looks absolutely wonderful -- a blend of science and fiction and musings about the universe, and you should all definitely check it out.

So a piece of hate mail threatening me with hellfire led me to a cool blog that I certainly will be coming back to.  One of those weird silver-lining things.

One of the funny things about blogging, and hate mail, is that I never know which posts are going to generate the most vitriolic responses.  Sometimes I'll post something pretty brutal, and when I hit "Publish" I think, "Man, I'm going to get blasted to smithereens over this one."  And... nothing.  Then I'll post something that seems so gentle and conciliatory that I won't give it a second thought, and...

This happened just this week with my piece called "Bias Testing," in which I tried to strike a cautionary note and suggest that we all (myself included) need to keep our biases in mind when we react to a news story.  The news story I used as an illustration had to do with a Muslim woman, Tahera Ahmad, who was allegedly denied an unopened can of soda on an airplane, ostensibly because she was wearing a headscarf.  I even said explicitly that we only had Ahmad's side of the story, and that the airline was investigating the incident, but I was still lambasted repeatedly for being (1) a bleeding-heart left-winger who fell for Ahmad's obviously bogus story only because I suffer from white liberal guilt, and (2) a bigoted America-first racist because I mentioned that I didn't like Islam as an ideology, and therefore am complicit in the humiliation Ahmad experienced.

Well, make up your mind.  You can see as how I can't be both at the same time.  But that'll teach me to try to steer a middle course between two extreme (and, allow me to add, biased) views; you end up hitting the rocks no matter what.

So that's today's visit to the mailbox.  I've grown a thick enough skin after five years of blogging that most of the time, these missives don't cause me any more than a momentary bother, but it's still interesting to see what prompts people to respond.  And at least they're delivered via email.  Because even if it wasn't a Mortal Wound, I'd rather not follow in Fair Concord's footsteps and catch an arrow to the chest.