I try my hardest -- in fact, you might think of this blog as a five-year experiment in parsing how people think.  And sometimes, I think I've got it, that I have Homo sapiens pretty much figured out,

But then, something will happen, and I'm back to wondering if I might not be some kind of changeling.  Because a lot of the stuff people do is just flat-out weird.

Let's start with an incident that happened on May 30 in the Malaysian province of Sabah.  Some tourists, who appear to have been from Canada and various European countries, had climbed with a guide to the top of Mount Kinabalu.  And once they got to the top, they decided to take off all their clothes for a naked group-shot.

Now, so far, I have nothing particular to criticize here.  When the weather gets hot, I tend to wear the legally-prescribed minimum amount of clothing, and back in my reckless 20s I would have been an odds-on contender for the Olympic Co-ed Skinnydipping Team.  That said, it bears reminding that we're talking Malaysia here, a country known for its conservative attitudes toward showing skin.  When I was in Malaysia two summers ago, I noticed some scantily-clad tourists in Taman Negara National Park getting the stink-eye from the locals, so I decided to keep my shirt on -- despite the fact that it was 95 F and so humid that you could just about drink the air.  I probably would have gotten away with it, but I figured that I had no special need to offend local custom, so I did what the natives did and kept all my clothes on.

But Mount Kinabalu is remote, and the only ones up there at the time were the guides and the tourists, so the ten tourists stripped down to the skin.  One of the guides objected, and he was told to "go to hell."

That would have been that, except for the fact that five days later there was an earthquake near Mount Kinabalu that killed eleven people.  And you guessed it -- a local government official has said that the earthquake was due to the naked tourists having offended the mountain.

The Deputy Chief Minister of Sabah, Tan Sri Joseph Pairin Kitingan, said, "To me, when something like this happens, it is a clear connection of the incident to the earthquake that has brought about so much damage and loss of lives...  There is almost certainly a connection.  We have to take this as a reminder that local beliefs and customs are not to be disrespected...  It is a sacred mountain and you cannot take it lightly."

Right.  Because earthquakes have nothing to do with plate tectonics, or anything.  They are caused by naked people.  Which makes you wonder how the most powerful earthquake ever recorded in North America, the Anchorage earthquake of March 1964, happened, because I find it highly unlikely that there were many naked people outside in Alaska in March.

But anyway, Deputy Chief Minister Kitingan said he vowed to have the tourists brought to justice, and was trying to find ways to prevent them from leaving Sabah.  And to further illustrate how serious he was, he mentioned that he'd known something bad was going to happen that day, because he and his wife saw a flock of swallows that morning.

"At first I didn’t think anything of it, but after it went on for more than half an hour I knew something was not well," Kitingan said.  "I brought it up with my wife and we both agreed that something bad was going to happen."

So we have the beginnings of a scientific formula here, something like "swallows + naked people = bad."

But the story's not over yet.  Because in another weird filigree, one of the tourists, Canadian Emil Kaminski, decided to post one of the photos on his Facebook page.  Here's a screengrab, with the naughty bits blurred out in case (1) Deputy Chief Minister Kitingan reads this blog, or (2) the upstate New York hill gods are considering having an earthquake, or (3) there are any suspicious-looking flocks of swallows near my house: 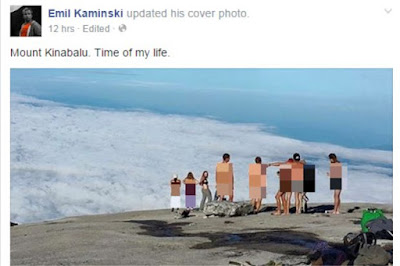 Kaminski added, "It is not based in logic, but superstition.  I utterly do not care for superstition.  If local religion prohibits certain actions, then local believers of that religion should not engage in it, but they cannot expect everyone to obey their archaic and idiotic rules."

When someone responded that Kaminski and the others should respect local culture, he responded, "Fuck your culture."

Which is an attitude I can't really get behind.  I mean, I like being naked as much as the next guy, but if you go to another country, deliberately setting out to give offense seems like bad policy.

On the other hand, I have to agree with Kaminski that the Deputy Chief Minister's statement is patently ridiculous.  When I read what Kitingan had to say, I said, "What century are we in, again?"  But then I remembered what Glenn Beck said last week -- that the torrential downpours in Texas were due to Governor Rick Perry's request that the devout pray that god end the devastating drought that the state had been suffering through.  And really, how is that any more sensible than what Kitingan said?

If the Texas storms were god's will, though, you have to wonder what kind of twisted sense of humor the guy has.  Because the rains and subsequent flooding have caused millions of dollars in damage, and killed at least 23 people.  "You want the drought to end?" god seems to have said, grinning in a nasty sort of way.  "I'll end your drought for you."

Be that as it may, I don't see the difference between Deputy Chief Minister Kitingan's claim that a bunch of tourists taking off their clothes on a mountain top caused an earthquake, and Glenn Beck's claim that a bunch of people praying caused a catastrophic flood.  What's next?  Major world figures deciding that thunder is caused by Zeus and Hera having a bowling tournament?

Oh, and in unrelated developments: senior Islamic clerics working with ISIS in Syria and Iraq have outlawed pigeon breeding as a hobby because "the sight of the birds' genitals as they fly overhead is offensive to Islam."  Violators of the ban will be fined and publicly flogged.

All of which returns me to my initial point, which is that I don't really understand people at all.  Because if the members of my species really think it's logical to think that naked people cause earthquakes, and naked birds are offensive, then I'm back to wondering if I might be some sort of changeling.
Posted by Gordon Bonnet at 2:52 AM