The time has come to ask what exactly the people in charge of overseeing public education are trying to accomplish.

And I'm sorry, "Improving public education" isn't a good enough answer.  Nor is "making sure we have teacher accountability."  I want to know, specifically, why our elected officials and educational leaders are moving in the direction they are, along with evidence of how their decisions will work to accomplish their goals.

Because at the moment, a lot of it looks like a carefully-designed program to tear down the entire edifice. 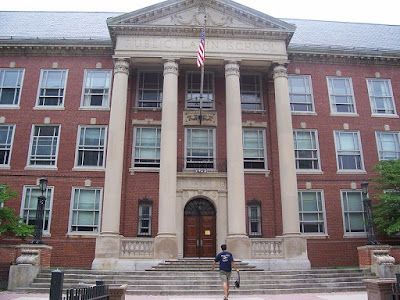 [image courtesy of photographer Svetlana Miljkovic and the Wikimedia Commons]

Here are a couple of the latest salvos.  So let me tell you about those, and see if you agree with me.

Let's start, as so many attacks on education do, in the state of Texas, where Governor Greg Abbott has appointed Donna Bahorich as the chairperson of the State Board of Education.

Bahorich is an ultraconservative who backed last year's decision to approve history texts that claimed that the United States Constitution is based on the bible, and that the American system of democracy was inspired by Moses.  She is strongly in favor of using money from taxpayers to support private religious schools.  Her qualifications?  She was a manager of a telephone company, campaign treasurer for Senator Dan Patrick (who himself has gone on record as stating that creationism should be taught in public schools), and a member of the pastor's council at Houston's Vineyard Church.  Her M.A. is in counseling from Jerry Falwell's fundamentalist bastion, Liberty University.

She chose to homeschool her own children.

So to summarize: Texas now has a woman in charge of their educational system who has never taught, did not send her own children to public school, seems to have no qualifications for the position whatsoever, and has shown herself to be an ideologue who would love to see free secular public education replaced by publicly-funded religious schools.

Even some of Abbott's Republican supporters think this is a misstep.  State Board member Thomas Ratliff said, "Public school isn’t for everybody, but when 94 percent of our students in Texas attend public schools I think it ought to be a baseline requirement that the chair of the State Board of Education have at least some experience in that realm, as a parent, teacher, something."

Yeah.  You'd think so.  But Texas isn't the only one.  Right here in my home state of New York, we have Merryl Tisch as chancellor of the State Department of Education, a woman whose sole experience with teaching was seven years in two wealthy private Jewish schools.

Then, we have the ongoing attacks on teachers via the reliance on standardized tests to measure not only student progress, but teacher competence.  So given how much is resting on the outcome of those tests, you'd think that there'd be a great deal of emphasis on having qualified scorers, right?

But according to an exposé in The New York Times, the high-stakes exams from Pearson Education and other testing-for-profit corporations are being graded by people who not only have no teaching experience, but no background in pedagogy whatsoever:


There was a onetime wedding planner, a retired medical technologist and a former Pearson saleswoman with a master’s degree in marital counseling.  To get the job, like other scorers nationwide, they needed a four-year college degree with relevant coursework, but no teaching experience.  They earned $12 to $14 an hour, with the possibility of small bonuses if they hit daily quality and volume targets.

Bob Sanders, vice president for Content and Scoring Management at Pearson, said that none of that mattered.  "From the standpoint of comparing us to a Starbucks or McDonald’s, where you go into those places you know exactly what you’re going to get.  McDonald’s has a process in place to make sure they put two patties on that Big Mac.  We do that exact same thing. We have processes to oversee our processes, and to make sure they are being followed."

You know, Mr. Sanders, if you're trying to make an argument that you're dedicated to quality, comparing yourself to McDonalds might not be your best choice.

And then, we've got the more fundamental problem that the evaluation system itself is faulty.  Let's take my own situation as a case-in-point, because I just got my "final grade" for this school year yesterday.  The numerical grading system in New York has been in place for three years.  Two years ago, I scored a 92.  Last year, I scored a 91, missing the "highly effective" designation by one point.

So according to New York State, I became 11% worse at teaching between last year and this one.  Good thing I didn't drop more than that; another 5% downward, and I'll be classified as "Developing," which is kind of funny given that I've taught for 28 years.  If I haven't "Developed" by now, I don't think it's gonna happen.

And the tailspin in my score is, of course, being laid at my feet, because there can't be any other contributing causes, right?  It couldn't be because of things like differences in student effort and work ethic from year to year, changes in the exam scaling, or the fact that 50% of one of the classes I was evaluated on this year were special needs students, including two tenth-graders who read at a fourth-grade level.

Nope, the drop in scores was clearly my fault.

What the hell is going on here?

Elected officials are appointing people to leadership roles in education who have little to no experience in public education.  A teacher evaluation system has been put in place that is not only so faulty that a student in a freshman statistics class could see the flaws, but has been handed over to for-profit corporations who farm out the actual scoring to people who have never spent a day working in a classroom.

You know, I don't tend to buy into conspiracy theories, but this is more and more looking like a well thought out strategy to destroy public education from the ground up.

I hope I'm wrong.  Incompetence and mismanagement are easier to forgive than deliberate, calculated malfeasance.  But as the problems pile up, and the solutions appear designed to make things worse, and the people appointed to be in charge continue to be selected from the ranks of anti-education demagoguery, my confidence that we're not seeing some kind of coordinated attack is becoming weaker and weaker.
Posted by Gordon Bonnet at 2:54 AM