Sometimes I wish that if people want to espouse crazy worldviews, they'd jump right in and do it, and not claim that there's a logical argument and evidence that supports it.

I mean, just go for it, okay?  No half-assed looniness, here.  If you believe that the universe was created by a Giant Glow-In-The-Dark Bunny from the Andromeda Galaxy, then believe it.  Don't try and convince us by claiming that the DNA fingerprint of rabbits matches the spectral lines of the stars in the Andromeda Galaxy.  Because then you've crossed the line from Interesting Woo-Woo to making yourself look ridiculous.

Which is something that someone should explain to Eric Dubay, a blogger whose "About Me" states that he is a 32-year-old American who lives in Thailand, teaches yoga and wing chun part time, and is a full-time exposer of the New World Order.  Because Dubay, who predictably enough thinks that the United States is being run by a cadre of Illuminati, has put together an argument for his views using genealogy.

Dubay says that every American president has royal blood.  34 descend from Charlemagne, and 19 from King Edward III of England.  This can't be a coincidence:


If America declared its Independence from the European monarchies in 1776, how is it possible that every single president has descended from European monarchs?  If presidents are democratically elected as we are told, what are the odds that we would always choose members of British and French royal bloodlines to lead us?

The whole thing is one big conspiracy to keep the aristocracy in power, Dubay says:


Researchers like David Icke, Michael Tsarion, and Fritz Springmeier, along with foundations like the New England Historical Genealogy Society, Burkes [sic] Peerage, the Roman Piso Homepage, and other reliable genealogical sources have documented these royal presidential bloodlines.  Actually, by branching out far enough on the presidential family tree, the dedicated researcher will find that all 44 presidents share kinship, belonging to the same general ancestry, often called the 13th Illuminati bloodline, the Merovingian line, and/or the Windsor-Bush bloodline.

The fact that he goes to David Icke as a source should put you on notice right there.  And he goes on to say that not only have the elected presidents all been cousins, so are the people they ran against.  So we'd have elected members of The Family even had the other candidate won.  As an example, he says that George W. Bush and his opponent, John Kerry, are...

Let's throw in a few other inconvenient facts.  If all two presidents share is descent from Charlemagne, that pushes back their common ancestry to about 1,200 years ago.  Meaning that Charlemagne and whichever of his various wives and mistresses were involved were the pair's mutual 40-times-great grandparents.

Besides just being ridiculous, which is problematic enough, there's another major flaw in Dubay's argument -- and that is that just about everyone with ancestry in Western Europe is likely to be descended from Charlemagne.  Charlemagne, when he wasn't ruling the Holy Roman Empire, seems to have spent a lot of his time doing one other thing, if you get my drift.  So if you're of western European descent, congratulations -- you have royal blood.

The difficulty is that you're also descended from most of the rest of Europe at the time, including the peasants.  The total population of Europe in the 8th century was about 30 million, give or take; but consider that from a purely mathematical standpoint, if you trace your family tree back that far, doubling at each generation, you would have 2 raised to the 40th power ancestors -- or about 1.1 trillion people.

This means that at that point, you (1) are descended from lots of people multiple times, (2) are probably descended from every single individual who left descendants, and (3) are related to every single person currently alive who has European ancestry.

Let me put this in a personal way.  I'm a descendant of Charlemagne at least twice, through my descent on my dad's side from the Lyell family (landed Scottish gentry, although they certainly didn't have much money to speak of by the time they got to the United States) and on my mom's side from the de la Tour family (petty French nobility, whose scion kind of blew his reputation by going to Nova Scotia and marrying a Native American).  So is my wife, who not only descends from Charlemagne, but from the aforementioned King Edward III of England (through her descent from the Hylton family, including the "Mad Baron Hylton," about whom I should tell you some time).

So yes... my wife and I are distant cousins.  Maybe one of us should run for president. 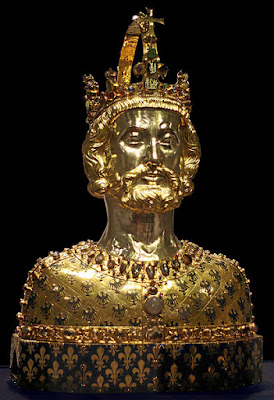 I see a resemblance, don't you?  [image courtesy of the Wikimedia Commons]

So sorry, Mr. Dubay, but there's no conspiracy going on here, unless you count the fact that every president thus far has had at least some western European ancestry.  Until we elect a president who is of 100% Chinese descent, we're pretty much stuck with Charlemagne's progeny.

And of course, it still doesn't matter, because anyone of Chinese descent almost certainly has Genghis Khan as an ancestor, because old Genghis proved pretty conclusively that you can make love and war more or less simultaneously.

So that's that.  And now I'm going to go get some breakfast, and figure out how many people my wife would have to bump off in the line of succession before she could become Queen of England.  I wouldn't mind spending the rest of my life as Prince Consort.  Seems like a good gig.
Posted by Gordon Bonnet at 2:52 AM