There's a time for politicizing, for spin, and for debate.  There might even be a time for grandstanding.

But sometimes, all a moral and compassionate person needs to do is stand in solidarity with people who have experienced a great loss.  And that is where we should be, as a nation, with respect to the senseless tragedy that happened two days ago in Charleston, South Carolina, where a 21-year-old man murdered nine people at the Emanuel African Methodist Episcopal Church, apparently motivated by racism, hate, and the ideology of white supremacy.  "I'm here to shoot black people," the killer allegedly said.  "You've raped our women, and you are taking over the country...  I have to do what I have to do." 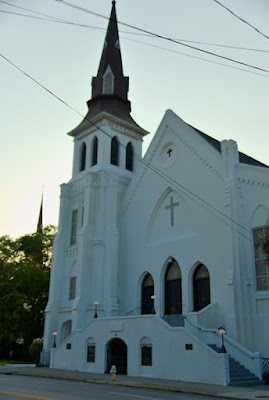 The Emanuel AME Church [image courtesy of the Wikimedia Commons]

Horrific, and hard to imagine that in the 21st century, we're still seeing such crimes occur, that racism is still an entrenched part of our society.  Those are the discussions we should be having today.

But not, apparently, if you work for Fox News.

The pundits over at Fox wasted no time in trotting out their "War on Christians" trope that they've been flogging for years, every time anything happens that threatens the unchallenged hegemony that Christianity has had in the United States ever since its founding.  And instead of treating the Charleston killings as what they are -- racially-motivated hate crimes -- Fox is spinning this as an attack motivated by hatred for Christianity.

They invited Earl Walker Jackson, a minister and unsuccessful candidate for both Senate and Lieutenant Governor in the state of Virginia, to give his opinion.  Jackson is an interesting choice, given that he has made statements in the past that call his sanity into serious question -- such as his claim that doing yoga will lead your to being possessed by Satan.  But apparently Fox, and Fox & Friends host Steve Doocy, thought that Jackson would be the perfect person to comment.

And Jackson fell right in with the Fox party line.  In a segment entitled "Attack on Faith," Jackson said:


Wait for the facts, don't jump to conclusions, but I am deeply concerned that this gunman chose to go into a church.  There does seem to be a rising hostility against Christians in this country because of our biblical views.  It is something we have to be aware of.  We have to create an atmosphere where people don't take out their violent intentions against Christians.  I urge pastors and men in these churches to prepare to defend themselves, at least have some people in there that are prepared to defend themselves when women and children are attacked.


Extraordinarily, they called it a ‘hate crime,’ and some look at it as, ‘Well, because it was a white guy and a black church,’ but you made a great point earlier about the hostility towards Christians.  And it was a church.  So maybe that’s what they were talking about.  They haven’t explained it to us.

So, "I'm here to shoot black people" wasn't enough for you?  You have to jump on this as a chance to prop up your ridiculous persecution complex, trying to convince Christians -- who, allow me to point out, make up 74% of the citizens of the United States -- that they're some kind of embattled minority?

Or is it because your ideology won't let you admit that enculturated racism is still part of our society?

No, we can't go there.  Not in a state where the Confederate flag is still flown over the state capitol building.

And Fox wasn't the only one who went in this direction.  Rick Santorum decided to use the murders to score political points in his run for the Republican nomination for president, as usual kowtowing to his supporters on the Religious Right and making not a single mention of race as a motivation for the murders.  In an interview on AM 970, a New York radio station, Santorum said:


All you can do is pray for those and pray for our country.  This is one of those situations where you just have to take a step back and say we — you know, you talk about the importance of prayer in this time and we’re now seeing assaults on our religious liberty we’ve never seen before.  It’s a time for deeper reflection beyond this horrible situation...   You just can’t think that things like this can happen in America.  It’s obviously a crime of hate.  Again, we don’t know the rationale, but what other rationale could there be?  You’re sort of lost that somebody could walk into a Bible study in a church and indiscriminately kill people.  It’s something that, again, you think we’re beyond that in America and it’s sad to see.

What other rationale could there be?  What, the apartheid-era South African flag on the killer's shirt in his Facebook photograph wasn't enough of a clue for you?

But I think what gets me most about all of this is the callous lack of compassion and empathy for the victims and their families.  This is beyond being tone-deaf; this is calculated, deliberate pandering.  For Santorum and the pundits on Fox & Friends, it was more important to latch onto this tragedy to advance their warped agendas than it was to step back and say, "The crucial thing right now is to stand together as Americans and repudiate racism and racially-motivated violence."

You have to wonder why that's so hard for them to say.  Afraid to lose some of their supporters, perhaps?

I don't know what else to say.  This repulsive use of a tragedy to gain political ground has left me feeling nauseated.  So I'll just add one more thing.  To Senator Santorum, and your allies over at Fox: if you can't find it in your hearts to offer unqualified support and solidarity with the families of the victims of this horrific attack, then kindly just shut the fuck up.

Posted by Gordon Bonnet at 2:49 AM