Speculation, conjecture, and the Sealand skull

One of my attitudes that I've found is remarkably uncommon in other humans is that I don't have the need to have an opinion about everything.

When I don't have enough evidence, one way or the other, I simply don't know -- and that's that.  I find that this response especially annoys teenagers.  When one of my students asks me something like, "Is there life after death?" and I respond, "There's no definitive evidence, so I don't know," I frequently find that they come back with, "Yes, but what do you think?"  When I tell them that if I have nothing to go on, I don't think anything, I often find that they snort in my general direction and walk away.

It's not only a little mysterious that people feel obliged to form strong opinions about things for which they have no data whatsoever, it's mighty puzzling how they come to those opinions in the first place.  In the case of life after death, I suspect that a lot of it is wishful thinking.  The concept of simply being gone is, I have to admit, pretty disturbing, but I've found that the universe seems to be under no particular obligation to present me with reality that I happen to like.  So I'm sticking with "I don't know."  I'll find out sooner or later either way, and until then, I'm content in my state of ignorance.

So when a kid in my Critical Thinking class found a site about the "Sealand skull," and asked me what I thought about it, I had a similar reaction.  The Sealand skull was allegedly discovered by some workers repairing sewer pipes in a house in 2007, in the town of Olstykke on the Danish island of Sealand.  So without further ado, here is the skull in question: 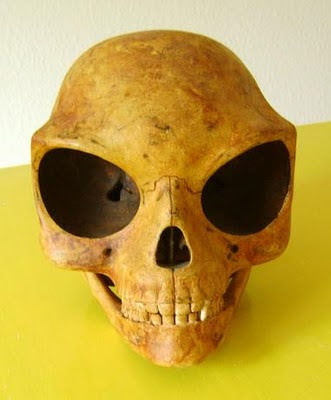 So you can see why the question of "do you believe this?" would come up.  According to the story, the skull was taken to the Niels Bohr Institute in Copenhagen, and radiocarbon dated to between 1280 and 1200 B.C.E.  The skull is supposed to be larger than a typical human skull, and with the outsized eyes, people said that it must be the skull of an alien.

And that's the sum total of what we have to go on.  A photograph.  No hard evidence at all, since none of the sources mention where the skull currently is, who the scientists are who carbon-dated it, or anything else.  There's a brief mention of some group of oddballs called "The Order of the Light of Pegasus" who had a house in Olstykke and were reputed to be "the guardians of objects... believed to be mysterious," but searches for anything related to said Order all bring you back to websites having to do with the Sealand skull.

The whole thing has the hallmarks of a hoax, but do I know it is?  Nope.  To prove that it's a hoax -- or to prove anything else about it -- you'd need to have access to the skull itself.  It certainly seems to be an Extraordinary Claim, the sort of claim apropos of which Carl Sagan said you needed Extraordinary Evidence.  But we not only don't have extraordinary evidence, we don't even have your regular, garden-variety evidence.  We have no evidence at all.  At the moment all we have is an unsubstantiated story -- i.e., a tall tale.

This, of course, hasn't stopped people from spinning out all sorts of speculation about it, because nothing improves a zero-evidence claim like having zero-evidence conjectures derived from it.  So naturally, someone decided to do a facial reconstruction from the Sealand skull photograph, and came up with this:

So apparently, the original owner of the Sealand skull was Gollum.  Which is, honestly, rather surprising.  Didn't Gollum get fried in the lava pit in Mount Doom in the end, along with His Precious?  Because if so, it's hard to explain how his skull could have ended up in a house foundation in Denmark.

Be that as it may, however my intuition is that the Sealand skull is a fake, I know better than to rely on my gut for any kind of reliable approximation of what's real or not.  So I don't really have any conclusion about this, other than to say that if it is real, it'd be a pretty earthshattering discovery, bringing up the inevitable question of why the scientists who studied it weren't trampling each other to death to be the first people to write a paper on it.

But that, too, hardly constitutes proof of anything.  At the moment, the best we can say is that there's no evidence one way or the other for a claim made by an unknown individual about an alleged scientific study by unnamed scientists about a skull that may or may not exist.

So that's that.  Back to speculating about whether or not there's an afterlife, because even that has more going for it, as scientific support goes.
Posted by Gordon Bonnet at 1:53 AM