Most of you probably know that the United States Supreme Court is likely to announce a decision on the federal legalization of same-sex marriage some time this month, and that the decision is likely to come down to how one man votes -- Justice Anthony Kennedy, who is in the uncomfortable position of being the "swing voter." 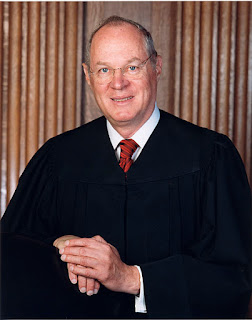 The more liberal-leaning justices -- Sonia Sotomayor, Ruth Bader Ginsburg, Stephen Breyer, and Elena Kagan -- seem likely to vote in favor.  The remaining four more conservative members are likely to vote against.  That means that Kennedy will almost certainly be the one who casts the deciding vote.

And this is why he is currently the target of prayer rallies.

The effort is being organized by "Coach" Dave Daubenmire, who came into the public eye after an ACLU suit to stop him from forcing the players on his high school football team to pray.  Daubenmire and the school district he worked for settled out of court (the school district lost $18,000 in the process), but Daubenmire now spends a lot of time on the lecture circuit telling everyone how he beat the ACLU because of god's power and the power of prayer.

And now Daubenmire, who in his post-coaching days runs a ministry called "Pass the Salt" (further increasing the WTF factor in the whole thing), is organizing a nationwide series of prayer rallies that have as their goal persuading god to persuade Anthony Kennedy to vote no:


We're going to have a solemn assembly of prayer and repentance, asking God, please God, help us rescue marriage.  And we're going to totally focus on Justice Kennedy, we believe he is the swing vote, and we're just going to ask the Lord to forgive us of our sins and turn the heart of Justice Kennedy that he might see the error of his ways and protect marriage. The neat part about it... is that we're asking people from all across America.  Clear out there in California, you can't come to Washington D. C., but could you organize a prayer vigil at the same time we're doing it, noon to three o'clock Eastern Time on June 14?  Could you get the people in your church to come to a prayer rally?  It's not where we're asking the politicians to do something, it's not where we're marching and carrying signs and rebelling, it's where we're saying "Lord, forgive us, how did we ever get in this mess, please, Lord, forgive us."

Can I paint a picture here, real quickly?  I like to use the illustration of Super Soakers, the little squirt guns that look like big cannons that kids like to play with.  That's they way I see prayer.  Everybody has a Super Soaker.  There a lot of people who are praying, and they're squirting their guns, they're doing all they can, but there's a difference between putting a lot of people out in a field and telling them to shoot away, and bringing them into your living room and putting a dot on the ceiling and saying, "Hey, everybody, point your Super Soaker at the dot on the ceiling."  The end result of that, if we got a hundred people to point their squirt guns at the dot on the ceiling, eventually there'd be a hole in the ceiling.  Concentrated, focused prayer.  That's why we think the Salt and Light Brigade is so important.  They don't have to come, we'd love for people to come, but we realize they can't.  But what if they all gathered in their local churches, or with their prayer groups, or with their families, and we told them who to pray for... We're going to focus all of our power in the same direction rather than just sporadically squirting our guns up in the air.  We're going to focus our guns on the same target, and punch a hole in the heavenlies.

So far, this all Super Soakers For Jesus business seems to fall into the "No Harm If It Amuses You" department, but I do have to wonder how this could possibly work even if you accept Daubenmire's premise that there is a god who somehow likes to micromanage affairs here on Earth.  Daubenmire and his ilk always go on and on about how god knows everything and is all-good and all-powerful and will ultimately make everything work out; so it seems a little odd that anyone who believes that would think that prayer would accomplish anything.  Either your opinion is in line with what god already intended to do (in which case god was going to do it anyway, and your prayers are unnecessary) or it isn't (in which case god has no intent of doing what you say, so your prayers are futile).  Either way, it doesn't accomplish much.

Even C. S. Lewis, whose writing is usually pretty clear-headed and rational -- not that I agree with most of his conclusions -- seemed troubled by all this.  In his essay "Does Prayer Work?", he is up front that you can't change god's mind, but he thinks that petitionary prayer still somehow makes sense:


Can we believe that God ever really modifies His action in response to the suggestions of men?  For infinite wisdom does not need telling what is best, and infinite goodness needs no urging to do it.  But neither does God need any of those things that are done by finite agents, whether living or inanimate. He could, if He chose, repair our bodies miraculously without food; or give us food without the aid of farmers, bakers, and butchers, or knowledge without the aid of learned men; or convert the heathen without missionaries.  Instead, He allows soils and weather and animals and the muscles, minds, and wills of men to cooperate in the execution of His will.

Which, frankly, strikes me as a little petty.  It's like a parent saying to his child, "I know you're hungry, but I'm not giving you food unless you ask, and you have to ask in exactly the right way."

And it also brings up the problematic situation for Daubenmire if Kennedy votes "yes."  Was god not listening?  Did the devil persuade Kennedy to vote in a more infernal way?  Did the prayers not work for some other reason?  Did they not have enough people praying?  ("You know, if there'd been 1,284,733 people praying, I'd'a had a chat with Justice Kennedy.  But 1,284,732 people just didn't quite do it for me.")

Because if god is so dead-set against same-sex marriage, you'd think he'd find a way to make sure it didn't happen regardless, right?

So the whole thing seems to turn on a philosophical point that doesn't, honestly, make a lot of sense.  It's far from the only thing in this worldview that I can't make sense of, of course.

As I said before, however, there's no real harm in it.  If they want to spend their time trying to change a presumably all-knowing deity's mind, they can knock themselves out.  At least that's less time they'll have to try to convince politicians, who not only can be swayed, but who actually exist.