One of the things that perplexes me about woo-woo beliefs is how specific they can get.

You don't just think there's an afterlife, you have intricate details about what heaven and hell are like.  You're not just superstitious, you think putting an acorn in your window will keep your house from getting struck by lightning. You don't just have a belief that the positions of the stars and planets control your life, you believe that people who were born when Mars is in Aquarius tend to like phone sex.  (I'm not making this up.)

So I'm left thinking, "How do they know all of this?"  I can understand being generally prone to goofy beliefs; it's amazing what a combination of confirmation bias and wishful thinking will do.  What I don't understand is how you get from generalized woo-woo to having access to minuscule details.

Take, for example, the website that I was sent a couple of days ago by a reader of Skeptophilia.  Accompanied by a note that said, "Bet you thought there was just one!", I was given a link to site called "The Six Alien Species Currently Fighting for Control Over Earth," in which we find out that Earth is apparently the prize in a six-way extraterrestrial game of "Risk."

First, we have the Sirians, who supposedly helped the Egyptians and Mayans build the pyramids, and were also in contact with the "Atlanteans."  Because, you know, there's nothing like bringing in a fictional civilization to beef up your claims that Earth has been visited by aliens.  The Sirians, we hear, are a highly technological civilization that comes from "the Sirius B star system."

You'd think the "highly technological" part would be obvious, right?  I mean, if they've come here from Sirius, 8.6 light years away, they're not traveling in a horse-and-buggy.  But there's a problem with a civilization coming from Sirius B; Sirius B is a white dwarf, meaning that it is a stellar remnant left behind after the calamitous death of a red giant star.  Any planets that orbited Sirius B were fried long ago, and the tiny star left behind is of low enough luminosity that there's no way it would warm a planet's surface enough to sustain life, even if any life survived the initial cataclysm.

But we won't let little things like facts interfere.  Let's find out about the five other alien species, shall we?

Next we have the "Short Grays," made famous in the historical documentary Close Encounters of the Third Kind, and which are also known as "Zeta Reticulums."  Evidently because that's the star system they come from.  They are "the authors of most alien abductions" and have "telepathic abilities (that) allow them to constitute a type of hive mind consciousness."

Then we have the "Tall Grays," who of course are more powerful than the "Short Grays," presumably because they're taller.  They are "the ambassadors of most meetings between human and alien forces" and "are keen on developing a stable human-gray hybrid race," which I'm hoping that they're doing by genetic manipulation, because otherwise we're talking hot human/Tall Gray sex, and as open-minded as I like to think I am, that's just creepy. 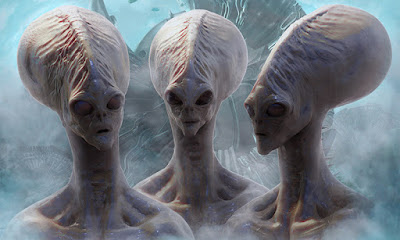 Next, there's the Reptilians, who come from Alpha Draconis, in the constellation of Draco the Dragon.  Of course.  Because what a group of stars looked like to a bunch of ancient Greeks who had been hitting the ouzo clearly would affect the kinds of life that would evolve on the planets orbiting those stars.  Be that as it may, the Alpha Draconians are "14 to 22 feet tall... (w)eighing an estimated 1,800 pounds."  Which is pretty badass.  Also, they have "tails, or even wings," which makes me wonder if the author has actually seen one.  Because you'd think you would be clear on that point, right?

Then there are the "Native Reptilians."  Here's where things get even more confusing, because apparently these are shape-shifting scaly dudes who "have infiltrated almost all aspects of human life and hold positions of power," and "built the financial system and influence all religions."  But if they're natives to Earth, then they're not aliens, right?

Cf. what I said earlier about not letting facts get in the way.

Lastly, we have the Annunaki, who come from a galaxy they call "Illyuwn."  They're the ones who created us, apparently; "through genetic manipulation and in vitro fertilization," we're told, "they upgraded the genus Homo to sapiens quality."

Well, all I can say is, they did a pretty piss-poor job.  If a super-powerful alien species altered our DNA to become a superior race, and as a result we still have Donald Trump running for president, I think the Annunaki should go back to Illyuwn and let someone more capable take over.

So there you have it.  Our alien overlords.  And if you were laughing while reading this, and thinking, "How does this person know all of this?", well, so was I.  But maybe your laugh will sound a little hollow when you ask the same question about how people know that god wants guys to grow beards and have sideburns (Leviticus 19:27).  Because a lot of the bible seems to me to be extremely detailed information about what's going on in the mind of a deity that no one has ever seen.

But that's religion, and that's different than believing in super-powerful beings who live in the sky and control our destiny, right?

Of course, right.
Posted by Gordon Bonnet at 2:48 AM