The rising stars of American politics

I'm sure that many of you are wondering what's going to happen in the 2016 presidential election, likely to be a race between either Hillary Clinton or Bernie Sanders (for the Democrats) and whichever of the 2,781 people who have declared they're seeking the Republican nomination manages to come out ahead.  I can't get all that worked up about it, myself.  I've been through this process enough times that to me, most politics seems to boil down to "meet the new boss, same as the old boss."  And every time someone is elected and there are dire predictions by the opposition about what's going to result, what ends up happening is...

... pretty much what always happens in government.  Namely, bureaucratic gridlock.  For example, take all the hoopla about how Obama is going to repeal the Second Amendment and steal everyone's guns.  This has been a running theme of the anti-Obama cadre for what, seven years now?  And if you look around you, you'll find that everyone is as heavily armed as ever, and the Second Amendment is still firmly in place.

If Obama wants our guns, dude better get his ass in gear.  He's only got a little over a year left.

Now, I won't say that politics doesn't matter.  You can definitely see the situation in the Middle East having gone a different direction had the Bush administration not launched a war against Iraq and Saddam Hussein, for example.  Whether it would have been better or worse is a matter of contention, but I don't think anyone can argue that it made a difference.

But that's the thing, isn't it?  Whoever gets elected, we still have the chaotic nature of world events to deal with, and the inherent unpredictability of how everyone's going to respond.  Add that to the treacle-like speed of progress in the halls of government, and it's no wonder that politics, when viewed from above, looks like a giant, extremely slow-moving pinball game. 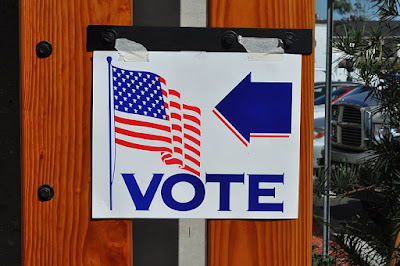 [image courtesy of photographer Tom Arthur and the Wikimedia Commons]

Of course, that doesn't stop people from being curious about where things are going.  And I'm here to tell you today that you can relax.  It's all settled.  We know who's going to win in 2016.

Because the psychics have weighed in.

Three psychics were interviewed in The Washington Post, and gave their prognostications about the outcome of the election.  And because at this point they've got as much chance of being right as anyone else, I present to you: the results of the 2016 American presidential election.

First, we have the wisdom of "Angel Eyedealism," who has pink hair and says that astrology is "pseudoscience based upon two exact sciences."  Which should give you confidence right there that she knows what she's talking about.  And Ms. Eyedealism says that she drew up "natal charts" for Hillary Clinton, Jeb Bush, and Donald Trump, and in her opinion, Clinton is a shoo-in.

"Hillary has Jupiter in the ninth house, the house of politics, now, and it is heading to conjunct her M.C. [medium coeli, or "middle of the sky"]," Eyedealism said. "I'm getting goosebumps."

Ooh, me too!  I always feel that way when I get conjuncted by Jupiter!

Clinton's looking good in other respects, too.  "Jupiter has already conjuncted Pluto, so she has luck and power behind her, and it will conjunct Saturn, so she's serious...  She has luck and a motherfucking plan."

Bush, on the other hand, doesn't have much going for him except that he got conjuncted by an asteroid, or something, which sounds kind of painful.  And Uranus is in his Eighth House, which apparently means people will be giving him money.  But otherwise, he's not showing up very well, astrologically.  Trump, on the other hand has a "trine," which means three planets making an equilateral triangle.  This is good, for some reason, but she still thinks he won't win.

And what about all of the other people who were born in New York City on the same day as Trump? the interviewer asked.  Why aren't they all filthy rich, running for president, and sporting a hairstyle that looks like they're wearing a roadkill possum on their heads?

"Remember, not everyone lives out the potential of their chart," Eyedealism said.  "We have choices.  Some people who could have been Donald Trump made choices not to be."

Which certainly seems like a good choice to me.

Then, we turn to Angelia Johnson, a numerologist.  "I have been a psychic professional healer and adviser for over 25 years," Johnson told the reporter, "and have now graduated to psychic matchmaking."

So you can see right away that she's completely qualified to select the next president of the United States.

And Johnson's also going for Clinton, even though Jeb Bush's "number is a three."  "Because he's a three, he's connecting with people mind, body and spirit," Johnson said.  "His heart chakra is viving."

Which sounds like maybe he should see a doctor.

Chris Christie, on the other hand, has a third-eye chakra, and his number is a four.  Don't ask me why that's important, but Johnson would like to see a Clinton/Christie combo, not that that's likely.

So right away, we're off to an authoritative start.  She did the Republican hopefuls first, or at least the top few, and found out that Jeb Bush, Rand Paul, and Donald Trump were "contenders," that Ben Carson was going to do "okay," and that there's something going on with Scott Walker's wife.  She didn't say what.  As far as the Democrats, she said that Clinton was in for some kind of emotional upset, and Sanders doesn't have the cojones (direct quote) to win.

So let's cut to the chase... who will win?  Lucy drew the "Wheel of Fortune" card, upside down.  Which means, "I get only a 10 percent chance and this card came upside down ... it means turning in reverse."

So in the end, we had two votes for Clinton, and one for things being up in the air.  I think we can all agree that this is a pretty definitive result, especially given that we cross-checked our results using not just one but two other methodologies.  That's how the scientific method works, right?

Me, I'm longing for the days when Pat Paulsen used to run for president.  Anyone my age will probably remember Paulsen, a comedian who threw his hat into the ring every presidential election between 1968 and 1996, and actually got votes every time from people whose attitude was "I'll vote for anyone but the clowns who are actually running."  We need someone with Paulsen's commitment to the process.  Someone with cojones.  Someone whose heart chakra is viving.  Someone who has trines in all of their asteroid conjunctions.

Someone who has a vision, who is clear-minded, and who knows exactly how to give us four more years of the same bureaucratic gridlock that has made America great since its founding.
Posted by Gordon Bonnet at 2:50 AM