The young and the relentless

My mom was a deeply devout Roman Catholic and was politically a staunch conservative.  She had a strong sense of propriety (veering off into prudishness on occasion), and thought that etiquette and manners were a critical glue for social interactions.

But for all of her characteristics that would seem to many to be old-fashioned, she had one opinion that I can recall her voicing many times:  "My rights end where your nose begins."

In other words, I can disapprove of what you do, how you live your life, how you vote, what you believe, but I have no right to stop you from doing any of those things.

This is a point that a lot of folks seem to miss.  Such as person in Baltimore who objected to a neighbor's yard decoration of a rainbow-colored array of solar lamps. 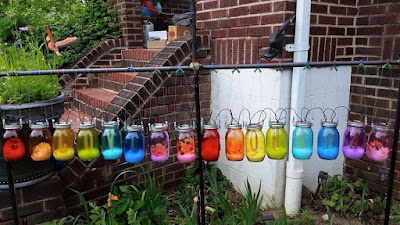 Pretty, aren't they?  So what's to dislike?

They are, the "Concerned Home Owner" said, "relentlessly gay."  Here's the note that Julie Baker, the owner of the house with the lights, received:


Your yard is becoming Relentlessly Gay! Myself and Others in the neighborhood ask that you Tone It Down. This is a Christian area and there are Children. Keep it up and I will be Forced to call the Police on You. Your kind need to have Respect for GOD.

This brings prudishness to a whole new level.  Now, we have to worry about offensively-colored solar lamps?

Myself, I think this phrase should become part of common parlance.  Consider how useful it could be:

Julie Baker, to her credit, is not fazed by her neighbor's disapproval.  She is leaving her #RelentlesslyGay solar lamps up, and in fact, is not #ToningItDown, she is #RampingItUp.  She has started a GoFundMe campaign to make her yard and house even gayer and more relentless:

So, I am starting this fundraiser so I can work to make my Home even More "relentlessly gay" If we go high enough, I will see if I can get a Rainbow Roof!

Because my invisible relentlessly gay rainbow dragon should live up there in style!

Put simply, I am a widow and the mother of four children, my youngest in high school and I WILL NOT Relent to Hatred. Instead, I will battle it with whimsy and beauty and laughter and love, wrapped around my home, yard and family!!!

So far, she's raised $37,500.  That should pay for a lot of #RelentlesslyGay decorations.

And perhaps you have noticed by now the craziest thing about all of this:

Baker herself is straight.

Not, of course, that it should matter, but that was the little filigree that just sent me over the edge.  There are people who are so determined to use their own belief systems as a cudgel that they see everyone as the enemy.

The other thing that occurred to me is to wonder if Concerned Home Owner has actually read the bible, because there's this whole thing in Genesis 9... about rainbows:

So after the good and all-loving god drowned damn near every living thing on Earth, he said, "Oh, but hey, look!  Rainbows!  Meaning I won't ever do that again, I promise!  Still friends?"

All things considered, I'd rather have a rainbow be a symbol of being #RelentlesslyGay than a symbol of #DivineGenocide.  But that's just me.

So I'm off to eat some breakfast.  Black coffee, eggs, and bacon.  You know, food that's #RelentlesslyStraight.  Can't be too careful.  You never know who might be watching.