A conspiracy of denial

I find it interesting how reluctant rational people are to saying to the irrational, unscientific ones, "You're wrong."

You'd think it'd be clear, right?  Science provides us with a straightforward protocol for establishing whether a particular model works.  There is hard evidence -- the theory is supported.  No evidence, or worse still, evidence against -- the theory must be revised or abandoned.  In practice, producing and interpreting the evidence might be difficult, time consuming, costly, or all three, but in principle, the idea is simple enough.

So why do even skeptics have such a hard time coming out and making an unequivocal statement that people like climate change deniers and creationists and anti-vaxxers are not just wrong, but wildly, dangerously wrong?

Some do, of course.  There have been some scathing papers written on the subject.  But the further you get from the science journals themselves, the more people tend to waffle, and say things like, "Well, that's your opinion" or "More research needs to be done."

My sense is that it's to avoid accusations of bias, of being controlled by special interests.  Tolerance of a variety of viewpoints has morphed, somehow, into the toxic attitude that we can't come right out and say that a blatantly incorrect claim is, simply, wrong.  Add into the mix the tendency of politicians to pander to the most vocal of their supporters, and you might have an explanation for why we have a 97% consensus (or higher) amongst scientists that climate change is real and anthropogenic in origin, but 56% of the majority party in the United States Senate are climate change deniers -- and a significant percentage of the minority party has chosen to remain silent on the matter. 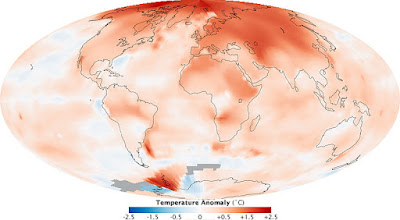 [image courtesy of Victor Komyenko and the Wikimedia Commons]

But a recent study by Stephan Lewandowsky, John Cook, Klaus Oberauer, and several other social psychology researchers at the University of Western Australia has shown that there is another reason that even skeptics are reluctant to speak up.  Their paper, "Recurrent fury: Conspiratorial discourse in the blogosphere triggered by research on the role of conspiracist ideation in climate denial," was published in the Journal of Social and Political Psychology, and it makes an interesting claim: unscientific claims, such as the denial of climate change or humanity's role in it, go hand in hand with conspiratorial thinking.

In other words, the rejection of science because of ideology is often coupled with a strong belief that the opposition is in cahoots with, perhaps even in the pay of, the unscrupulous, greedy, or outright evil.  We see it with the anti-vaxxers -- the countless scientific studies showing that vaccines are safe and effective were sponsored by, and therefore biased by, "Big Pharma."  The scientists who can demonstrate hard data supporting anthropogenic climate change are either falsifying the numbers so they can scare people and thus get grants from funding agencies, or are (in the words of Ted Cruz) "driven by politicians who have always supported more government control."

And of course, those who accept evolution are the worst of all, because they're just being controlled by Satan himself.

The study by Lewandowsky et al. studied blogs that had mentioned an earlier paper by the same researchers entitled "NASA Faked the Moon Landing—Therefore, (Climate) Science Is a Hoax: An Anatomy of the Motivated Rejection of Science" that had appeared three years ago in the journal Psychological Science.  This paper tried to show that people who exhibited conspiratorial thinking were more likely to hold unscientific views on other topics.  Considering the subject matter, the paper got a lot of mentions in blogs (both positive and negative).  So Lewandowsky et al. realized that this was, in itself, an excellent data set to study.

They sorted the commentary into two groups; comments that had come from climate-denial sites, and criticisms that had been made of the paper in legitimate science journals.  Conspiratorial thinking was broken down into the following subcategories:
These were differentiated from criticisms that had to do with methodology, data analysis, and research protocols.

The comments were given (without sources) to undergraduates, who were asked to distinguish which criticisms had come from scientists, and which from climate change deniers.

The results were unequivocal.  Not only did the test subjects correctly identify which were which, but they recognized even subtle differences between a legitimate critique and accusations of conspiracy.  Climate change denial, it turns out, correlates across the board not with legitimate scientific criticism, but with conspiratorial thinking.  "I do not recall ever having seen such a strong effect in thirty years of behavioral research, and I have certainly never encountered ratings that favored the extreme end of the scale to the extent observed here," Lewandowsky said.  "Conspiracism, by definition, is not skepticism. Hence it is important to show that self-anointed 'skeptics' are not skeptical...  The [climate change denying] blog content was identified not only as conspiracist, but also as lacking in scholarly incisiveness.  This is very important because it shows that conspiracism isn’t 'a price you pay for skepticism'—on the contrary, conspiracism detracts from scholarly critique."

Me, I find this an unsurprising result.  And it explains why the politicians, even the ones who are reasonable and rational, have been unwilling to stand up and say "bullshit" to the likes of Ted Cruz and James Inhofe.  In politics, the ideal is to be unbiased, to listen to all sides, and not to be beholden to special interests.  It's risky to take a stand -- especially when powerful and vocal people are likely to accuse you of being a shill, a part of the evil conspiracy to fool the honest citizenry.  Easier to stay silent, to pretend that there still is a debate on the topic, than to come right out and say, "You're wrong."

Of course, the climate itself will eventually force our hand.  Neil deGrasse Tyson said, "The good thing about science is that it's true whether or not you believe in it."  Here, we have a darker twist on this aphorism -- the climate will continue to change, the world to warm, regardless of how many snowballs idiots like Senator Inhofe throw onto the floor of the Senate.  2015 is already shaping up to break the temperature record -- set, by the way, in 2014.  Just in the first six months of the year we've had unprecedented droughts in California, floods in Texas and the Midwest, deadly heat waves in Pakistan -- and in March, three months past the solstice, Antarctica had its warmest day since records have been kept -- 63.5 degrees Fahrenheit, recorded at Esperanza Base on the Antarctic Peninsula.

Reality, it seems, has no particular problem with being part of the conspiracy.
Posted by Gordon Bonnet at 3:41 AM