A couple of days ago I finished Michael Ray Taylor's wonderful book Dark Life, about the search for microscopic life forms in unsuspected places -- in mile-deep cracks in the Earth's crust, in highly acidic or carbon monoxide-laden caves, and even in meteorites that originated on the surface of Mars.    Far from a dry, textbook-like read, this was a fascinating look at how science is actually done, putting a lens on the people, the conflicts, the biases, and the years of hard work that go into building a case for a claim.

It's worth it for non-scientists to read books like this.  Because by and large, popular media does a piss-poor job of portraying how science is done, and it leaves a lot of the public with the impression that scientists sit around in their offices making wild conjectures all day and pulling whatever scanty bits of evidence they have out of their nether orifices.  Science is seen as pot-shot guesswork, where any claim is as valid as any other, and "everything could be disproven tomorrow."

Sometimes, of course, the scientists themselves don't do the entire enterprise any favors.  Consider, for example, the current hype over Comet 67P/Churyumov-Gerasimenko, which was the subject of a press release from astronomer Chandra Wickramasinghe.  Wickramasinghe and his colleague, Max Wallis of the University of Cardiff, are claiming that the Philae lander, currently sending information on the comet's surface and composition, has discovered evidence that the comet hosts microbial life:


The data from Philae supports the presence of micro-organisms being involved in the formation of the icy structures, the preponderance of aromatic hydrocarbons, and the very dark surface...  These are not easily explained in terms of prebiotic chemistry.  The dark material is being constantly replenished as it is boiled off by heat from the sun.  Something must be doing that at a fairly prolific rate. 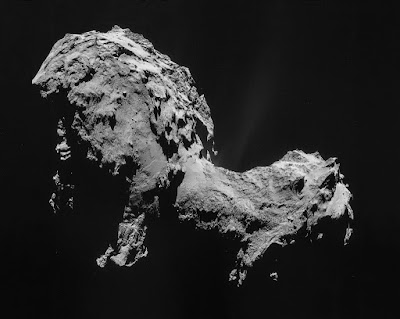 Most telling of all, Wickramasinghe -- despite being an astronomer -- has thrown his support behind creationism.  He was the only scientist to testify for the defense in the 1981 creationism trial in Arkansas.  He has written:

So we're not talking about someone who has built himself much of a reputation for credibility.  But of course, the slow, difficult, slogging kind of scientific research described by Taylor in Dark Life -- the kind that makes up 99% of the actual science done by researchers -- isn't nearly as sexy as the wild claims thrown about by people like Wickramasinghe.  So given a chance to report either on actual science or on loopy, zero-evidence claims, the media is always going to go for the latter.

And consider how this sort of thing is depicted.  Wickramasinghe isn't called "a nut with an axe to grind," he's called a "maverick."  And you know how people love "mavericks."  Mavericks are tough, they're strong, they're willing to buck the system (despite the fact that here, the "system" -- the scientific method -- has an excellent track record of establishing the truth).  They make exciting, bold statements that fly in the face of conventional wisdom.  They talk about thrilling stuff like "having to rewrite all the textbooks."

The problem is, these claims have a history of vanishing without trace.  There always turn out to be other explanations -- as a case in point, take a look at physicist Chris Lee's explanation for the carbon on 67P/Churyumov-Gerasimenko, wherein we find that surface carbon layers are perfectly capable of forming, abiotically, in conditions such as those the comet experiences.

So the comet's dark surface might be biological in origin, just as there might be life in any number of other places -- Jupiter's moon Europa and Saturn's moons Titan and Enceladus usually being considered the best bets.  But as of right now, we simply don't know, and those claims aren't even at the level of verifiable hypotheses until we send out probes with landers designed to detect life, something that probably won't be done any time soon.  (A flyby probe is being sent to Europa, which will certainly return some interesting data but is unlikely to settle the question definitively.)

So once again, we have the problem of the popular media misrepresenting science as a long, meandering series of untested and untestable conjectures, leading to a significant percentage of the public coming away with the impression that the whole endeavor is some kind of flighty game that consists largely of making shit up.

The whole thing is unfortunate, because given the global problems we're currently facing -- climate change, food shortages, overpopulation, pollution -- we not only need scientists, we need a citizenry (and the politicians they elect) who are conversant in the basic methods of science.  Most importantly, we need to reestablish science as credible, so that we don't have anti-science knuckle-draggers like Senator James "Snowball" Inhofe being appointed to the Committee on Environment and Public Works -- and having their moronic statements given more credence than the painstaking, peer-reviewed work of researchers who actually know what they're talking about.
Posted by Gordon Bonnet at 3:09 AM