Let's have a little chat about the topic of risk.

It's something that a lot of people don't understand, but in principle, it's a simple concept.  Actuaries, and other folks who get paid to think about such things, define risk as the product of two probabilities: the probability of exposure and the probability of harm.

The problem is that misassessment of one or both of these two probabilities leads people to (in some cases) wildly overestimate the risk of certain behaviors, and (in others) to wildly underestimate it.  Often, these misassessments have to do with the familiarity of something -- familiar, everyday things are usually considered safer than they really are, and unfamiliar ones more dangerous, regardless of whether those perceptions are at all rooted in reality.

Dan Gilbert, in his wonderful TED talk "Why We Make Bad Decisions," illustrated this perfectly with a photograph of a burning skyscraper, a plane crash, a terrorist bombing site, and a swimming pool.  He then asked the audience to play the Sesame Street game of "Which Of These Things Is Not Like The Other?"  "If you chose the swimming pool, you're correct," Gilbert said.  "Because of the four, it's the one that is by far the most likely to kill you."

This becomes even worse when we start looking at the risk of "chemicals."  I put the word "chemicals" in quotation marks, because of course, everything is made up of chemicals.  (I once saw a sign for "U-Pick Organic Chemical-Free Strawberries."  Ponder that one for a while.)  The problem is, lots of people don't understand chemistry, and so anything with a fancy-sounding name immediately gets put in the "unfamiliar/dangerous" column, even if it's a perfectly innocuous compound, or even one that is essential for life.

Even dangerous chemicals, of course, don't necessarily act straightforwardly.  It's not enough to say that a compound is toxic -- you also have to ask how likely it is to get inside you and cause trouble, and whether the dosage you're being exposed to is, in fact, dangerous.  It's why all of the panic earlier this year about "radioactive water from Fukushima" being detected on the shores of western Canada was unfounded -- the radioactive isotope detected, cesium 134, was only discovered because it's unlikely to get into seawater any other way.  Jay Cullen, oceanographer at the University of Victoria, said, "We're more than a thousand-fold below even the drinking water standard in the coastal waters being sampled at this point.  Those levels are much much much lower than what's allowable in our drinking water."

So the dosage was far smaller than our daily exposure to naturally-occurring sources of radiation, and would be entirely harmless even if we were drinking seawater, which most of us don't.  But it didn't stop people from freaking out completely about how we were being poisoned, irradiated, and (of course) all gonna die.

A more recent goofy claim that has the interwebz in a tizzy lately is the claim that asbestos has been discovered in crayons.  Asbestos, of course, is one of those words like "radioactivity" -- all you have to do is say it and people start thinking they're being killed.  In fact, the danger of asbestos for most people is minimal -- the majority of the asbestos that's still around is safely locked up in wall board and ceiling tiles.  It's only when asbestos-containing materials get broken up, and the dust produced that way is deeply inhaled, that it increases one's likelihood of getting certain lung cancers, such as mesothelioma.

So what about the asbestos in crayons?  First of all, there's the difficulty in telling apart asbestos fibers from talc.  Talc, a chemically related mineral, is used in all sorts of things, up to and including baby powder.  You also don't want to inhale talc -- but the same could be said for any finely-powdered mineral. 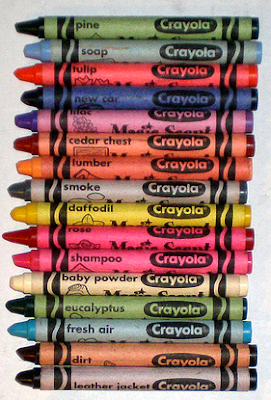 Second, even if there was asbestos in crayons, could it hurt you?  The answer is "almost certainly not."  All the way back in 2000, the Consumer Product Safety Commission was prompted to do an analysis of crayons, and found "a trace amount of asbestos in two Crayola crayons made by Binney and Smith and one Prang crayon made by Dixon Ticonderoga" but stated that "the amount of asbestos is so small it is scientifically insignificant."  Add that to the fact that this "scientifically insignificant" quantity of asbestos is bound up in the colored wax that makes up the rest of the crayon, so the likelihood of inhaling it is nil, and you have what is commonly called a "tempest in a teapot."

Snopes put it succinctly: "In other words, if trace amounts of asbestos were encased in a waxy substance such as crayons, those fibers would not be friable and would pose no risk of becoming airborne."

It'd be nice if more people would learn about risk and toxicity -- not only would it get them to calm down about the stuff they're exposed to on a daily basis, most of which their bodies handle just fine, it would also stop people from forwarding ridiculous claims on Facebook and Twitter, which is getting to be annoying.  In any case: don't worry about letting your kids use crayons.  Coloring in a coloring book is not going to give them lung cancer.  All you have to do is make sure that they aren't grinding up their crayons and snorting the powder.

But I'm hoping you'd do that in any case.