I am frequently confounded by the capacity for humans to be rational and irrational at the same time.

Take, for example, the Icelanders.  Iceland has a 99% adult literacy rate.  Same-sex marriage was legalized in Iceland in 2010 -- by a unanimous vote in parliament.  In polls regarding religious belief, they have one of the highest percentages of atheists in the world.  (31% of Icelanders identify as "non-religious.")  In response to the Charlie Hebdo attack, the Icelandic government just this month voted by an overwhelming majority to decriminalize blasphemy -- not because they (or I) think that ridiculing someone's beliefs is nice, but because protecting free speech is more important than making sure that religion has some kind of Get-Out-Of-Jail-Free card with respect to criticism.

"Freedom of expression is one of the cornerstones of democracy," a government spokesperson said.  "It is a fundamental point in a free society that people can express themselves without fear of punishment of any kind, whether on behalf of the authorities or others...  The Icelandic parliament has issued the important message that freedom will not bow to bloody attacks."

And yet... there are some odd things about the place.  There has been a resurgence in belief in the old Norse gods -- Odin, Thor, Njord, and the rest -- the Germanic neopagan belief system "Ásatrú" is amongst the fastest-growing religions in Iceland.  A poll, later verified by a thorough study, found that 54.4% of Icelanders believe in the huldufólk, which usually gets translated in English as "elves."  As I've mentioned before, there have been highway projects that have been stalled because someone decided that the proposed road was going to trespass on property owned by "the secret people."

But best of all, an Icelandic woman named Hallgerdur Hallgrímsdóttir has just published a book on how to have sex with elves.  And why you should want to.

Hallgrímsdóttir says her first sexual experience with an elf happened by accident.  "I was just wandering around," she says, "in Icelandic nature, alone in this beautiful situation, and he just came to me.  He whispered some things in my ear -- dirty talk, they're quite good at that, actually."

They're "tall and beautiful," she says.  "It almost looks like their skin emits light." 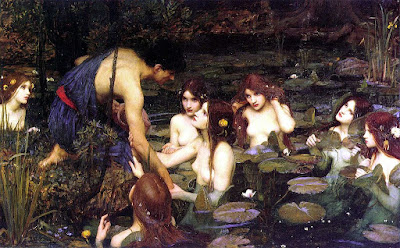 As far as what hot elf-on-self action is like, she waxed rhapsodic.  "It's almost like they know what you want in bed.  They don't have to ask, they can read your mind, and know better what you want than you do...  They're very flexible, so they can use positions that would not be possible for humans."

She backs this up with a series of stick figure drawings that made me choke-snort an entire mouthful of coffee, especially the one of an extremely male elf with an arrow pointing to a body part labeled "geyser."

There are both male and female elves, she tells us, and they are a pretty open-minded lot.  "All elves are bisexual," Hallgrímsdóttir says, "but guys and girls not ready for some same sex action don’t worry, no elf will do anything you don’t want to."

Amongst other things that you don't have to worry about, elf-sex-wise, are STDs and pregnancy.  You can become pregnant by an elf (or make a female elf pregnant), but you both have to want to make a baby for this to happen.  Which is pretty convenient.

Oh, and elf semen is "glittery and shimmery."  So there's that.  She includes an "artist's rendition" of the result of a male elfgasm, which is striking not only in colorfulness but in quantity, and in (as it were) a rather impressive trajectory.

There are various other details that are, shall we say, a little too salacious for me to include here, so if you're curious you'll just have to listen to the interview with her on the link I posted above.  Suffices to say that the Icelandic tourist industry might want to plan ahead for an influx of people who are, um, hopeful in the supernatural romance department.

I'm curious to know how many people actually take her seriously.  The article says that Hallgrímsdóttir gets "a lot of flack from her countrymen" for her beliefs -- but if over half of Icelanders believe that the Hidden People exist, what's stopping Legolas et al. from seeking out illicit liaisons with their human cohabitants?  Is it that the people who believe in elves aren't really all that serious about it, sort of in the way otherwise rational people will wear a lucky hat to a baseball game, or avoid walking under a ladder?  It certainly seems odd that a populace that is as literate, well educated, and generally rational as the Icelanders would subscribe to a belief that is (to put it bluntly) extremely wacky.

But maybe all humans are like that -- masses of contradictions, all thrown together under a thin veneer of logic and reason.  Maybe I am, too, for all of my talk of skepticism and science.  Go beneath the skin, and there might well be a little pagan in all of us, however we might want to consecrate it or else expunge it entirely.  As one of my favorite quotes from Walt Whitman goes, "Do I contradict myself?  Very well, then I contradict myself.  I am large, I contain multitudes."
Posted by Gordon Bonnet at 4:03 AM