A long-time reader of Skeptophilia sent me a link yesterday to a story from Wales, in which we find out about a family who is allegedly being terrorized by demons and poltergeists.

The bare bones of the story, which won't take long to tell because it pretty closely resembles most such claims, is that Keiron and Tracey Fry of New Tredegar, near Caerphilly, Wales, have been visited by spirits who are making their lives miserable.  Jon Dean, author of an article about the haunting that appeared in Wales Online last week, writes:


Keiron and Tracey Fry say they have been terrorised by the poltergeist every night for months, in scenes reminiscent of supernatural chiller Paranormal Activity.

Mum Tracey, 46, even thinks she is beaten up in the night by the 'incubus demon' - leaving her covered with bruises in the morning.

An incubus is a demon in male form who, according to mythological and legendary traditions, targets sleeping people, especially women...

The family got in a specialist to "cleanse" the house and brought a vicar in to bless their home.

The phantom, which has also been menacing the couple's three children, was summoned by a using a Ouija board in the house, they say.

Dad-of-three Keiron says he took a pic of the ghost in his sons' bedroom which he says shows a small child in a white gown with a blue face and a tail.

Without further ado, here is Fry's photograph of the alleged ghost: 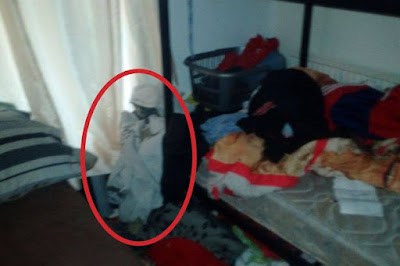 So the family decided to take action:


The family, who moved into their house in July 2013, called in an investigator to tackle the spook.

Ghostbuster Robert Amour, 43, arrived at the house with a bible and crucifix.

He banned the petrified family from going upstairs after he shouted to them that he could "feel the evilness in the room."

After 20 minutes the psychic returned to the frightened family - claiming he had slain two small demons.

Which is pretty hardcore.  Of course, we have the usual problem; the whole story relies on anecdote and flimsy photographic evidence.  So I'm very much inclined to disbelieve it, even if (I will admit up front) I have no proof that they aren't being haunted by a violent ghost that looks suspiciously like a knotted-up bedsheet.

The incident got me to thinking about hoaxes in general, and what is so appealing about them. Because whatever the Frys' claim turns out to be, it is a sorry truth that hoaxes are extremely common in the woo-woo world.  It seems like every other day people get caught out faking bigfoot photographs and tracks, using Photoshop to create realistic-looking UFO photos, and employing stage magic to convince people that psychic phenomena are real.  The whole thing pisses me off, because the human propensity for fakery makes it even harder for we skeptics to discern whether there's anything to all of the paranormal claims out there.  To paraphrase Michio Kaku (who was speaking about UFOs) -- if even 1% of the claims of supernatural goings-on are legitimate, it's still worth investigating, and hoaxes do nothing but muddy the waters.

So the hoaxers certainly aren't even doing the true believers any favors.  But it did get me wondering why people create hoaxes in the first place, because it's something I honestly can't imagine doing.

I know that part of the motivation is money, especially for the mediums and faith healers and so on, who are charging big bucks for people to participate in their nonsense.  But there is a lot of fakery that doesn't explicitly involve the money motive -- think of all of the UFO and cryptid sightings and reports of ghosts that turn out to be completely made up, and just result in one or two newspaper articles or television interviews before they die out as quickly as they started.

What on earth can motivate people to do this?

I expect the answer lies in the "fifteen minutes of fame" phenomena -- the drive that some people experience to get their names in the newspapers somehow.  As a person who is at the "very introverted" end of the spectrum, this is hard for me to imagine.  It's difficult enough for me to be the center of attention for things I've actually accomplished; the idea of manufacturing a lie, knowing I could be found out and humiliated as a liar, for the sole reason of getting interviewed on television -- well, it just strikes me as bizarre.

But I honestly can't think of any other reason that someone would do such a thing.  It's unlikely that most of these incidents generate much in the way of income, so the only other possible motivator must be fame.

Which brings us back to the Frys.  Again, I can't prove their claim is a hoax, but even the fact that that they mentioned that their experiences were "reminiscent of supernatural thriller Paranormal Activity" -- and the article ended with the movie trailer -- makes my Suspicion Alarm start ringing.  And if their claim does turn out to be cut from whole cloth, can you imagine what the repercussions will be?  They've been in the newspapers and online, with photographs (including their children, for pete's sake).  They'd be laughingstocks.

If that were me, I'd want to crawl in a hole.  Permanently.

So that's today's contribution from the I Really Don't Understand Humanity department.  I'm far from perfect, but a long habit of honesty combined with a hatred of being embarrassed render this sort of thing a sin I'm hardly even capable of comprehending.  So I wish the Frys the best of luck dealing with their two-foot-tall abusive pillowcase incubus.  If they are telling the truth, that's gotta suck.
Posted by Gordon Bonnet at 2:56 AM