May Texas be safe from tigers

Well, this is it, folks.  Jade Helm 15, the two-month United States Army training exercise in Texas and New Mexico, has begun.  The guillotining of innocent civilians should begin presently. 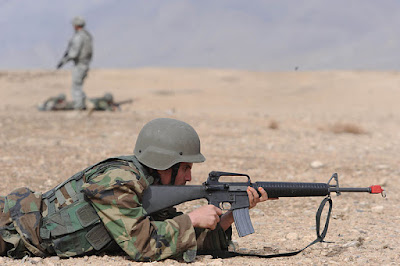 At least, that's apparently what a significant percentage of Texans believe.  There are numerous conspiracy theories regarding what appears to be a completely legitimate military operation, under the supervision of senior officers who assure us that every effort will be made to prevent the exercise from interfering with the lives of ordinary citizens, to the point that an article about the various angles on the conspiracy appeared in Army Times online magazine.  The author, Kyle Jahner, outlines them thusly:

Far be it from Texans to take any of that lying down.  So it will probably surprise no one that a group in Texas has formed a "Counter Jade Helm" citizen surveillance group, intended to keep an eye on things and report back when decapitations start occurring in Walmarts and the headless bodies are carted away in ice cream trucks.

The whole thing is being run by a guy named Pete Lanteri, a dubiously-sane former Marine who claims he founded Counter Jade Helm in order to keep an eye on things and make sure that there was someone watching what the government was up to, but whose recent behavior makes him sound like a dangerous lunatic.  When Lanteri got trolled on Facebook -- because that never happens, right? -- he responded both on Facebook and Twitter with a string of invective that certainly doesn't help his case any.  He began by closing the Counter Jade Helm Facebook page to the public with the following friendly message:

Since the huge media attention Counter Jade Helm is receiving, the fb page is being attacked by libs, conspiracy nuts, and the other 90% of useless fucking Americans.  To fix this I am creating individual state group pages closed to the public.

When a supporter responded, "They are causeing [sic] such a division in this GREAT NATION a second REVOLUTION IS NEEDED VERY BADLY," Lanteri said that basically, he couldn't agree more.  "I can't wait to kill thousands of these fucks, man!!!" he wrote.

In other bons mots from Lanteri, we have:


Here's hoping we're in a shooting war to save this country by next Fourth of July!!!!  Semper Fi Patriots!!!!

People you should all be making lists of commies/marxists/islamists in your neighborhoods.  All the teachers, school board members, politicians etc. who are anti US Constitution need to be identified and addresses known so when it comes time to round them up we know exactly where to start looking.  They will be arrested and tried for treason!!!!

Why can't Geraldo Rivera, aka twatwaffle, be in a church when it gets shot up?

About African Americans in general, he had the following to say:  "War on White People continues!!!!  [Blacks are] a Failed Race."  He even attacked Pope Francis, regarding his stance that weapons manufacturers were complicit in the escalating worldwide death rate from guns, saying, "Fuck this asshole!!!  EVERY ASPECT OF AMERICA NEEDS A FUCKING PURGE!!!!"

[N.B.:  I may have miscounted the number of exclamation points, but otherwise, these quotes are as written.  And yes, apparently he does think that Pope Francis lives in the United States.]

So here we have a man who is apparently in favor of murdering members of a political party that makes up about half of American citizens, who is apparently a vicious racist, who wants anyone who disagrees with him tried for treason, and who is hoping for a violent revolution, leading a group that is monitoring heavily-armed military men engaged in a Special Ops training exercise.

Nope, I see nothing whatsoever that could go wrong with that.

So we've got to make it till the end of August without an incident, which I hope fervently will be the case.  But you know what's craziest about all of this?  If what military leaders are saying is true -- that Jade Helm really is just a training exercise -- and nothing untoward happens, all it's going to do is reinforce Lanteri's conviction that it was their vigilance that prevented the Evil Convoy of BlueBell Ice Cream Trucks from doing their dirty work.  Because you can't win with these people, you know?  No matter what happens, they never shift their ground.

Just yesterday, in fact, I saw a post on Facebook about how during Obama's presidency, the number of gun sales has increased.  The comment was something like, "Ha!  Obummer's efforts to repeal the Second Amendment and pass laws to take away everyone's guns sure have been successful!"

Or maybe, you moron, he never intended to repeal the Second Amendment in the first place.  But of course, I'd never expect you to admit that.

It's like the old story about the guy who would show up at his friend's house for a visit, but before entering the house would fold his hands in a prayerful attitude, close his eyes, and say, "May this house be safe from tigers."  This went on for some time, and finally the friend had had enough.

"Come on," he said.  "Tigers?  This is Ohio, for pete's sake.  There's probably not a tiger within a thousand miles of here!"

And the guy gave him a contented smile and said, "It works well, doesn't it?"
Posted by Gordon Bonnet at 3:22 AM