I'm all for scientific advances, but sometimes I read things that are just plain scary.

This week's installment of "You Do See How Badly This Could Go Wrong, Don't You?" comes to us courtesy of a team led by Miguel Nicolelis, a neuroscience researcher at Duke University.  Rahwan, Nicolelis, and their team have achieved something pretty spectacular -- they have hooked together the brains of four rats via a computer interface, and demonstrated that the conjoined brains could learn (quickly) how to team up and work collaboratively.

In other words, the four minds were pooling resources and working as a unit.

They did the same thing with two monkeys, linking them via a computer interface hooked to a robotic arm.  The trick was, one monkey could only move the arm vertically, and the other only horizontally, so they had to learn to work together to accomplish a task and get a reward.

"They synchronise their brains and they achieve the task by creating a superbrain – a structure that is the combination of three brains," Nicolelis said.  "We send a message to the brains, the brains incorporate that message, and we can retrieve the message later."

Nicolelis calls this linked group of brains a "brainet."

Other scientists were quick to point out that what Nicolelis and his group had accomplished was similar to parallel processing by computer systems.  "In order to synchronise, the brains are responding to each other," said Iyad Rahwan, computer scientist at the Masdar Institute in Abu Dhabi.  "So you end up with an input, some kind of computation, and an output – what a computer does."

Andrea Stocco, researcher in the Department of Psychology and Brain Sciences at the University of Washington, was impressed by what Nicolelis and his team had done.  "This is incredible," Stocco said.  "We are sampling different neurons from different animals and putting them together to create a super organism....  Once brains are connected, applications become just a matter of what different animals can do.  We can expect a great deal more from human minds connected in this way...  Sometimes it’s really hard to collaborate if you are a mathematician and you’re thinking about very complex and abstract objects.  If you could collaboratively solve common problems [using a brainet], it would be a way to leverage the skills of different individuals for a common goal."

Which all sounds great, until you start considering the possible ways this could go wrong.  Maybe I'm a pessimist, but my first thought wasn't about transmitting my abstruse mathematical arguments to another person -- it was about loss of privacy, and (worse) the potential for one person to control another.  If it becomes possible to link two human minds together, what's to stop one of them from manipulating the other, unwittingly or deliberately?

My feeling is that once that link is established, the two minds thus conjoined would never be the same again -- even after the link was severed.

It's why I've always thought that of all the alleged psychic phenomena out there, telepathy has to be the scariest.  Think about it: would you really want someone to have access to your thoughts?  I'm pretty sure that the chaotic, bizarre, and sometimes not very nice thoughts that come to my mind aren't that far out of the norm, but I still would prefer to keep them to myself, thank you very much.

But what about the potential for speeding up information transfer?  I still remember when I saw the movie The Matrix the first time, how much I wanted one of those portals in the back of my skull.  You know, just stick a USB cable up there, and click "Download Japanese," and voilà, I'm fluent.  It'd sure be nice to gain knowledge that way, rather than by the hard work of memorization, study, and figuring things out, however it would put us teachers out of a job. 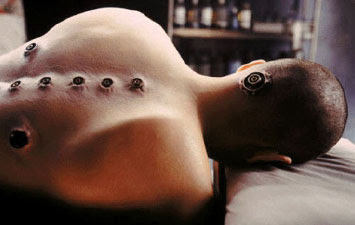 But once you become able to put stuff into brains -- whether downloaded from a computer, or accessed from another person's mind -- there arises the trenchant question of who gets to decide what information goes where.  How do you assure that what is being passed to you is true?  When we learn, the slow, painstaking way, each of our brains not only acts as a sponge, it acts as a filter.  We consider what we're learning, ask questions, make judgments.  If we're being fed information through a computer interface, at what point in the transfer process do we get to ask, "Does this make sense?"

Don't get me wrong.  I don't think these ethical questions should halt the research Nicolelis and his group are doing, and I don't mean to denigrate his accomplishment.  But as tempting as it is to rush headlong into linking up human minds into a "superorganism" or "brainet," I'm certainly not going to be the first one to volunteer.

Call me suspicious, but the only one I want in control of what I'm thinking is myself.
Posted by Gordon Bonnet at 2:30 AM