I guess it was too much to hope for that the opponents of marriage equality would say, "Oh.  I guess it's the law of the land now, and we lost.   Bummer."  And disappear gracefully.

Things are never that easy, are they?  The dire threats of what's gonna happen to us, now that we've allowed LGBT people to have the same rights that the rest of us have always had and completely take for granted, are already ringing from the rafters.

First we had the ever-grim Franklin Graham, informing us that now that the Supreme Court has legalized same-sex marriage nationwide, there's gonna be hell to pay:


I’m disappointed because the government is recognizing sin.  This court is endorsing sin.  That’s what homosexuality is – a sin against god...  Arrogantly disregarding God’s authority always has serious consequences.  Our nation will not like what’s at the end of this rainbow...  The President had the White House lit up in rainbow colors to celebrate the Supreme Court ruling on same-sex marriage.  This is outrageous—a real slap in the face to the millions of Americans who do not support same-sex marriage and whose voice is being ignored.

Graham wasn't the only one who keyed in on the whole rainbow thing.  Over at Answers in Genesis, Ken Ham took a moment away from building a new Ark to make the following cheery assessment:


The president did not invent the rainbow; God invented it, and He put the rainbow in the sky as a special reminder related to Noah’s Flood.  God had sent the global Flood in Noah’s time as a judgment because of man’s wickedness in rebelling against the Creator...  (T)he rainbow was set up by God as a sign to remind us that there will never again be a global Flood as a judgment.  But one day there will be another global judgment—the final judgment—and it will be by fire...  (W)e need to take back the rainbow and worship the One who invented the rainbow, and every time we see it be reminded of its true message.

Which brings up a point I've never understood.  How does the whole Flood thing lead anyone to think that Yahweh of the Old Testament is worthy of worship?  It's more the action of a genocidal maniac, in my opinion -- killing everyone and everything, infants and children included, because of some perceived wickedness that couldn't be fixed any other way.

Oh, but rainbows!  There are rainbows, so it's all okay!

Isn't this a little like saying, "Hey, dude!  I know I drowned your family and pets and livestock and all, but look, here's a pretty rainbow in the sky as my promise I won't do it again!"  *glowers*  "At least not that way.  I might still start a fire and burn them all alive.  But if you bow down and worship me exactly the right way, I might let you slide, this time."

Doesn't that make you want to shout hallelujah at god's infinite goodness?

But no one demonstrated quite so clearly the truth of the old definition of Puritanism as "the desperate fear that somewhere, people are enjoying themselves" as Wayne Allyn Root.  Root, you may recall, is the one who said that the only way that Obamacare was upheld by the Supreme Court is that the president blackmailed Justice Roberts.  And now, Root has made a rather bizarre pronouncement -- that same-sex marriage is wrong, because marriage isn't about happiness:


Marriage is the most difficult thing in the world.  I’m talking to you as someone who has been married 24 years, marriage is so difficult that if you do not go to church every Sunday and your whole life isn’t built on a bedrock faith in God and you don’t have kids and your whole life isn’t built around those kids and none of that’s in place and you’re married, the odds of you staying married are close to zero.  Divorces will now triple.  Gays will never stay married.  They just bought themselves the biggest bunch of unhappiness and legal bills that they could ever imagine.

"Go ahead, LGBT people," Root seems to be saying.  "I hope you're satisfied.  Now you get to be just as miserable as the rest of us."

You have to wonder what his wife thought when she read this, don't you? 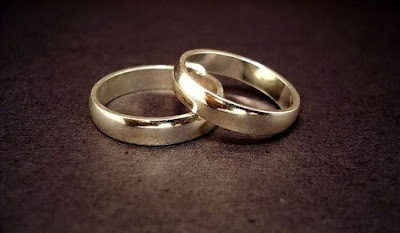 Besides just being ridiculous, his statement is actually exactly the opposite of the fact.  The highest divorce rates aren't among atheists.  The highest divorce rate of any of the main religious affiliations is the Baptists, at 29%.  (Atheists are at 21%, tying the virulently anti-divorce Catholics.)  Regionally the highly religious Southeast and Midwest have the highest numbers of divorces, with Tennessee, Alabama, Arkansas, and Oklahoma topping the list.

Kind of funny, when the bible is even more unequivocal about divorce being sinful than it is about homosexuality.  Consider Luke 16:18: "Anyone who divorces his wife and marries another commits adultery, and whoever marries a woman divorced from her husband commits adultery."  And adultery, recall, was punishable by being stoned to death.

And yet, the ultra-religious aren't pressuring the courts to make divorce illegal.  Funny thing, that.

So anyway, I'm sure we haven't heard the last of this.  We'll be revisiting it frequently, not only when individual clerks of court refuse to issue marriage licenses to LGBT couples (something that has already started) but every time there is a natural disaster, at which point we'll hear all about how it's "god's wrath."

I wonder what god will pick as a symbol this time that he still loves us even though he's willing to smite the shit out of us at the drop of a hat?  After all, he's already used rainbows.  Maybe flowers, you think?  Flowers are nice.  "I'm sorry you deserved being beaten to a pulp," he'll say.  "Here, have a dozen roses.  All better now?"
Posted by Gordon Bonnet at 2:03 AM