When evaluating a claim, it's often as important to recognize which questions to ask as it is to understand the science behind the claim itself.  What information did the author leave out -- intentionally or unintentionally?

The reason this comes up is an online article sent to me by a loyal reader of Skeptophilia entitled, "Studies Reveal 'Smudging' Eliminates Dangerous Bacteria in the Air."  The article describes the practice of "smudging," the burning of sweet-scented dried plants, and claims that the smoke is beneficial because it kills bacteria.  (S)he cites an earlier study, published in 2007 in the Journal of Ethnopharmacology, which has the following passage:


We have observed that 1 hour treatment of medicinal smoke emanated by burning wood and a mixture of odoriferous and medicinal herbs (havan sámagri=material used in oblation to fire all over India), on aerial bacterial population caused over 94% reduction of bacterial counts by 60 min and the ability of the smoke to purify or disinfect the air and to make the environment cleaner was maintained up to 24 hour in the closed room.  Absence of pathogenic bacteria Corynebacterium urealyticum, Curtobacterium flaccumfaciens, Enterobacter aerogenes (Klebsiella mobilis), Kocuria rosea, Pseudomonas syringae pv. persicae, Staphylococcus lentus, and Xanthomonas campestris pv. tardicrescens in the open room even after 30 days is indicative of the bactericidal potential of the medicinal smoke treatment.  We have demonstrated that using medicinal smoke it is possible to completely eliminate diverse plant and human pathogenic bacteria of the air within confined space.

So far, so good.  Assuming that the experiment was well-controlled and that there were no obvious design flaws invalidating the results, getting rid of pathogenic bacteria is certainly a good thing.  The author of the first article sums up thusly:


The basic concept is that by burning particular plants parts and resins, the energetic blueprint or spirit/intelligence of that plant is released, producing a medicinal smoke.  The smoke is then utilized to cleanse the energy of individuals, groups, spaces or object.  Herbs like Sage, Palo Santo, Copal, and Sweet-grass are common smudging herbs that are widely used for healing and to remove unwanted energetic and spiritual buildup and also to instill blessings...  Thanks to this amazing study we now know that smudging with sacred herbs is not only soothing to the mind and spirit, it is affecting the health and even safety of the actual environment in which it is done.

Setting aside the whole "energetic blueprint" and plant intelligence nonsense, there are a few questions that come to my mind that neither the author of the original study, nor the author of the post lauding its results, thinks to ask:

So let's look at these questions one at a time.

For the first question, there were a lot of hyped-up articles like "There's a Time Bomb Ticking in your Household Dust" that presented a lot of scary stuff (like electron micrographs of dust mites, which look like a cross between a crab and that thing that burst out of the dude's chest in Alien) but little in the way of verifiable detail.  I did find an interesting article by Dr. Harriet Burge, director of aerobiology for EMLab P&K, a New Jersey-based indoor air quality assessment lab, and she had the following to say:


I generally do not recommend bacterial analysis of house dust except in a few unusual situations.  This is because we don't know how to interpret the results.  However, we do receive occasional requests for cultural bacterial analysis of house dust.  These analyses are done by dilution culture and data can be presented as total bacteria, general groupings of bacteria (i.e., Gram negative, Gram positive, Bacillus), sewage screens (total coliforms, Enterococcus, etc.) or species identification for the most abundant colonies.  Sewage screens usually involve presence or absence in house dust.  Otherwise, interpretation is based on the number of colonies present per gram of dust, and/or the relative composition of specific bacterial groups or specific organisms in the dust.

Given that these requests are not rare, it seems appropriate to develop some interpretation guidelines, at least with respect to average or "usual" populations in house dust.  Unfortunately, few studies have been done documenting concentrations of total culturable bacteria or of any specific organism or group of organisms.  In my experience, these studies are rarely done because the dynamics of exposure to house dust are not clear, and because dust is not considered to contain human pathogens (or at least dust is not considered the primary source for human pathogenic bacteria).

So given that household dust isn't the most common source of transmission for human pathogens, it's unclear whether sterilizing the room would, under most conditions (i.e. we're not talking about an operating room here), lower the incidence of disease. 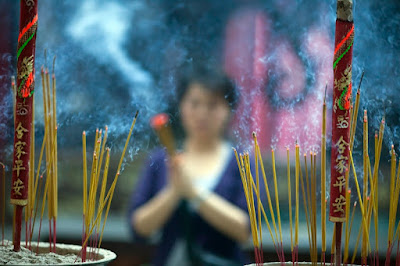 On to the second and third questions, which are related.  On a quick search, the first thing I turned up was a paper from Clinical and Molecular Allergy by Ta-Chang Lin, Guha Krishnaswami, and David S. Chi entitled, "Incense Smoke: Clinical, Structural, and Molecular Effects on Airway Disease" which had the following to say:


Incense smoke (fumes) contains particulate matter (PM), gas products and many organic compounds.  On average, incense burning produces particulates greater than 45 mg/g burned as compared to 10 mg/g burned for cigarettes.  The gas products from burning incense include CO, CO2, NO2, SO2, and others.  Incense burning also produces volatile organic compounds, such as benzene, toluene, and xylenes, as well as aldehydes and polycyclic aromatic hydrocarbons (PAHs).  The air pollution in and around various temples has been documented to have harmful effects on health.  When incense smoke pollutants are inhaled, they cause respiratory system dysfunction.  Incense smoke is a risk factor for elevated cord blood IgE levels and has been indicated to cause allergic contact dermatitis.  Incense smoke also has been associated with neoplasm and extracts of particulate matter from incense smoke are found to be mutagenic in the Ames Salmonella test with TA98 and activation.

So there's that.  I tried to find any studies of white sage (Salvia apiana) and sweetgrass (Hierochloe odorata) -- two of the most common plants in smudge sticks -- to see if either had been studied for toxic effects.  Nothing turned up.  There was lots of stuff about expelling negative vibrations, however.  So this one falls into the "we don't know" category.

On the other hand, it's pretty clear that smoke in general -- even wood smoke -- shouldn't be inhaled.  Incompletely-burned plant material contains polycyclic aromatic hydrocarbons, organic compounds that have been identified as not only carcinogenic and mutagenic, but also directly toxic.

So in the end, we're left with more questions.  On the one hand, incense and smudging smoke smells good and seems to kill nasty bacteria, which is good.  On the other, the bacteria that it kills almost certainly would never have made you sick in the first place, and the smoke is also potentially dangerous for you to inhale, which is bad.  In the final assessment, smudging your house if you have adequate ventilation is probably not going to hurt you, but isn't really going to do much to help you, either, unless you believe in "negative vibrations."

And in the even-more-final assessment, what we really should be doing, even more than burning dead plants in our houses, is asking questions.  Not simply buying whatever you read at face value -- in other words, recognizing that there are questions to be asked -- is the first step.
Posted by Gordon Bonnet at 3:30 AM